They may still be a novelty for some, but virtual assistants look set to become labour-saving, revenue-generating additions to UK organisations

The digital virtual assistant or VA is shaping up to become a cornerstone of the post-app world. “In the not-too-distant future, users will no longer have to contend with multiple apps; instead they will literally talk to digital personal assistants such as Apple’s Siri, Amazon’s Alexa or Google Assistant,” says Mark O’Neill, research director at Gartner.

Gartner predicts that by 2019 at least a quarter of households in developed countries will use VAs. And as they become more popular, they are evolving to reflect users’ preferences and incorporate new technology.

VAs are personalised cross-platform devices that work with third-party services to respond instantly to a user’s requests, which could include online searching, purchasing, monitoring and controlling connected devices, and facilitating professional tasks and interactions.

This type of artificial intelligence or AI-powered assistant provides genuine user-centricity as its natural language processing (NLP) and machine-learning capabilities mean its responses reflect user preferences in real time and evolve with each interaction. 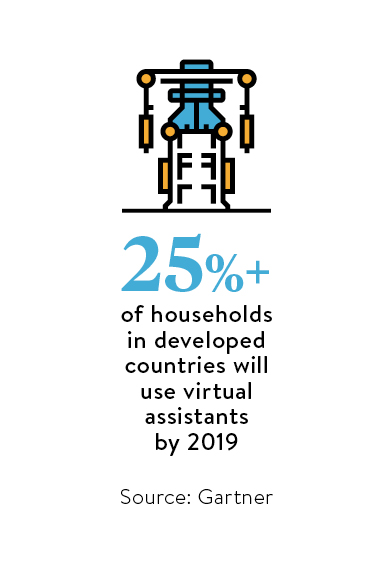 While some businesses provide their own VAs, others make their services and data available on mainstream platforms. For example, you can use Siri or Alexa to call an Uber.

So-called conversational commerce offers instant consumer gratification and instant revenue for businesses. And there are parallel advantages within the enterprise as instant responses to queries improve productivity and job satisfaction.

A significant development in the VA market is the voice-only interface which started on smartphones – Siri, Cortana and Facebook Messenger’s M.

Next-generation VAs are moving on from apps. At TechCrunch Disrupt, Siri’s co-creator Dag Kittlaus gave the first public demo of Viv, which replaces apps by using NLP and dynamic program generation to write new software in real time in response to each natural language command.

Unlike Siri, Viv can deal with follow-up questions. This is an example of what Harrick Vin, vice president and chief scientist at Tata Consultancy Services, and inventor of ignio, an AI engine which converts IT operations into intelligent software, describes as “service-as-a-software”.

The internet of things, ranging from connected appliances and smart environments to cars and smart cities, has accelerated use of the standalone intelligent speaker. Amazon’s Echo has sold some three million units and there are plans to ship another ten million. Like Siri and Cortana, Echo’s virtual assistant Alexa uses a voice-only interface.

In May, Google announced Google Home, an Alexa rival that will tie in with Google’s services and platforms, including Google Assistant, which unlike Siri adds context to conversations.

The voice interface facilitates multi-tasking. “Voice enables unbelievably simple interactions with technology and customers love the convenience of being able to listen to music using only their voice, setting alarms and asking for information when their hands are busy, listening to the news in the morning as they get ready for work, and so much more,” according to a spokesperson from Amazon Alexa.

Businesses recognise the potential of gateway VAs that interface with multiple services and standalone VAs that complete specific tasks. One example is x.ai’s Amy Ingram, which works with Google Calendar, Office 365 and Outlook.com to schedule meetings “nearly autonomously”, says founder and chief executive Dennis Mortensen. Users copy amy@x.ai into an e-mail and the VA liaises with the other party via natural language e-mails.

“Cortana works across all my devices. She knows my schedule, so she lets me know when I need to leave one meeting to get to my next appointment. Potentially, she could suggest flights and hotels as soon as I add a trip to my schedule, and connect me with colleagues working on relevant topics.”

Apple announced at its Worldwide Developers Conference that Siri will be coming to desktop and laptop computers, enabling users to search for photos, documents and music via voice commands, and switch seamlessly between Apple devices. For example, Apple Watch users will be able to log in to their Macs without a password.

Google recently launched Springboard, its digital assistant for enterprise customers, which “helps you find the right information that you need at the moment that you need it”, according to Prabhakar Raghavan, vice president of engineering for Google Apps. “It searches quickly and easily across all your information in Google Apps and… assists you throughout your workday by proactively providing useful and actionable information and recommendations,” he says. 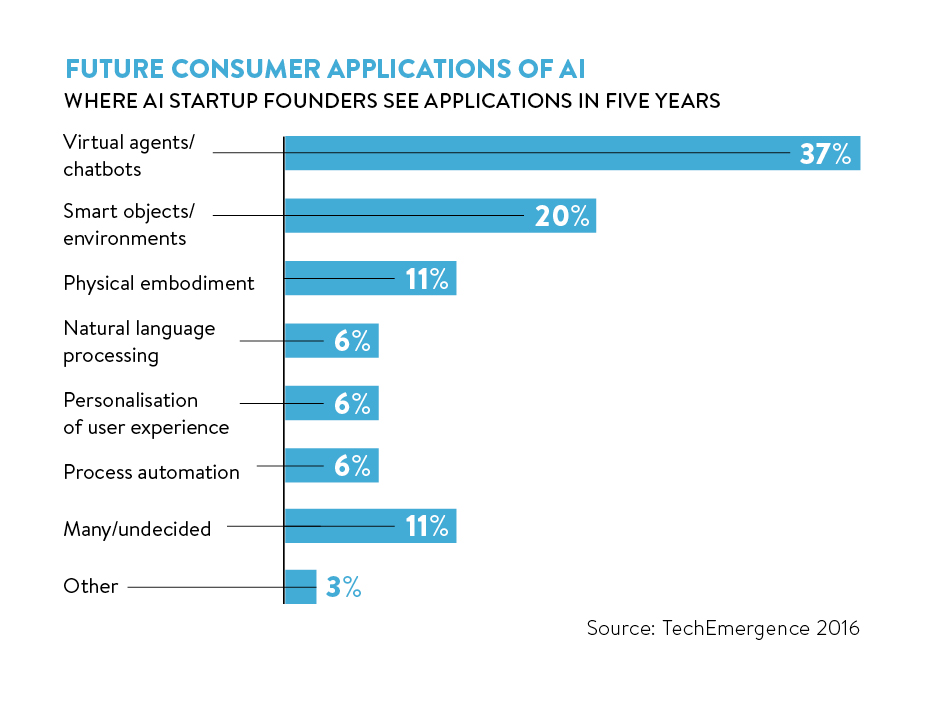 Although voice is not always the appropriate interface, Echo is proof that people engage with online services without a screen. Amazon Alexa is building prototypes with multiple verticals and industries.

Kate Boeckman and Jennifer Singh, of Thomson Reuters’ applied innovation group, are working on integrating billable hours tracking for lawyers, as an extension of their existing voice-activated app via the Eikon platform and access to publishing content, into the Alexa platform.

Dave Cox, head of innovation at M&C Saatchi, believes that VA take-up by business will be driven by added value. “A lot of our lives will be managed by VAs because businesses will realise infinite economies of scale. Gradually, bots will take over straightforward tasks and, when we look back in ten years’ time, we will realise that half the stuff we’ve delegated to machines used to be done by people,” he says.

At Microsoft, Mr Coplin says the main challenges are around asking the right questions, as well as trust and control. This could include how far personalisation can go before the “uncanny valley” phenomenon – disengagement with things that appear nearly human – kicks in, particularly in relation to business applications.

x.ai’s success suggests that automation is becoming more acceptable in a business context. But Ms Singh at Thomson Reuters believes VAs are limited because they are not yet able to engage in continuous dialogue. Microsoft’s Tay incident earlier this year, when the AI chatbot released controversial tweets on Twitter and was taken offline, illustrates that VAs need to be positioned carefully so they learn from appropriate interactions.

Mr Cox offers another, more philosophical, dilemma. He points out: “There is something satisfying about completing a technical task perfectly, but those logical tasks are exactly the ones that will be easy for businesses to hand over to VAs.”