“We’re at the crossroads for humanity. It could be our best century, but it could also be our worst because our capabilities of spreading risk are greater than ever before.” That’s the chilling conclusion of Professor Ian Goldin, director of Oxford University’s Oxford Martin School, dedicated to the study of future sustainability.

Professor Goldin was closely involved in the creation of this year’s World Economic Forum (WEF) Global Risks report, which for the first time listed interstate conflict in its top five list of risks in terms of likelihood. And not just that, it put it at number one.

“In the 25th year after the fall of the Berlin Wall, geopolitical risks are back on the agenda,” the report warns. More worrying still, the panel of 900 worldwide business, governmental and academic leaders that the WEF surveyed in creating the report cited another unwelcome newcomer, water crises, followed by global pandemics and the consequences of failing to prepare for climate change as the leading risks by their likely level of impact. 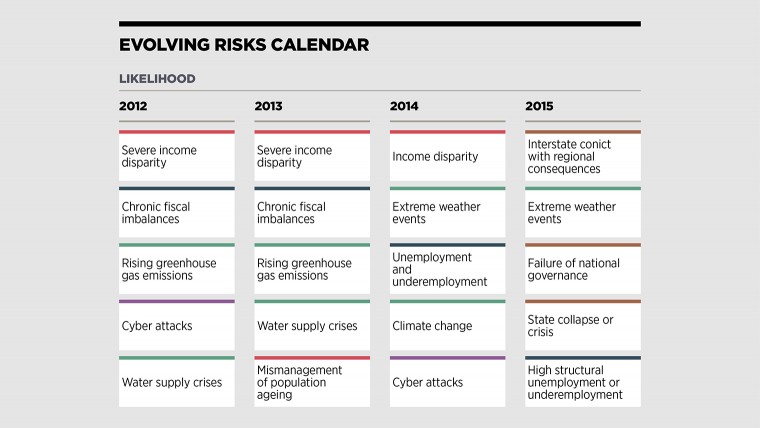 “The nature of risk is changing,’ says Professor Goldin, co-author of The Butterfly Defect: How globalization creates systemic risks, and what to do about it. “The walls have come down between societies. Something that happens on the other side of the world can quickly cascade and impact us. There’s a growing complexity, a growing integration and it leads to a fundamentally different nature of risk. That’s the butterfly defect, where small events elsewhere in the world will fundamentally affect our lives.”

Yes ladies and gentlemen, the four horseman of the apocalypse are now knocking at your firewall and can be at your doorstep inside 48 hours from anywhere in the world, carrying their antibiotic-immune infections, courtesy of global aviation connectivity.

If that wasn’t bad enough, the economic risks we’re all too familiar with haven’t gone away either. Instead, they’re being masked by the escalated threat from geopolitics and global diseases such as Ebola. “That creates a much more challenging cocktail for companies to deal with,” says Richard Smith-Bingham, director of the Global Risk Centre at Marsh & McLennan Companies, an international risk management and insurance firm, which partnered with the WEF on the report.

Look at the underlying factors, such as social uncertainty, rising powers and economies, rapid technological advances and climate change – the fundamental drivers of change in the world

What then can business leaders do in the face of such unremitting interconnected challenges? Well, as old soldiers know, time spent in reconnaissance is seldom wasted. First, if you have an international presence, supply chain or are investing overseas, you need to do your geopolitical due diligence.

So says Margareta Drzeniek-Hanouz, lead economist and head of the global competitiveness and risks team at the WEF. This will help tell you what might be coming your way, but it’s only part of the answer. “Some of the risks you can only prepare for,” she cautions. “Geopolitical risks are very difficult for the business community to mitigate.”

Since three of the top risks most likely to happen are geopolitical, something else needs to be done – without delay. Mr Smith-Bingham says: “Companies should really think about these endogenous risks in a more fulsome and diverse way.” Don’t just look at the headline macroeconomic indicators, he cautions, look at the underlying factors, such as social uncertainty, rising powers and economies, rapid technological advances and climate change. ‘”They’re the fundamental drivers of change in the world at the moment,” he says.

Take these and build plausible scenarios assuming that one of them happens. Next, ask what would happen if a second event occurred at the same time. “It’s about kicking the tyres against your own risk resilience to understand your own vulnerability,” says Mr Smith-Bingham, pointing out that reputational risk is also ever present.

And if you don’t like what you find, he adds: “You either need to protect your chosen strategy by building in more buffers or it’s about changing your strategy, diversifying by geography or product, ensuring that you’re not in areas that could actually blow up in your face.”

So how do you go about assessing global, regional, country or local risks? Government can help, both at home and through the overseas network of embassies, for instance. Then there are overseas governments themselves, which businesses should engage with.

Amy Gibbs, a senior consultant who analyses country risk at the UK insurer JLT, says her firm advises clients to take a holistic approach. “You can’t really understand how the risk of terrorism is going to change in the future unless you are looking at political and economic circumstances as well,” she says.

As a result she advises clients to engage national, local and even traditional power brokers in-country to build a picture of what’s going on. Don’t leave out opposition leaders either, since they could potentially tear up any agreements you have after the next election or coup. Ms Gibbs suggests pairing up with international bodies such as the World Bank’s investment arm, the International Finance Corporation (IFC). They have expertise, plus: “If you are in dispute with your host government, having IFC involvement in a project can help with leverage,” she says.

Finally, don’t overlook non-governmental organisations (NGOs), which are not always the first port of call for business leaders. “NGOs have knowledge that very few other organisations will have,” Ms Gibbs points out. “They understand the local nuances, where the risk environment is heading and are another source of information that corporates can use to build up a picture of risk.”

If governments at all levels and NGOs can help grow your appreciation of the risk landscape at home and abroad, they can also help you begin to relandscape it, too. Up to a point, at least.

Take climate change, where corporates have been working with governments and the United Nations to come up with a strategy for the world, or the B20 gathering of global business leaders’ organisations, which holds summits to advise the major G20 powers on policy initiatives.

Elsewhere, as Mr Smith-Bingham notes, his organisation has worked with the UK’s Cabinet Office on ways to reduce the challenge of cyber crime. And in its 2015 Global Risks report, the WEF cites an example of a multi-stakeholder approach to modelling water flows in Australia’s Murray-Darling Basin, which supplies drinking water for two million people. The model is crucial for providing credible data that can be used to manage this vital resource more sustainably. The WEF, says Dr Drzeniek-Hanouz, expects to see this sort of collaboration to increase exponentially.

“It’s those corporates with the attitude that they can shape the risk environment they operate within that will typically do better,” adds JLT’s Ms Gibbs.

But if engagement is the key, there are challenges. A high barrier to effective strategic collaboration between corporates, government, and local and international bodies is trust. Mr Smith-Bingham says it’s about having the right infrastructure, established relationships and safeguards in place so companies are comfortable about sharing their information, for instance on cyber crime events, for the greater good. “Governments and business can interact to ensure there is a more resilient business eco system,” he says.

And Professor Goldin of Oxford Martin School agrees, though he sees it as being even more fundamental than that. “What we’re seeing in the politics of the UK and many countries is people feeling very uncertain about the future and globalisation,” he says. “For any corporate leader, this is very dangerous because there’s a chance we might reverse the advantages of globalisation. Businesses must be more engaged not only in managing the risks, but in managing the understanding of society.” And that goes for governments too.