While the days of broad-shouldered stevedores manhandling cargo nets to the quayside may have slipped by in our maritime past, few could have anticipated that the time when a ship could arrive in port to be unloaded without a human being in sight would arrive so quickly.

Yet this is exactly the scenario being predicted for the harbour at Caofeidian, a reclaimed chunk of land 200km east of Beijing. Port bosses say that by the end of the year the facility will be completely autonomous, with ships loaded and unloaded by automatic cranes, and containers driven away by self-driving trucks, all co-ordinated from a central remote-control room.

With their restricted, confined roadways, lack of pedestrians and predictable driving scenarios, ports are the perfect proving ground for autonomous vehicles. Europe’s biggest port, Rotterdam, is being used to test the concept of truck-platooning in which a series of unmanned trucks follow a lead vehicle, mimicking the actions of its driver. These small convoys make for a smoother traffic flow, as well as cutting CO2 emissions.

Technology is driving other changes in Rotterdam too, as the port gears up to receive autonomous vessels by 2025. Working with IBM and Cisco, port authorities are creating a new digital dashboard to replace traditional radio and radar communications between captains, harbour pilots and terminal operators.

The system will use a complex array of internet of things (IoT) sensors to collect data around tidal streams, wind strength and visibility, helping to reduce vessel waiting times and automatically guiding the crewless ships into berth.

“We are taking action to become the smartest port in the world,” says the port’s chief financial officer Paul Smits. “Speed and efficiency is essential to our business, and requires us to use all the data available to us.”

It is estimated that using this real-time information could save operators as much as $80,000 each time they dock a vessel.

Embracing automation could create jobs, as well as eliminate them

In the UK, DP World London Gateway is also embracing automation. The state-of-the-art deep-sea port on the lower reaches of the Thames is home to 12 of the world’s largest ship-to-shore cranes, colossal 138m giants which can be controlled remotely as they unload four 20ft containers at a time.

The remote-control cranes bring operational efficiencies and because they’re unmanned, the port can continue to run when high winds make it too dangerous for traditional cranes to operate and force other ports to close.

In addition, the port has 60 automated stacking cranes, unique to the UK, which run up and down tracks straddling the containers, stacking them dockside. The cranes also load and unload around 1,800 trucks a day using sensors and sophisticated cameras, all in a bid to get goods on the road as quickly as possible.

“It’s all about speeding things up and meeting the demand from online consumers, who now expect next-day delivery,” explains Matt Abbott, the port’s head of communications. “We are constantly testing new initiatives. Automation across the port is becoming more and more prevalent.”

Although Mr Abbott is quick to add that docks are still major employers and, while automated cranes may no longer need drivers, the complex machinery is creating more maintenance and engineering jobs.

Tim Morris, chief executive of the UK Major Ports Group, agrees and says the automation of ports is ushering in “a trend towards better jobs, more highly skilled jobs and safer jobs”.

It’s about upskilling, he continues, with digital technology and artificial intelligence taking care of physical tasks, such as moving containers, leaving operators to concentrate on more complex roles.

Another technology being trialled by some ports is the digital twin. This virtual version of the port enables operators to run different scenarios, using real-time information to improve decision-making and problem-solving, and support predictive planning.

Data, information and how it’s handled will be at the core of the way ports operate in the future, says Mr Morris. “Ports are global gateways for physical traffic and there is a role for them as digital gateways as well,” he says.

Take an imaginary widget, which could pass through around 30 different stages moving from Chengdu in China to Wolverhampton.

“Digitisation can streamline this, reduce the number of stages, make it contractually a lot simpler and a lot smoother,” he says. “The greater level of visibility also makes the physical transfer more efficient. Better data flow means better predictability about where the widget is going to be at any given time.” 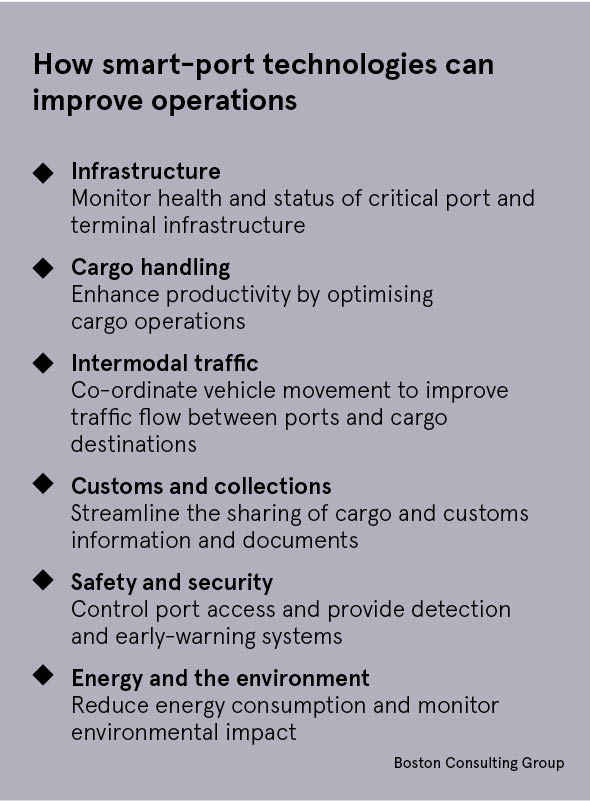 Which leads to blockchain, described by Jody Cleworth, chief executive of digital logistics business Marine Transport International, as “the buzzword of the logistics industry”.

The company has recently signed a memorandum of understanding to work with Associated British Ports to create a pilot programme to use blockchain technology to improve port connectivity.

Blockchain offers a way of securely linking the disparate systems that shippers, port operators and hauliers use to record and track goods, also reducing the time spent manually re-entering data.

“Blockchain-enabled technology has the potential to provide a transparent, secure and accurate way of capturing and sharing data with key parties,” says Mr Cleworth.

“The logistics industry is awash with proprietary technology that forces users to work in a certain way; with blockchain, we can connect all those systems to ensure data is accurately and quickly shared, helping speed up and simplify the flow of trade in and out of the UK.” 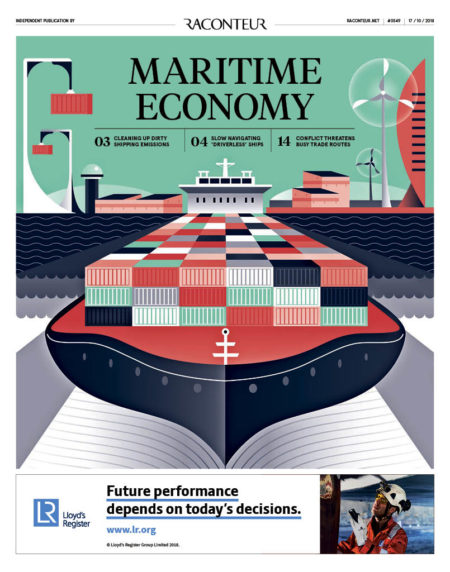