The mention of robotics in finance and accounting might lead many to envisage teams of metal creatures scurrying around an office, rapidly shifting paper from one pile to another. But while such images from science fiction are a million miles from reality, they may be responsible for some of the hype surrounding the concept.

Often when corporate buzz finds its way into everyday parlance, it piques broader consumer interest, but also tends to be simplified, helping to gain resonance with people outside the sector. Typically, this means things get interpreted, or misinterpreted, so buzzwords and phrases are bandied about in a somewhat virtuous circle of hype.

For example, automation and robotics in finance and accounting refer to pretty much the same thing, don’t they? Surely, both can take over processes that would benefit people working in the finance department.

But Andromeda Wood, senior director of data modelling at US-based Workiva, says: “Many use the terms ‘robotics’ and ‘automation’ interchangeably; when I talk about the two, I think of two different things.

The terminology can make it more difficult for people to understand which bits of technology they need; what they are worried about and where to start

“Robotics is something that’s a very through process, very rigid and rules based that doesn’t really involve the people using it. Whereas we see ourselves sitting more in the automation space, which although very similar, hence why so many mix up the terms, refers to a far more interoperable, customisable process.”

Workiva, a global cloud provider of connected data, reporting and compliance solutions, includes the finance departments of many of the world’s leading banks, pharmaceutical companies, technology, data and media companies, among its clients.

Ms Wood explains that robotics and automation both use computer technology to do rules-based, repetitive tasks, but automation in finance, or any other sector, involves a closer partnership with the workforce.

“The terminology can make it more difficult for people to understand which bits of technology they need; what they are worried about and where to start,” she says.

The evolution of outsourcing

So, where should the heads of finance or IT start? Initially, outsourcing of repetitive tasks was done mainly in developing countries; actions were itemised, ordered and flow charts followed.

Offshore outsourcing still has its place. But for many, the bots embedded in accounting software, rather than physical entities, have overtaken the armies of exceptional and cost-effective back-office support staff found in countries such as India.

The business case is robust. According to the Institute of Chartered Accountants in England and Wales, if you can replace three full-time equivalent (FTE) staff by automating one end-to-end process, the economics for robotic process automation (RPA) software will stack up.

On cost alone, it’s looks like a no-brainer. For example, you can bring down the average cost per FTE by two-thirds by replacing a staff member based onshore with someone offshore, and you can reduce this cost by two-thirds again by replacing them with RPA.

Businesses should not underestimate the human touch

But, despite increasing efficiencies as RPA software further develops, the human touch in business should not be underestimated.

Abigail Burton, director at Burton Varley, an accounting and business advisory firm whose 700 clients are predominantly small businesses, has decided to outsource some of her back-office administration and adopted cloud-based software programmes so she can access her clients, wherever she is the world, on an almost 24/7 basis.

She believes there are certain aspects of her role that could never be replaced by an automated process or software robot. “I could invest £10 million in a robot, but it will never be able to replace the comfort my clients get from knowing they can contact me and have an actual conversation,” she says.

The cloud systems are quicker and more efficient, she acknowledges, but far less personal. “I know my clients; I know where they are in their personal lives, or when a suggestion may be more or less welcomed. I know what their cash flow is like and I’m aware of their situation at any given time. Would a robot? I’m not sure,” says Ms Burton.

How new tech led to transformation in accounting

Ms Brennan, who is responsible for helping clients digitise their finance functions, is also a key member of the team that developed Mazars’ cloud-based accounting platform elev8. This is built around three core apps: Receipt Bank, which uses RPA for data capture; Xero accounting software; and Fluidly for AI-based credit control.

“Receipt Bank pushes the data straight into Xero, removing the manual entry point,” she explains. “A supplier then emails the specified email address, the bot sweeps your inbox to obtain it as a pdf. A recently added function, called Fetch, is for data collection, which goes and gets the invoice for you from more than 2,000 suppliers, drawing on AI and machine-learning, providing the system contains the credentials it is looking for.”

For a more complex business model, a more complex ecosystem would be required. “As soon as you move into a complex industry vertical, you’d look outside those basic applications,” Ms Brennan concedes.

However, as simple or as complex the required ecosystem, one thing is clear: the trajectory of robotics in finance and accounting will free accountants from mundane, repetitive tasks and transform them into managers of bot-based systems. Reskilling, therefore, seems inevitable. 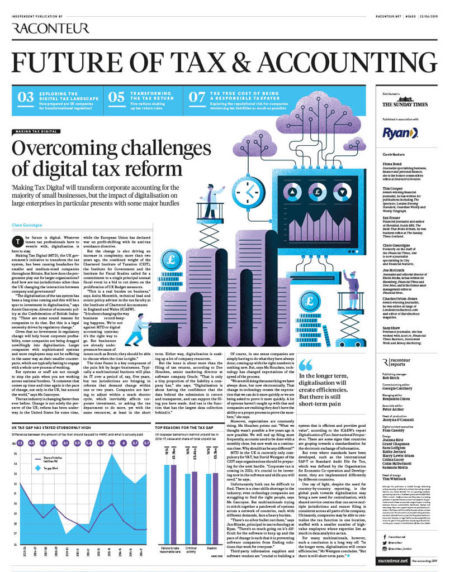