The last decade has seen a raft of reform within the pensions arena. Some, such as the freedom and choice reforms that provide savers with total control of their pension pots after the age of 55, have been revolutionary.

Others have been evolutionary, such as the introduction of auto enrolment, which requires all employers to enrol staff into an occupational pension scheme.

The UK has also moved to a flat-rate state pension that in time will deliver a third more income than the previous system, provided you have full eligibility.

These developments may suggest the UK is on its way to resolving the retirement conundrum of encouraging individuals to save enough to deliver a meaningful income in retirement. However, the recent state pension review by former Confederation of British Industry chief executive John Cridland may scupper the plans of many UK citizens.

The report recommended the state pension age should continue to be pushed back and even rolled out to 68 by 2035, seven years earlier than currently scheduled.

The reasons are simple – we are living longer and this should be reflected in the state pension age if it is to remain sustainable. The cost of providing the state pension is projected to shoot up from 5.2 per cent of GDP today to 6.2 per cent in 2036-37, according to the latest figures from the Office for Budget Responsibility.

That is equivalent to £725 of additional taxation per household each year, says the report. This doesn’t take account of other health and social care requirements that will add an additional 6.8 per cent of GDP to age-related spending by 2066-67, only 1.8 per cent of which is for the state pension.

Things could get worse, too. The triple lock – a guarantee that state pension will keep pace with earnings, inflation or 2.5 per cent, whichever is greatest – is considered an unsustainable yardstick and many argue pensions should be indexed to earnings, so pensions track average salaries instead.

Not everything is rosy for auto-enrolment, either. One area of consensus on pensions policy is that current contribution levels are far too low to deliver any meaningful income in later life. Though the minimum level was due to be increased from 2 to 8 per cent in October, this has been put back to April next year.

Claire Carey, a partner at pensions law firm Sackers, argues is a sensible idea if it aligns the system with the tax year. However, though auto-enrolment has seen 7.8 million workers enrolled since 2012, there are many for whom it simply does not apply.

“There are many different categories of worker who don’t fit into the auto-enrolment regime,” says Ms Carey. “This includes the self-employed, who could retire without much more than the state benefits.”

The imposition of a flat-rate state pension does provide individuals with a clear marker as to the amount of state support they can expect in retirement.

This transfer of risk from institutions to individuals has taken place in the workforce as defined benefit (DB) pensions, which promised a certain income in retirement, have given way to defined contribution (DC), which build a fund to be used to purchase income in retirement.

Though contributions through auto-enrolment remain too low, the structural shifts across the retirement landscape may well compensate for the scheme’s current weaknesses.

“Much of the shortfall may be addressed by many people working longer, either because they feel they cannot afford to fully retire or because they feel capable and do not wish to stop,” says Gregg McClymont, head of retirement savings at Aberdeen Asset Management.

“And if we see a rise of contributions from 8 to 12 per cent or more, we may find that auto-enrolment and the state pension have gone a long way to solving the savings crisis.”

Sir Steve Webb, director of policy at Royal London who as pensions minister in the coalition government was responsible for implementation of both auto-enrolment and the flat-rate pension, takes a similar view.

At around £8,000 a year, the new state pension replaces about one third of national average wages, says Sir Steve. “Those with 35 years of low pay with tax credits will make £8,000 a year, instead of £6,000 on the old system. If auto-enrolment can do the same over a working lifetime, that’s not a bad world for us to be finding ourselves in today.”

Yet, he says, there remains unfinished business. More people are working longer. Government data shows that in 2014 there were more than 1.13 million working above the age of 65 and this figure is believed to have increased. Yet there are many who will not be able to continue working until a later date.

“We haven’t made later working lives viable,” Sir Steve says. “There is no well-worn passage to 67 for people in certain jobs.” 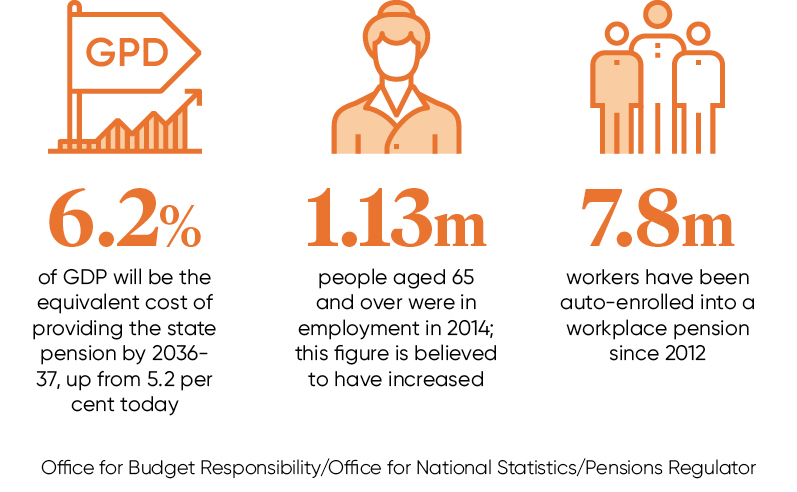 David Dodd, consulting director at Thomsons Online Benefits, says auto-enrolment is something of a “red herring”, as the current model is “pretty much dead” and something else is required.

“DC pensions are not enough for people to retire on and our research shows that 65 per cent of employees want something broader than pension savings alone in the workplace,” says Mr Dodd.

This approach, generally known as “financial wellness”, takes a more integrated or holistic view of reward and includes other tax-efficient savings vehicles such as corporate ISAs, but also services such as mortgage surgeries and debt counselling, to help people plan their futures.

This planning increasingly looks at long-term care in later life, says Mr Dodd, particularly for the “sandwich generation”. These are the group approaching middle age, who deal with the care needs of family members. Having seen how expensive care is, they don’t want to leave theirs to chance.