Pension provision in Australia surpasses current arrangements in the UK, so are there lessons to be learnt? 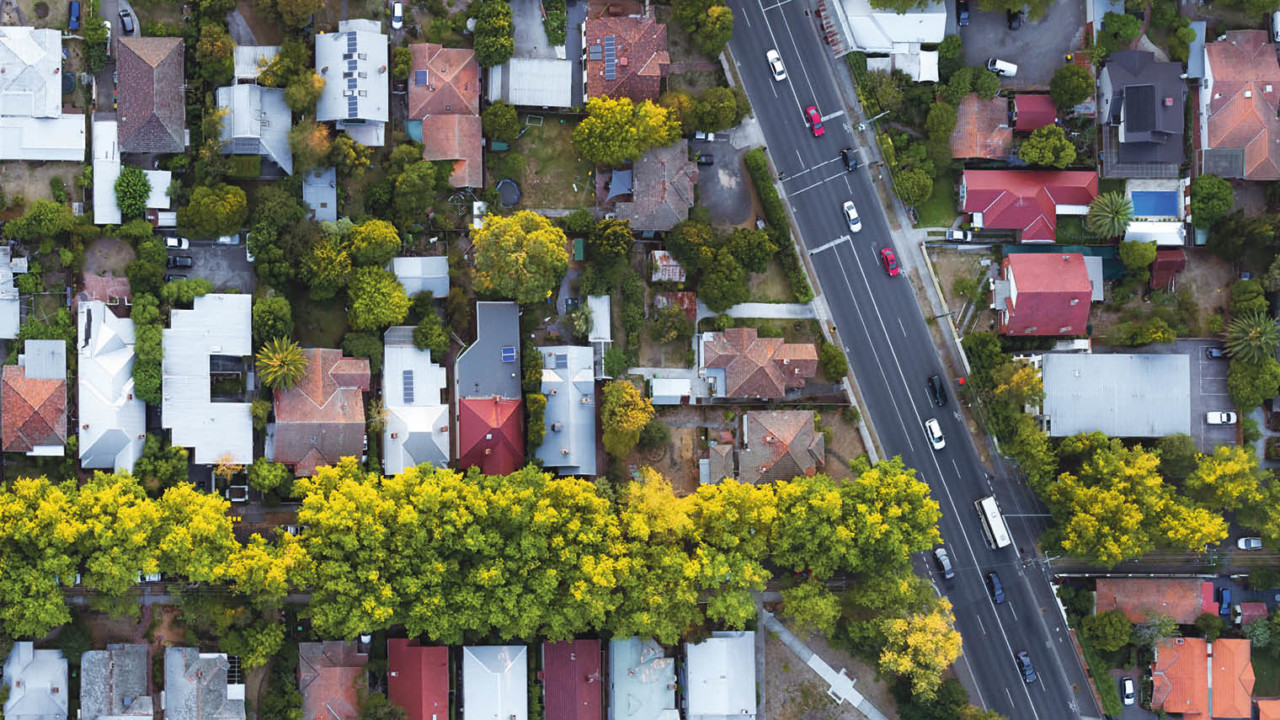 The UK’s final salary or defined benefit pension system was once the envy of the world. However, that “gold-plated” pension scheme, which will provide the backbone of retirement income for the baby-boomer generation, has had its day and the UK’s claim to a first-class retirement system is no more.

Britain now languishes 15th out of 30 in the Melbourne Mercer Global Pensions Index, a league table of developed nations’ pension systems, which for some years Denmark, the Netherlands and Australia have led in a class of their own.

Due to cultural similarities and the fact the pensions system was codified based on British law, comparisons are often drawn between the UK and Australia.

Just how useful these comparisons are is moot. “There are two measures to look at and they are contribution rates and coverage levels,” says David Harris, managing director at Tor Financial Consulting. “Everyone earning more than A$450 a month is captured by ‘super’ [superannuation] in Australia, while the low paid are excluded in the UK.”

Contribution rates have reached 9.5 per cent in Australia, though only paid by employers, with legislation passed to increase this to 12 per cent by 2025. 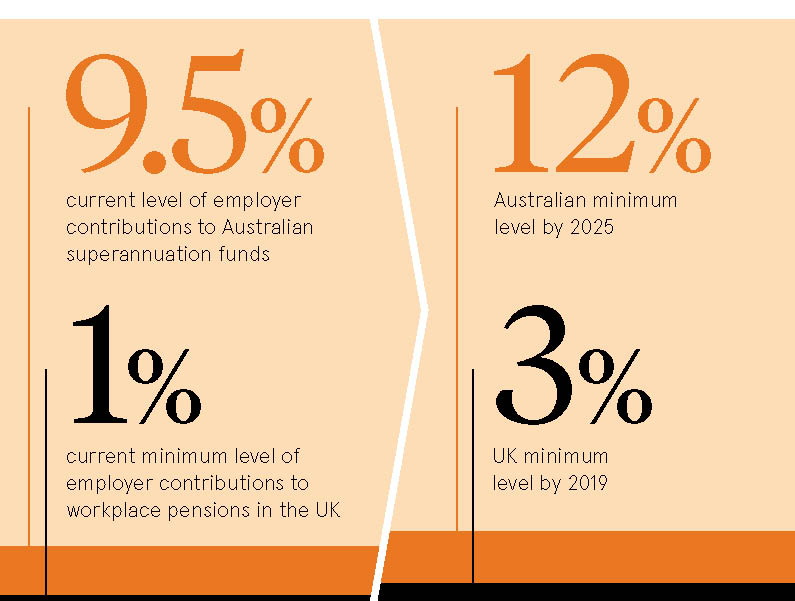 Although the UK’s auto-enrolment (AE) has greatly improved coverage with more than nine million enrolled as of January 2018, contribution rates remain minimal. The UK government is aware this will not provide a meaningful income in retirement and plans are in place to increase contributions from both employers and employees.

However, because the employee has to pay into the scheme and is not compelled to remain but can opt out periodically, Mr Harris believes the pace of increases will have a detrimental effect on the AE project.

“The promise of getting up to 8 per cent contributions in the UK has to be looked at in the context of what will happen afterwards to opt-out rates and perhaps, even, the economy as earnings are reduced,” he says. “Australia has done this over the past 25 years and so people have had a long time to get used to the idea.”

Australian super funds have done a good job at investing their members’ money. The sheer size of the market – Australian super now tops A$2.3 trillion – has enabled investment managers to innovate in areas such as infrastructure, which can generate attractive income streams over 20 or more years.

Many super funds now invest heavily in infrastructure, even in the UK, with Leeds Bradford and Manchester airports, Thames Water and Angel Trains partially or wholly owned by Australian pension fund money.

The reason it can do this is simply because of the scale of the Australian system, says Paul Leandro, a partner at Barnett Waddingham. “One characteristic of the Australian environment is size and very large-scale industry funds can effortlessly bring in huge amounts of assets through compulsory contributions,” says Mr Leandro.

It’s not all about size, but also a bit of luck as, unlike the rest of the world, Australia has not experienced a recession for 26 years, longer than super has been in place. This, says Mr Harris, has helped the system bed in and provided public confidence.

That confidence has influenced Australia’s greatest achievement which has been engagement. Super is largely understood and supported by savers, and with good reason, says Dianne Day, who worked on super in Australia and is now client director at Independent Trustee Services in the UK.

Australians understand that they must take personal responsibility for longevity risk, even in a country that is comparatively young

“They are motivated by a fundamental driver that as the population ages, the likelihood of them being able to draw a state pension and rely on public health services is reducing,” she says. “Australians understand that they must take personal responsibility for longevity risk, even in a country that is comparatively young.”

Longevity risk, or living longer than your money lasts, has been managed for generations in the UK with annuity products, which deliver guaranteed income until death. Australians receive their pensions via products, which keeps the money invested in markets with payments limited by how much growth the fund has experienced.

As longevity has extended lifetimes, the lack of a guarantee causes many Australians to fear living too long rather than dying too young. This has resulted in many becoming excessively cautious, reducing the amount they withdraw for income.

“The biggest mistake the Australian model made was to focus on getting people to save and put off what to do about delivering the retirement income,” concedes Mr Harris. But it isn’t Australia’s problem alone. What to do with pension savings in retirement is a problem experienced by all ageing populations.

The trouble is no system, with the possible exception of Chile with a simple structure and state-run clearing house for annuities, has succeeded in delivering predictable retirement income where defined contribution schemes are the dominant structure, says Gregg McClymont, retirement head at Aberdeen Standard Investments.

In recent years, the UK has moved away from annuity products, which were considered to offer poor value, to income drawdown. However, this leaves the individual bearing all the investment risk in later life unless they can secure a guaranteed income.

Guarantees are difficult to provide in the current environment of low interest rates relatively low inflation, says Mr McClymont, as they rely on government bonds, which are notionally risk free among developed nations, but quantitative easing has driven down their rates and so annuities have also been low. As a result, fewer consumers are buying annuities, unless they wish to secure a guaranteed income.

The Australian government has just formed a working group to tackle the concerns of longevity risk and develop a framework response focusing on making sure Australia’s superannuation system delivers more secure retirement income.

A member of this group is Jeremy Cooper, retirement income chairman at Challenger, the only annuity provider in the country, and author of the 2010 Cooper Review, which delivered a number of reforms to the Australian superannuation system. “People are building up pretty decent plans,” says Mr Cooper, “but is difficult then for them in a default environment to make choices about their income in retirement.”

One model being discussed is for a new collective approach to securing retirement income, which may require providers and super funds to enter into a risk-sharing arrangement with their members and customers.

Its early days, but without an annuity market in Australia to fall back on, the recommendations may be quite radical.

Though Australia faces the same problems in providing retirement income as every other developed nation, it has “grasped the nettle and done hard yards”, according to Mr Harris.

However, just as Australia celebrates 25 years of compulsory super, the rollout of the UK’s AE programme reaches its conclusion by covering all scales of employer. Most commentators see this as the perfect opportunity to push the project forward.

“The next step is to clarify the objective of the workplace and private pension system, and share that message with members,” Ms Day at Independent Trustee Services concludes. “Then we will have more motivated retirement savers.”