Mobile money puts the poor on road to prosperity

“The unbankables” may sound like a gawp-inducing television programme. It is, in fact, the name given to adults who do not have a bank account. There are two billion unbankables in the world, according to the most recent figures, published by Global Findex in 2015, and the vast majority of them live in developing countries.

Indeed, the database’s findings suggest that the Middle East and North Africa, where four out of every five grown-ups are without an account at a formal financial institution, are lowest in the rankings; Sub-Saharan Africa and South Asia are only a little higher.

Under closer inspection, in several individual countries the level of unbankables is as high as 95 per cent. There is no need for alarm about their supposed financial exclusion, however, for the mobile money revolution, which has gathered pace over the last decade, has prevented the alienation of poorer communities.

In a pleasing paradox, made possible thanks to fintech advancements, those millions of unbankables now have at the swipe of a finger on a smartphone a faster, safer, cheaper and more convenient way to send and receive cash when compared to most developed countries. They have been able to leapfrog top-tier economic nations, who are lumbered with financial legacy systems.

Digital payments have drastically reduced costs and, by recording transactions in previously informal, cash-based societies, they have spurred economic growth in areas that desperately need it. The payment landscape across the developing world has been reshaped because of mobile money and the traditional banking behemoths have been bypassed.

Dr Pinar Ozcan, associate professor of strategic management at Warwick Business School, has studied the emergence of mobile payments across the globe and concludes that the industry is thriving in spite, not because, of cross-sector commercial partnerships. “It is a perfect example of titans from different industries clashing over how to deliver a new concept, rather than working together,” she says.

“For mobile payments to work, the banking giants and network operators needed one another. Their inability to agree caused the commercialisation of mobile payments to be stalled in developed countries for 15 years. In developing countries, where few people have bank accounts but many possess smartphones, that interdependence was not required and mobile operators have led the way.”

One of the biggest success stories is mobile phone-based financial service M-Pesa, launched ten years ago by Vodafone for Safaricom, the largest network operator in Kenya (pesa means money in Swahili). Suddenly, for a small fee, members could transfer money between mobile phones without a bank account. It was a game-changer in the developing world and hugely popular. In less than two years, M-Pesa had attracted 6.5 million Kenyan subscribers and by year five that number had swollen to 17 million. 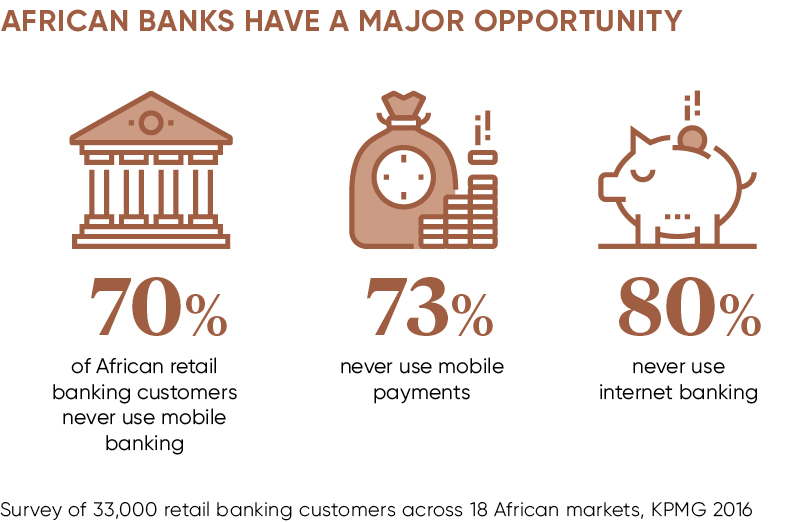 The mass-scale adoption of M-Pesa spawned a multitude of unforeseen benefits. Digitalising money transfers reduced crime in previously cash-based societies, for instance, and in 2014, largely because of mobile money activities, which were previously in the informal cash-based sector, Kenya revised its GDP upwards by 25 per cent.

Little wonder M-Pesa has extended its network to include Afghanistan, South Africa, India, and more recently in Romania and Albania, but there is still plenty of room for innovation and potential for mobile money growth, in both the developed and developing worlds.

“Mobile money has enabled an ecosystem of immediacy, relevance, and accessibility in payments and financial services across Africa,” says Rachel Balsham, co-chief executive at MFS Africa. “But the African markets are highly fragmented; there are 54 countries, with up to four mobile operators in each one. Interacting with mobile wallets across networks and countries can require dozens of complex and time-consuming integration projects. The next step is cross-border interoperability.”

This is where MFS Africa is shining as one of the most innovative companies in Africa as it has 170 million mobile wallets connected to its network, though there are other examples. London-headquartered online remittance service Azimo (derived from the Swahili word for help) can “transfer money to over 190 countries at the click of a button”, says chief executive Michael Kent. “Because we only work online, our transfers are up to 90 per cent cheaper than traditional providers and around 20 times faster, so we save people huge amounts of money and time.”

In India, too, mobile money is revolutionising the way people live and boosting the economy, but it is a work in progress. On November 8 last year the government, concerned that 40 per cent of its 1.3 billion population is unbanked, took action by demonetising 86 per cent of the country’s total currency.

The move, partly designed to crack down on the use of illicit and counterfeit cash to fund illegal activity and terrorism, has been vindicated. Exactly a month after the demonetisation was announced, daily e-wallet transactions had shot up from 700,000 to 6.3 million and the RuPay card business had expanded by 316 per cent.

“Given that by the end of this decade, 63 per cent of people in developing countries are predicted to have access to smartphones, it’s a compelling business opportunity for banks and an area that demands attention to ensure a better financial future for people in these markets,” says Simon Paris, deputy chief executive of fintech leaders Finastra, whose organisation is working with the World Trade Board to determine how to help extend financial inclusion through innovation.

“There are some great use-cases for mobile payments now where governments are marrying mobile infrastructure with the pains of the unbanked, disconnected or most in need. This includes helping pregnant women in remote areas to access state subsidies digitally to reduce the risk of infant mortality and reducing the time it takes for social security payments to arrive for farmers in remote villages.”

Michael Tomlins, chief executive of Infomedia, points to the huge growth of mobile payment ecosystems in Japan and China, and the rise of WeChat, Alipay and direct carrier billing (DCB).

“In China, mobile payments are now worth $5.5 trillion, roughly 50 times the size of mobile payment market in the US,” he says. “In Japan, DCB – charging digital and physical purchases direct to a consumer’s phone bill – now accounts for 50 per cent of all online purchases. These innovations in China and Japan show that mobile-first payments are the future for countries without a legacy card infrastructure.”

Mr Kent of Azimo adds: “By 2030 nearly all the two billion people who don’t have a bank account today will be storing money and making payments with their phones. As they become financially ‘on grid’ they can spend, save and do things that most of us take for granted.

“As other products get built on mobile money platforms – think insurance, credit, saving and wealth management – users in developing countries will be put back in control. They will be able to improve the management of their financial resources, and ultimately their lives and those of their families.”

Perhaps “The unbankables” would make a decent TV programme, after all?