The problem of late payment is as old as invoices. Ever since the first time a trader handed a supplier a credit note instead of cash in return for goods or services, people have been chasing each other, sometimes literally, to get debts paid.

Over the years the system has formalised. Today if you request payment from a business customer at the point of exchange they will tell you to get out of their office. Agree terms – 30 or 60 days, say – but insist they are always met and you’ll be labelled a nag.

Sadly for suppliers late payment isn’t frowned upon in the corporate world; in fact, for many businesses it’s integral to their financial planning. As a result, suppliers everywhere are routinely left waiting anxiously for money to arrive.

Their terms might specify 30 days, but they know it could be 60, 90, 120 or even longer. In reality, there is very little they can do about it. The power is with the client; make them angry and they’ll dump you for someone else.

The law is just as toothless in this area. Notionally, suppliers can fine late payers and charge them percentage interest as debts drag on. But almost no one has the guts to enforce the rules, the rational being that late-paying customers are better than no customers at all.

Yet while business owners have to wait for what is rightfully theirs, many of their own costs are payable up front or in arbitrarily short timeframes. Fail to meet payroll every month and your business is insolvent. Utilities are turned off if you don’t pay bills and the taxman is not famed for his flexibility.

In short, maintaining cash flow is a top-three headache for almost all businesses. Historically, firms have had a few options to ease the pain. They could invoice on time and send friendly reminders for prompt payment, they could energetically pursue buyers with good track records or they could accept their predicament and use an invoice finance service.

Invoice finance companies buy your invoices subject to checks, releasing cash to you quickly and charging a fee in return. The practice is relatively common, but some customers complain the charges are high and you have to sign over your debtor book lock, stock and barrel for an agreed period, usually 12 months.

Good payers are lumped in with bad ones and you get charged regardless, so unless you only work with bad ones, you’ll pay over the odds for the service.

But in the last few years a new option has emerged, made possible by the rise of peer-to-peer services and pioneered by companies in Britain. It’s called invoice trading and allows everyday investors to bid to buy invoices in an auction.

The crowd element of the service drives up competition for invoices, thereby driving down the cost to invoice owners. Once registered, businesses can select the bills they want to finance on a piecemeal basis, submitting only those they know won’t be settled any time soon.

One of the first businesses to offer this new service is MarketInvoice, launched in the UK in 2011. Its co-founder Anil Stocker says the process is simpler and cheaper than traditional invoice finance, which is a major draw for time-pressed small businesses.

Investors on the platform can bid to acquire up to 90 per cent of each invoice. Investors get an interest payment and MarketInvoice gets a fee, typically amounting to 2-3 per cent of the invoice value. 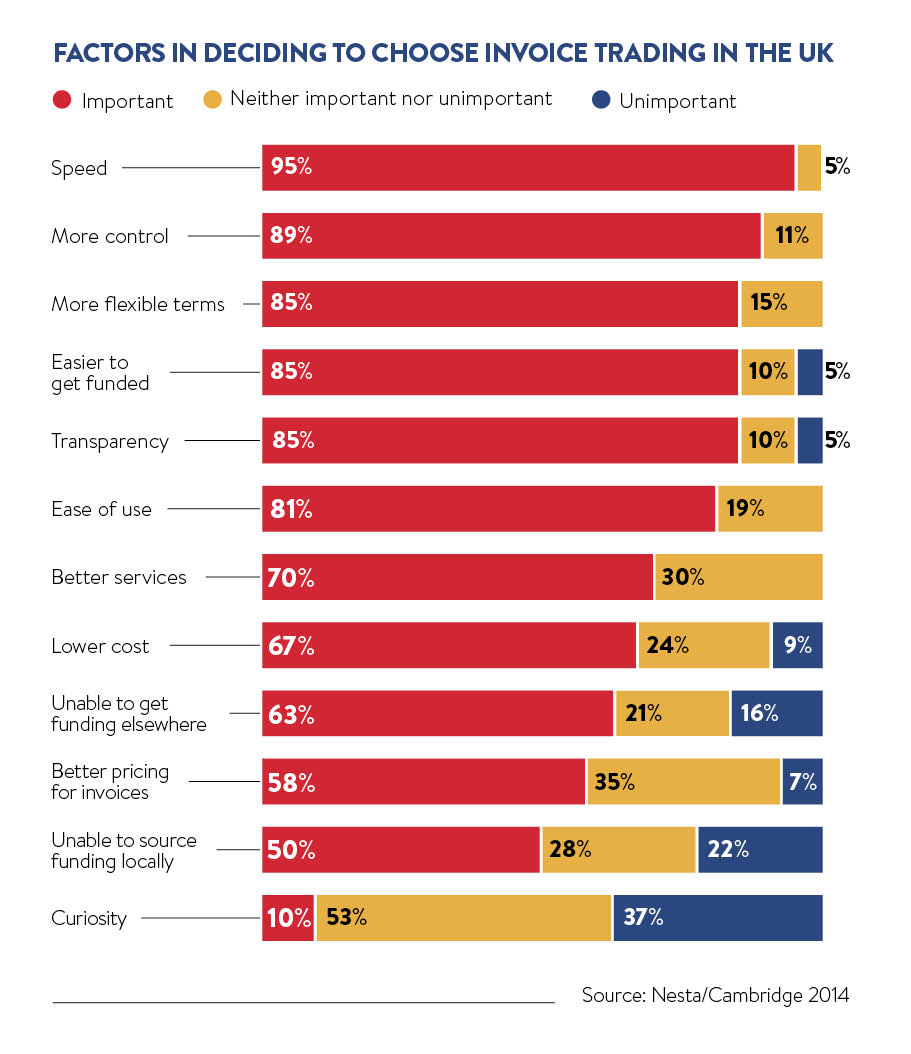 “Cash flow, or lack of it, is one of the major hindering factors of business growth,” says Mr Stocker. “Even great businesses, with excellent products and a full order book can come unstuck because of cash-flow problems.

More invoice trading services have sprouted across Britain to cater for growing demand. Businesses appreciate the simplicity of the platforms – they can usually sign up within hours if not minutes – and the flexibility to dip in and out when needed.

“Invoice trading has the potential to eradicate late-payment terms by simply making the timeframe of an invoice irrelevant,” she says. “It will help strengthen businesses across the country, which will ultimately aid the economy and make Britain stronger.”

There are, however, one or two significant catches. A big one is that the arrangement is contingent on clients paying within agreed parameters of lateness, if at all. If the deal stipulates 90 days and the client fails to settle in that timeframe, then the supplier becomes liable for the debt.

The money advanced to you at the start of the deal is called in and you’re back to square one or worse you have spent the money and have no means to settle. Paul Haydock, chief executive of invoice finance business DueCourse, points to another problem that companies can become over-reliant on the finance and start to struggle without it.

But, as Mr Haydock says, these risks are more than made up for by the benefits. “Banks aren’t lending to growing businesses like they used to and it takes on average 72 days for invoices to be paid. About half of all UK invoices are currently overdue, so the situation is pressing,” he says.

Sharon Argov, chief executive of Fundbird, says: “Invoice finance is attractive to investors as it usually offers a high return and it is attractive to small businesses looking for finance because they can have the cash in their account so quickly at a more competitive rate than the traditional payers are offering.

“Technology has spurred this revolution in finance and I don’t see it slowing down, only developing and becoming more sophisticated. The next generation of business owners might even bypass traditional financial services altogether.”

But one glaring issue with invoice trading remains, as it does with any form of invoice-based finance, and it’s this: relieving the pain of late payment doesn’t solve the problem. In fact, it could make a lasting solution less likely. Detractors argue it excuses late payers and kicks the issue into the long grass.

Small businesses everywhere will be asking, “Why should I have to pay to have my invoices settled?” And they would have a point. Indeed, from the moment an invoice is submitted under agreed terms, the money is no longer the client’s but the supplier’s. Why should they be penalised for receiving their own money in a timely fashion?

It’s a situation that leaves a bitter taste in the mouth of Martin Campbell, managing director of Ormsby Street, who runs a credit checking tool for small businesses called CreditHQ. “Invoice trading is needed because many companies just aren’t honest about when they pay their invoices. But invoice trading in reality only addresses the symptom, not the cause of late invoice payment and poor cash flow,” he says.

“It’s unfair the cost of invoice financing generally falls on the supplier and it doesn’t seem right that a small business should have to spend their precious time and resources seeking credit for invoices which often should have been paid months previously.”

Mr Campbell points to some slow progress in the war against late payments. The government has started naming and shaming the worst offenders, and from April any employer with more than 250 people will have to disclose payment terms as well as their real payment performance in terms of lateness and fines owed.

“In itself this probably won’t have much tangible impact on whether businesses pay their invoices on time or not,” he adds. “But it does mean that late invoice payment is higher up the business agenda and will hopefully encourage small businesses to use the tools available to protect themselves.”

Late payment and the potentially terminal cash-flow problems it causes is the scourge of suppliers. Invoice trading is one of the more potent weapons in the small-business armoury, capable as it is of eradicating its worst symptoms.

But it is an anaesthetic not an antidote. Like a child with a grazed knee, small businesses will be glad to have the option of the sticking plaster, but they would rather avoid the pain altogether. 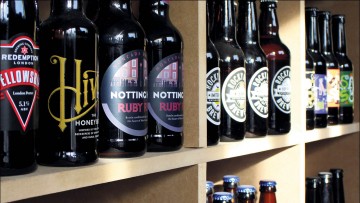 Ales by Mail takes the best craft beers and ale, and delivers them straight to your door. Founder Paul Kruzycki started the business six years ago with just £800 investment. That bought him a website, space in a warehouse and 48 bottles of beer. Now, Ales by Mail is a marketplace vendor for Amazon and provides more than 500 product lines to the retail giant.

Mr Kruzycki was referred to MarketInvoice when the offer from Amazon first came through. It was a good opportunity for business, but he nearly had to turn it down. “It represented a massive potential uplift in our turnover, but when the dust settled, we realised it was going to be a tough one,” he says.

Amazon’s payment terms were much longer than the 30 days Mr Kruzycki had agreed with his brewery suppliers. So despite an undeniably valuable deal, it had the potential to punch a gaping hole in his business’ cash flow.

In order to maintain a steady trajectory of growth, he approached MarketInvoice to advance Ales by Mail’s outstanding invoices. By financing their incoming payment, Mr Kruzycki and his business were able to bridge the funding gap left by Amazon’s payment terms. “It’s allowed us to release funds tied up in long payment periods. Now we purchase more stock and explore new markets,” he says.

After using MarketInvoice last year, Ales by Mail’s growth was up 65 per cent in 2015 compared with the previous 12 months. “MarketInvoice was just very quick and efficient, and I’d recommend it to anyone,” Mr Kruzycki concludes.