Five years ago, Transport for London had yet to launch contactless card payments and the old-fashioned cheque was heading for the dustbin.

Many were predicting a rapid and sweeping transformation of the payments industry through mobile phones. But forecasts about the speed of change proved optimistic, while assumptions about which companies would drive the future were also wide of the mark.

Looking back at predictions made in 2011 about what lay ahead for the payments industry shows that the future never runs as smoothly as you might expect. In mid-2011, cheques earmarked for the axe were given a reprieve and will be around “for as long as customers need them”, according to the UK Payments Council.

But there would be no speedy introduction of mobile payments as predicted, nor was cash facing global decline as some thought. In 2011, the mobile network operators were confident they would dominate mobile payment, but their initiatives met with failure.

Banks and credit card companies have seen steady progress with contactless card payments, yet they are facing stiff future competition from Silicon Valley and mobile handset giants. Today it looks as though Apple, Google, Samsung and PayPal could sideline other players in the e-commerce and mobile payments markets.

While society has been transformed by digital technology and mobile phones, the payment industry has struggled to keep up with the pace of change. Back in 2011, there were already millions of cards bearing the contactless vector logo, but the tap-and-pay technology hadn’t yet become mainstream.

Predictions that contactless payment would grow steadily over the coming years proved correct as one in ten card transactions are now contactless. The adoption of the quick and convenient payment method was boosted by London 2012 Olympics – the contactless games – and full introduction of swipe card payments by Transport for London (TfL). 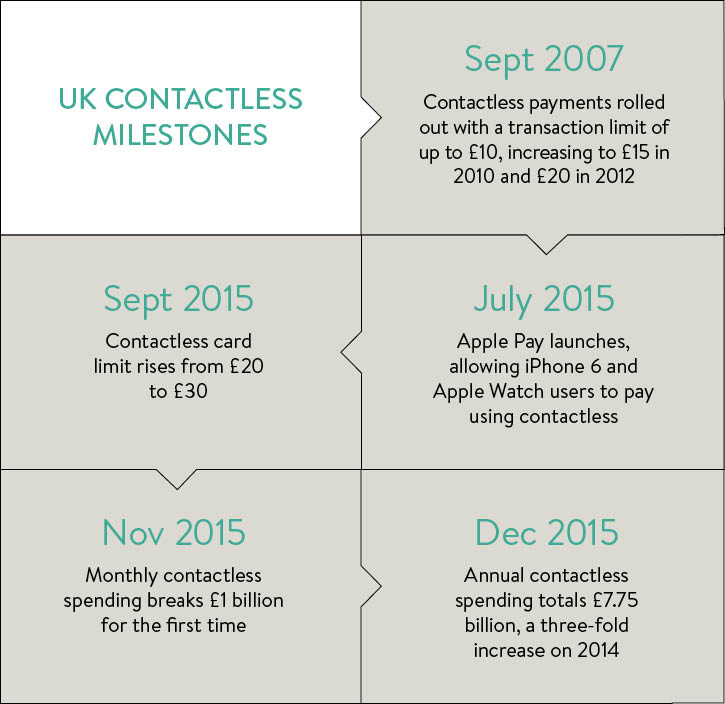 TfL introduced contactless card payments on buses in 2012, rolling the system out to tube stations in 2014. Shashi Verma, TfL head of customer experience, says: “Contactless has been slower to take off than we would have wanted, but it has not been too far away from predictions.”

Contactless payment was first introduced in the UK in 2006, but the following financial crisis interrupted its development as banks cut investment in technology.

Mr Verma believes an area where industry predictions have been proved wrong was mobile payments. Paying by mobile currently makes up less than 4 per cent of contactless transactions on TfL, he says.

The most effective technology to enable this is near-field communication (NFC), which allows mobiles to communicate with a card reader within 20cm. The take-up of mobile NFC for contactless payments has been a long time coming. It wasn’t until Apple launched the iPhone 6, enabled with NFC, in autumn 2014, along with the introduction of Apple Pay, that NFC become more common. Apple Pay finally arrived in the UK in July 2015, though has yet to achieve wide usage.

Initially, NFC was developed by handset manufacturers such as Nokia. Then the mobile network operators decided they would take charge of the development of the technology. Their various attempts to implement NFC and enable mobile payments have come to little.

As Mr Verma says: “Sadly, they did nothing apart from messing up the entire solution, which slowed NFC for a long time. It is only more recently that Apple and Samsung have picked up the pace so the industry is finally beginning to take shape. But compared to the original predictions, it is years and years behind.

“Once upon a time, the telecom operators used to be the most interesting and innovative companies around – I think they have lost that mantle completely.”

One of the first launches by a mobile operator was Orange and Barclaycard’s Quick Tap in 2011, which could be used in the likes of Pret A Manger, Eat and McDonald’s. It was axed in 2014. Likewise, some digital wallets, such as O2 Wallet and Visa’s v.me, have also been closed. The road to the future of payments is strewn with the skeletons of failed systems.

For Mike Cowen, head of digital payment products for MasterCard UK, the introduction of contactless has been a steep learning curve.

“It has been a slow burn here in the UK. In other markets it moved much more rapidly. The trend has been that the markets which launched earliest were the slowest to grow. The UK was probably one of those, second to launch after the US. We took some of the pain here of learning the lessons,” he says.

When MasterCard launched contactless in the UK, it focused the launch on the London area. But this proved ineffective, so other trials have used national retail brands such as leading supermarkets and fast-food chains.

But Mr Cowen says that in the Czech Republic, for example, which introduced the technology later, contactless is more than 50 per cent of the market, while Poland is another big country for contactless.

However, Dave Birch, innovation director at payments technology consultancy Consult Hyperion, says his 2011 predictions about the gradual take-up of contactless were broadly accurate. And he correctly called the growth of faster payments, where money is transferred instantly between online bank accounts as these have rocketed. But he says an area where he overestimated was the potential for making internet payments much simpler.

“I thought internet payments would improve quicker than they have done. A lot of the time you are still typing in your bank account, credit card number and password, plus expiry date and name,” he says.

“We need to move away from typing in credit card numbers because the security problems there are just massive as the continuous breaches have shown.”

Mr Birch believes many predictions of the past few years have come unstuck because they assumed there would be greater co-operation between banks, credit card companies, mobile operators and the government. It was assumed they would all work together to improve digital security.

“Actually that co-ordination hasn’t really happened in the intervening period. Internet fraud of all kinds, not just payments, has just got worse and worse,” he says.

Yet fraud in contactless payments is still very low, as little as one penny in £100, according to TfL’s Mr Verma.

Mr Birch adds that Apple’s eventual adoption of NFC on the iPhone 6, which has ushered in Apple Pay and begun opening up mobile payments, should be welcomed.

“Apple was a sheep dog, not a wolf. Apple didn’t come along to take away all the credit card companies’ business or all the banks’ business, it came along as a sort of sheep dog that got them organised and actually made things happen,” he says. 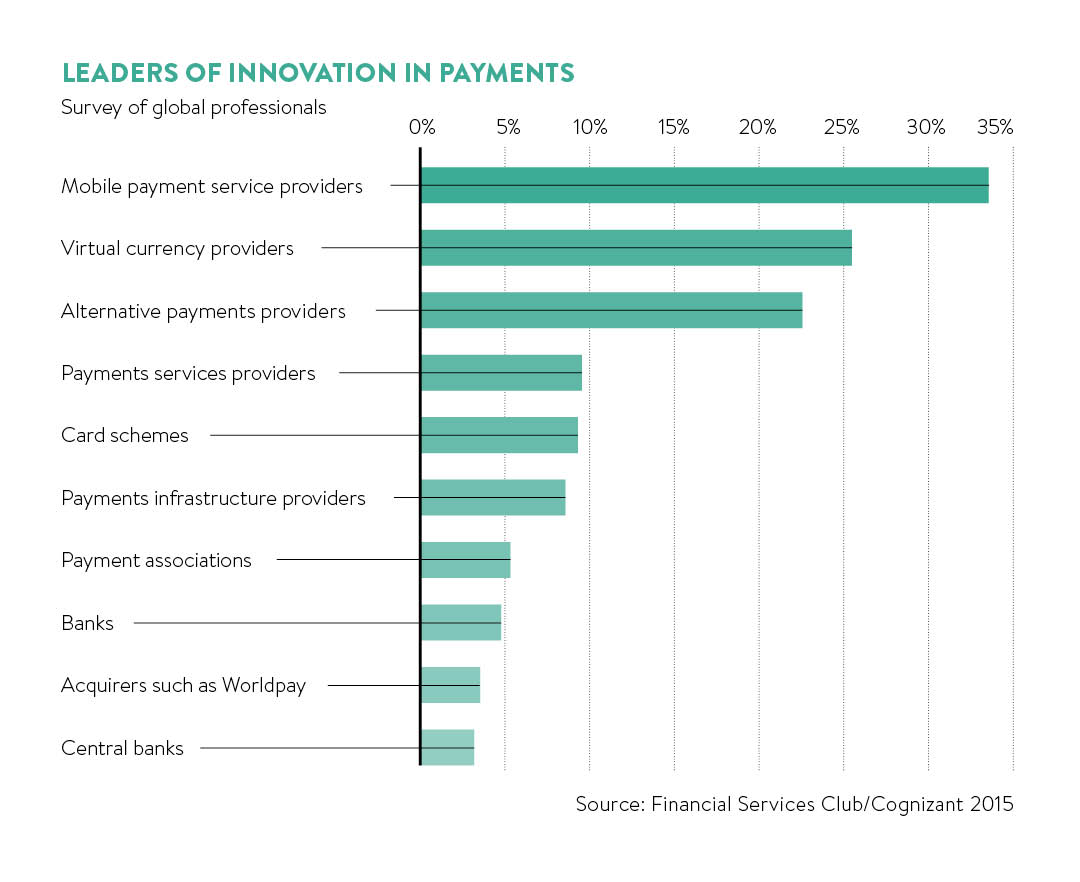 For the future, he predicts that payments will eventually become embedded in mobile apps such as Apple Pay and all payment will become mobile.

An area where some may have overestimated the pace of change is the disappearance of cash as more people shop online. But as Kevin Dallas, chief product officer for global e-commerce at Worldpay, says: “What we missed was the role of emerging economies and cash as a measure of security in markets that don’t have the same history of trust with merchants.”

In emerging markets, such as India, e-commerce transactions are often paid for by cash on delivery rather than via online payments as many people still do not trust putting their bank details online. So cash is still huge in many parts of the world.

Mr Dallas foresees huge transformations in payments with the arrival of the internet of things, where devices have sensors and are connected to the internet. A much heralded example is the self-stocking fridge which orders replacement food as stocks run low. This could lead to a world of instant payment with minimal input from the account holder.

But he warns that as spending cash grows ever easier, this raises big ethical questions. Consumers may find themselves making purchases without realising and running up bills. He says 85 per cent of consumers are worried about how much they might spend when there are no barriers to purchasing.

A big barrier to overcome before this free-spending society comes of age is in authentication and identification. Having to touch fingerprint identification on phones when paying slows down contactless mobile payment, making contactless cards quicker and more appealing than mobile.

For authentication, biometrics will be important, but as TfL’s Mr Verma says, London Underground needs to usher people through terminals every second; there is not time for each commuter to stop and have their identity confirmed with biometrics.

A range of interesting biometric solutions are being developed, such as voice recognition, and MasterCard is introducing the so-called selfie-pay option, where cardholders can use an image of their face for identification, opening up an app on their mobile phone and scanning their face, blinking to ensure they are real people rather than a static image.

Kevin Jenkins, managing director of Visa UK and Ireland, says over the coming year there will be more ways to pay through a greater number of devices, with wearable payments like bPay, which can be a wristband, key fob or sticker put on any object. Then there is Apple Watch and Visa’s collaboration with Swatch

He predicts that in five years’ time, more than half of Visa transactions will happen on a smartphone or tablet rather than via cards. “We can expect these devices to be joined by more wearables and, as the internet of things develops, cars.”

It will be fascinating to see how the next five years pans out for the payments industry. It seems likely that some of the predictions will be broadly accurate, but others will be way off target. 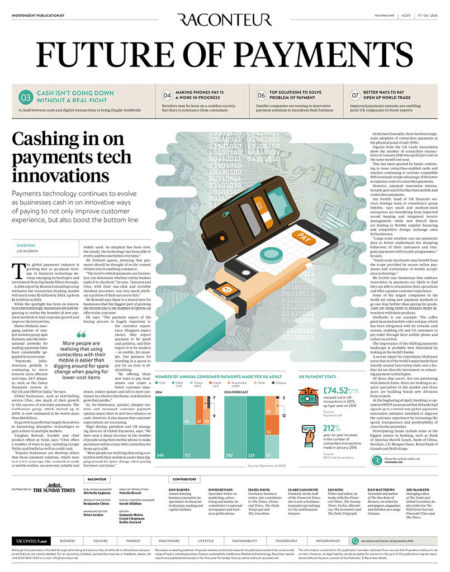