Digitally-savvy startups have changed everything from the way people travel to how they order their takeaways. But until recently the financial industry seemed somewhat untouched by the waves of disruption crashing down on other industries.

Strict regulations stopped would-be entrepreneurs from entering the market and many of the big banks seemed content simply to shift their basic services online in a kind of “will this do?” approach to being a digital bank. Then, suddenly, everything changed.

We have the expertise and experience in navigating challenges, and in answering the hard questions

Governments and regulators actively began to encourage the growth of the fledgeling fintech industry, and a number of digital-only challenger banks emerged. The likes of Monzo, Starling Bank and N26 offer customers slick apps and speedy service. They aren’t held back by the complex legacy IT systems most big banks have to wrestle with to rollout new digital products.

And they’re particularly attractive to the kind of young, millennial customers that represent the future of the banking industry.

However, despite initial predictions that challenger banks would usher in the kind of disruption that’s fundamentally changed, say, the music and retail industries, the picture is more nuanced.

“The term disruption has been used a lot,” says Michal Panowicz, senior global digital transformation expert for the Boston Consulting Group and former mBank executive. “But in some ways the disruption hasn’t arrived, even to the extent that many boards of large banks have become desensitised to the topic.”

Although slick apps and personalised spending alerts are appealing to many, the big banks have largely retained their vast customer bases. That’s partly down to people’s wariness about entrusting their primary account to these startups, as well as the limited range of products on offer.

In other words, traditional banks still have a chance to capture the market that challenger banks seek, but they’ll need to move beyond simply offering old-style banking services on new digital channels.

“We’re seeing people with quite large aspirations spending billions of pounds and not really achieving anything,” says David Brear, chief executive and co-founder of fintech consultancy 11:FS, which has the motto “Digital banking is only 1 per cent finished”.

Should traditional players create their own challenger banks? 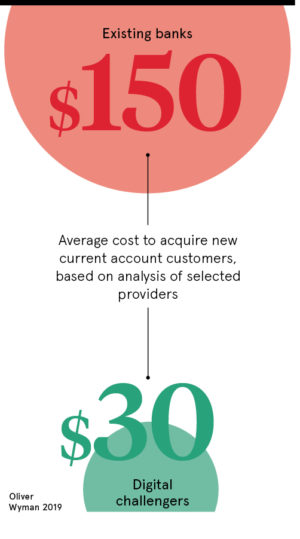 Indeed, few would argue that banks need to speed up their efforts dramatically to become truly digital. But Mr Brear says the problem is often more cultural than technological. “In any organisation we’ve been too, there are groups of highly motivated, smart people who know what to do,” he says. “But it’s about unleashing and unlocking that potential.”

At any rate, simply pouring millions into innovation hubs and piecemeal digitisation strategies isn’t going to deliver the kind of results that will win over those tempted by the challengers’ offerings or indeed the financial services big tech firms such as Apple, Google and Facebook increasingly offer. Yet upgrading convoluted core banking systems designed for a branch-based world can take years and cost billions.

One way around this is to create your own challenger bank, something that as many as one third of retail banks are looking to do, according to recent research by the Economist Intelligence Unit on behalf of Temenos.

“If you really want to move forward quickly, basically the only option is to set up your own challenger bank,” says Peter-Jan van de Venn, managing director of business development at Five Degrees, a Dutch fintech specialising in digital core banking software. “I’ve seen that happening among our own clients and it’s proven to be quite a successful approach.”

These challenger banks effectively keep customers in-house and can be established in as little as 12 to 18 months. NatWest, for instance, recently launched Mettle, an app-only bank which offers small and medium-sized enterprises combined current account, invoicing, payment chasing and bookkeeping capabilities. Its Esme Loans lending platform, meanwhile, provides business customers with a paperless loan application process that takes less than ten minutes, with funds often received within the hour.

As well as offering faster services, NatWest also aims to provide customers with seamless interactions across different channels. In the future, artificial intelligence and machine-learning could even drive highly personalised and timely product offerings based, for example, on a customer’s location or spending habits.

“We’re reimagining what it is our customers actually want, as well as how those services are going to be provided,” says Kevin Hanley, director of innovation at NatWest.

Banks that don’t want to go down the challenger route can still enhance their approach to digital by embracing open banking through APIs (application programming interfaces), software which allows fintech firms to build tools and apps on top of the bank’s core technology infrastructure. This effectively repositions the bank as more of a technology platform for services offered by third parties.

“The successful organisations in future will be those that are able to combine their assets and services with the assets and services of others, and do new and unique and insightful things that are valued and trusted by customers,” says Mr Hanley. “And that’s a fundamentally different kind of banking landscape to the one that has existed for the last three, four or even five hundred years.” 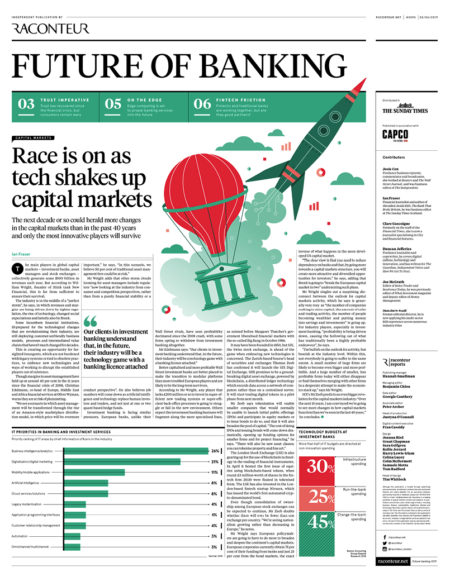