The prospect of a run on a bank in the modern era was unthinkable, until September 2007. As we move towards a cashless society, could it happen again? 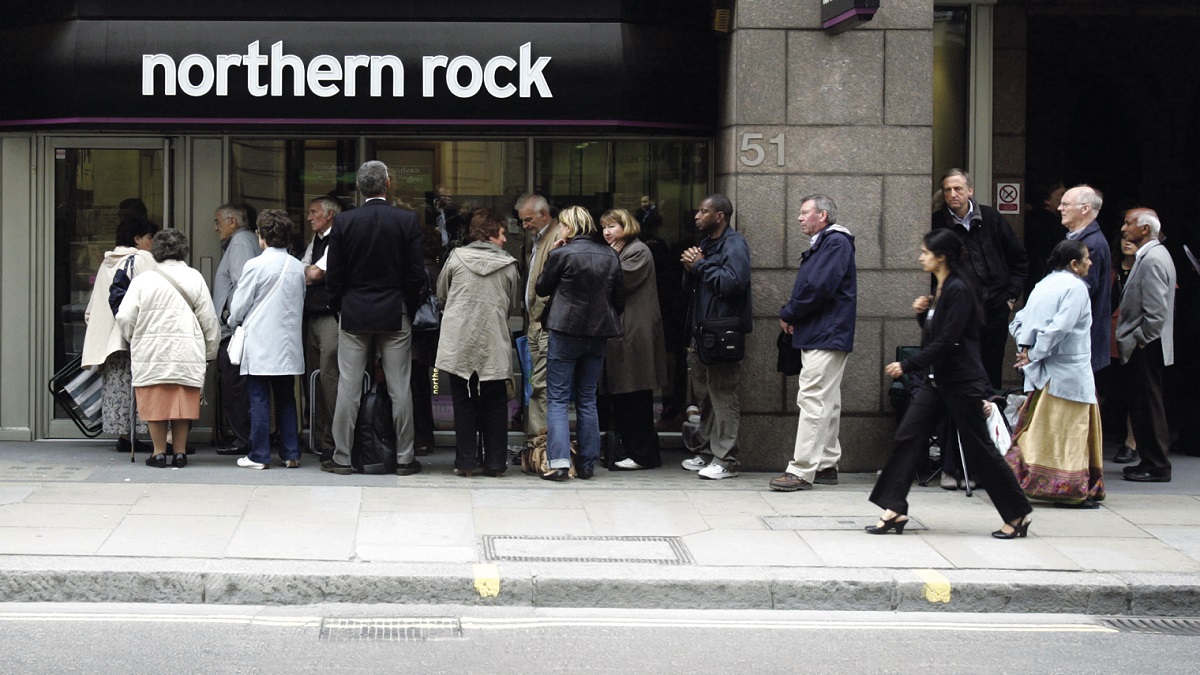 A little over 12 years ago, Northern Rock fell victim to the UK’s first bank run in living memory.

Scores of people queued outside branches to withdraw their money after the lender confirmed it had turned to the Bank of England for support, having been unable to repay loans it had taken out on the money markets.

Worried customers panicked and surrounded cash machines across the country. Branches were mobbed as ATMs churned out cash. Widespread panic was reinforced by 24-hour rolling news coverage on TV, in newspapers and online.

More than a decade on, with the very real prospect of a cashless society and a world where people no longer carry physical notes and coins, central banks, regulators and governments face some tricky questions.

Potentially, cash can now be transferred from accounts in greater amounts, more quickly than before and, even if banks enforce temporary limits on online withdrawals, what effect would the resulting panic have on the banking system as a whole?

“In a world without physical cash, the rules of engagement for situations such as a bank run will require a different framework,” says Simon Fairbairn, director of solution development, western Europe, for Ingenico Group. “The rules and systems of today will need to evolve to accommodate the demands of a run.”

Mr Fairbairn questions whether present digital banking infrastructure is sufficient to cope with sustained pressure of this nature. “Regulation, compliance, technology; processes have all evolved to try and prevent the sins of the past, but until tested, can we really be sure it won’t already be found wanting,” he says.

It may sound like scaremongering, but Mr Fairbairn’s cautious view has broad support from many in the financial services community.

“A digital bank run in a hypothetical future would be much more dangerous as it would happen in seconds and minutes when clients could simply use mobile banking apps to transfer money to another account,” says Susanne Chishti, chief executive of Fintech Circle.

“Such a digital bank run would be much more difficult to contain and an appropriate technical response for such a scenario would have to be coded in at the outset to offer any chance of being effective.”

Banks must be aware of digital dangers

Of course, banks’ internal liquidity monitoring processes should already have alerts in place that trigger warnings and are able to react to stop any such run, which would threaten the organisation’s financial stability.

However, regardless of whether a bank is physical or digital, if customers all try to withdraw their deposits simultaneously, the bank will not be able to provide all the cash.

David Luck, chief executive of Capital on Tap, explains: “It won’t remove the possibility of a run on the banks since digital banks, just like physical ones, only keep a fraction of their customers’ deposits in cash.”

Although advances in digital banking over the past 12 years mean fewer people would these days queue for their money outside high street branches, consumers and businesses are now far more connected through social media and technology. Rumours and panic can spread in new and different ways, and potentially quicker than before.

Proliferation of fintechs, digital challenger banks and digital currency providers that now hold assets globally also raises questions about whether risks to the financial system are more broadly spread than they were in simpler times, when competition in the banking sector was more concentrated.

“We need to step up the risk management that we apply,” he says. “Traditional financial services companies will need to play a large role in that. There is a role for the government and regulators to play in monitoring this space and saying that financial stability is the stability of the system as a whole.”

Mr Daskalov says the industry needs to be careful about how the future digital asset regulatory landscape is crafted, warning that policymakers could store up problems for the future if they do not take action now.

“Many of the financial regulations that existed in the traditional financial system make sense also in the digital assets space. Those regulations can be reapplied. Let’s take some of the lessons we learnt in the last century and reapply them so that they make sense to this new digital asset space,” he says.

However, the risk doesn’t lie purely with new market entrants, according to Suresh Vaghjiani, chief executive and vice president of Tribe Payments, although he warns that outdated technology may ultimately be the undoing of legacy banks.

“Traditional banks need to have the ability to handle bank runs from a technical perspective rather than a cash reserves perspective,” he says.

“Legacy technology is still largely used in many traditional banks, whereas in challenger banks modular and disposable technology is in high use. This allows the challengers to constantly update their infrastructure and improve the customer experience.

“The outdated IT and technological infrastructure could very well end up being the Achilles’ heel for legacy banks.”

Who are the likely survivors?

Given the conflicting views, experts cannot agree on which types of organisation would survive the next wave of banking turmoil.

While some think new market entrants have better infrastructure to respond to a run more quickly, others say their youth could count against them when customers consider who they trust.

“Bank runs are caused by a lack of trust in the institution holding funds,” says Josh Gosliner, vice president of global market strategy at Juvo. “If bank runs become commonplace on digital banks or in cashless economies, smaller, newer digital banks, which have accumulated less trust, would likely lose out to traditional banks that have survived bank runs in the past.”