For five years between 1996 and 2001, Hollywood actor Robert Downey Jr struggled with substance abuse, was in and out of prison, spent time in rehab, was sacked from Ally McBeal and denied a lead role in a hit Woody Allen movie as a result of being uninsurable.

With such evidence that leopards can, indeed, change their spots, is the UK’s banking sector undergoing its own, similar, transformation? 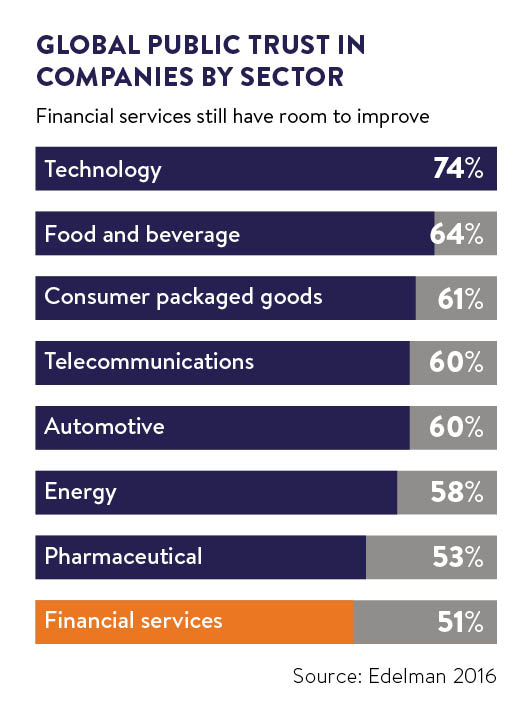 Tainted by repeated regulatory failings, mis-selling scandals, and climaxing with the global financial crisis yet rewarded by a perceived hefty bonus culture, corporate golf days and excessive expense accounts, something had to give.

So while Downey Jr may have had his hand forced by a prison spell, rehab and an ultimatum by his wife, banking and capital markets players have also been coerced into a turnaround.

“The troubles that the industry has had over the last eight to ten years have made everyone more humble. Bankers are no longer ‘masters of the universe’,” says Andy Maguire, group chief operating officer at HSBC.

Post-2008 we have seen the introduction across Europe of tighter controls on bonuses, an independent commission established to divide institutions’ retail and investment banking units, a splitting of the financial regulator, and higher protection thresholds by the Financial Services Compensation Scheme.

Yet has cleaning up the industry’s “bad boy” image come at the cost of innovation?

Changes to regulation pertaining to liquidity and minimum capital adequacy requirements may have played a part.

Last year Reuters reported that the top 20 global banks alone had coughed up roughly $235 billion (£186 billion) in fines since the crisis. As banks have settled such fines, or had to set aside cash just in case, or restructured their businesses towards more transparent business lines, perhaps financing new initiatives and technology applications has taken a back seat.

By their very nature, arguably banks are ill placed to lead culture and innovation. As Mr Maguire points out: “Without making excuses, we can only really get our hands on two sorts of data – customer data and financial transactions, both of which come at a very high premium around security and privacy.

“In capital markets you have trading activity that is going on 24/7, 365 days a year, so when people ask why we can’t be more like Uber, it’s because there are legitimate structural differences between the nature of our businesses.”

“Since the crisis and the high-profile collapse of Lehman Brothers, organisations have had to change their attitudes to how they operate. That might be cutting back their investment banking units and focusing on other, perceived as less risky, operations or simply an attitudinal shift. The way the traders spoke to the risk and compliance teams within investment banks 15 years ago versus today is vastly different.”

So if risk management is taking centre stage in terms of internal recruitment drives, how is the banking sector responding to the looming threat of fintech and rising stars of Silicon Valley “eating their lunch”?

J.P. Morgan Chase chief executive Jamie Dimon has expressed this concern publicly in recent letters to shareholders. “Hundreds of startups with a lot of brains and money working on various alternatives to traditional banking” keep him awake at night.

And seemingly the banks accept their fate. Capgemini’s World Banking Report 2016 finds 90 per cent of banking executives acknowledge the need to innovate and the rising threat from fintech, with almost two thirds of them viewing fintech as partners, either through collaboration or investment.

It sounds like a win-win. Banks benefit from their creative, fleet-footed and cool younger brothers, while fintech firms enjoy the banks’ stability, risk management expertise and the regulatory experience of more-established brethren.

Or as Greg Baxter, global head of digital strategy at Citi, says: “The ‘industrialists’ need innovation and the ‘innovators’ need industrialisation.”

Strategically, you can see the mutual benefits. But culturally, it begs the questions around a war on talent and whether the two sides can truly integrate or if there’s resistance from either side.

We now comfortably hire from the likes of Google, Facebook and PayPal

Mr Maguire agrees: “We are not resistant to change at all. We are trying to borrow as much as we can from the digital world and fintech. We accept there are big issues to overcome, but we also see there are bigger wins for both parties – why would we reinvent things that already exist?”

As with many of the UK’s leading retail banks, HSBC has joined forces with various technology firms to develop robotics, biometric solutions and facial recognition applications for enhanced identity verification.

By advancing and collaborating with technology innovators, the draw for young talent is far stronger than it has been historically.

“We don’t have to do it all ourselves, but these advancements allow us to attract the types of people who even three or four years ago wouldn’t want to be anywhere near a bank. We now comfortably hire from the likes of Google, Facebook and PayPal,” he says.

Perpetuated by the financial crisis, people’s motivations are evolving. Once inspired by the desire to design complex derivative products to make a lot of money, today’s engineers are about problem-solving and bringing everyday technology solutions, used so commonly with lifestyle applications, into banking.

Mr Enver points out that fintech firms, often with high levels of financial backing, can afford to pay top dollar for the best people. But it’s not just about money, he says. They can offer the corner office, flexible working and the casual dress code to appeal to the millennial generation who are critical to the future of the banking sector.

“This alternative, modern sector appeals to particular social groups born into technology. They have also entered their working lives after a financial crisis, so have a negative view of banking full stop, perhaps without really understanding the intricacies of the differences between investment, corporate and retail banking. Therefore startups are considered more attractive,” he says.

Mr Enver suggests relaxing traditional search criteria, bringing in talent at a junior level, investing in training and development, and casting the net wider than just London and the UK.

Alastair Turner, chief executive at specialist PR agency Aspectus, says the key difference is that fintechs can sell a much simpler, clearer vision – there is no legacy to overcome.

Whether it’s Metro Bank’s “stores” or Virgin Money’s “lounges” replacing the traditional bank branches, he says small adjustments like this will go some way to re-engaging with the customer, but also with the real economy, winning back hearts and minds.

Mr Turner recognises the all-too-common disconnect within the banking sector when it comes to communications, but has faith the reputational turnaround that has been taking place since the crisis will prove a success.

“Just look at Robert Downey Jr,” he says. “Fifteen or so years ago he was in prison, now he’s Iron Man.”