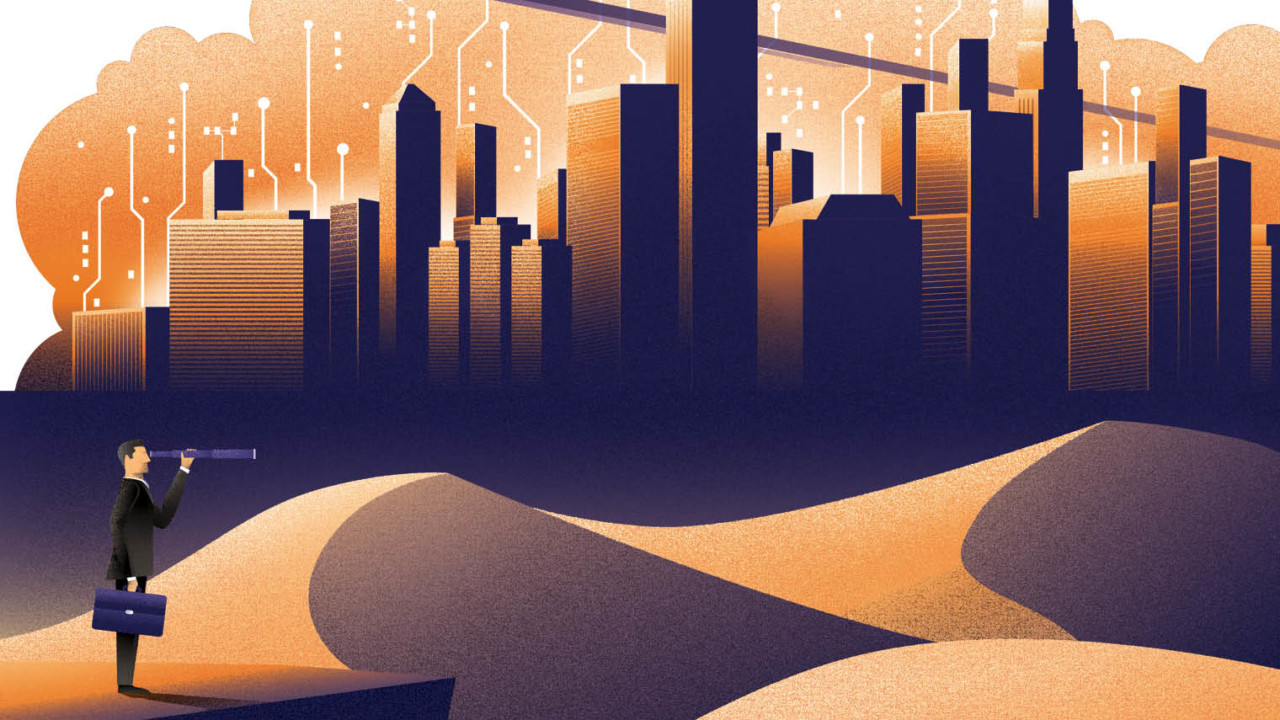 “Software is eating the world,” Silicon Valley venture capitalist Marc Andreessen declared in a famous article five years ago. After munching through advertising, media and transportation, software’s appetite is now being satisfied by banking and finance.

Banks today face competition from a vast array of financial technology or fintech startups that are meeting customers’ needs faster and cheaper online. The question is how do the big banks respond?

“There’s no logical reason why any of the big banks shouldn’t be able to turn this around,” says digital banking expert Jason Bates. “But if you look at other industries that have been overtaken by technology, whether that’s the music industry or newspapers, there’s very few of them that you could point out that have made the turn.”

Mr Bates co-founded two digital challenger banks in the last five years, Monzo and Starling, and now works for 11:FS, a startup digital banking consultancy. It’s startups like Monzo, Starling and their ilk that are fuelling fears that traditional banks could be reduced to “dumb pipes”, a phrase floated by Citi research analysts in a note at the start of last year.

The theory runs that innovative new fintech companies, or indeed tech giants like Facebook or Google, will win over customers with zippy websites and apps. The banks will be reduced to providing the underlying products, invisible to the consumer. The upstarts cream off the majority of the profits thanks to their direct relationship with the customer, while traditional banks compete among each other for business with these new platforms, driving down margins.

These fears are being driven not simply by new market entrants, but also by legislation. Both UK and European regulators are pushing “open banking”, a new regime that would force lenders to share otherwise hidden data, making it easier for consumers to compare banks and products.

This mandated data-sharing and adoption of APIs – essentially digital ports that allow third parties to plug in to the underlying services – will allow companies to build products on top of the bank’s infrastructure, as well as opening the way for marketplaces like those that have taken over the insurance market. Think GoCompare, but for current accounts or mortgages.

“Banks are going to be forced into being not just an average provider of all products,” says Chris Geldard, head of global banking at financial services consultancy Capco. “They have to be best in class and they’ll have to switch some things off. With open banking, it’s going to be a much more competitive market.”

How banks can adapt

How exactly can banks navigate this brave new world? The challengers themselves may prove the best guides.

“There’s always this impression that banks and fintechs are enemies, which is wrong.” says Shane Williams of UBS. “Actually, the banks see fintechs as a great way to understand what they’re doing and how to advance.”

Building in-house products inspired by fintechs, as UBS has, is one approach to the new innovation onslaught. Another is buying the smart upstarts.

It’s really about the courage, vision and leadership to change who you are

“Facebook, Microsoft, Google do that all the time,” says Mr Bates. “They make acquisitions both to protect themselves and also to grow their internal capabilities, and keep that entrepreneurial culture.”

Spanish lender BBVA is the most high-profile example of this model, buying US online bank Simple, Finnish startup Holvi and taking a significant stake in app-only British banking startup Atom in recent years. “BBVA decided quite early on they were no longer a bank, but a financial services software provider, as they put it,” says Nicolas Parmaksizian, head of digital at Capco.

A third route is partnering with nimble new players. This is not only easier than trying to ape the startups, but also presents opportunities for cost-cutting, something banks desperately need to do in the current low-revenue environment. Mr Parmaksizian says: “I had some clients who said, of all our core competencies, the only thing we want to retain in-house is our risk function. Everything else, from front-office distribution to back office, we’ll outsource or we’ll partner. It’s very much about understanding what are you great at?”

The most obvious area where outsourcing can cut costs is in capital markets. Dozens of startups are trying to apply distributed ledger technologies, also known as blockchain, to markets like securities and bonds. London startup SETL, for example, is developing technology to allow banks to trade directly with each other and thereby reduce costs by cutting out intermediaries.

“I think within three years the landscape will be almost unrecognisable,” says Peter Randall, SETL’s chief executive. “Think about what John Cryan [Deutsche Bank chief executive] said the other day. He reported that they have 5,500 separate technology platforms at the bank. Those 5,500 have to be skinnied down and a distributed ledger is an extremely good way of doing that.”

According to Capco, there is a fourth, more radical alternative, to the “build, buy or borrow” approach – the “phoenix” option. This involves carving out a new, rival organisation within the bank that aims to cannibalise it from the inside. He points to First Direct, the telephone-only bank launched by Midlands Bank, later acquired by HSBC. Again, this has precedent in the tech world – Facebook’s induction handbook implores staff to build the product that will one day destroy it. Better they do than someone else.

Capco is currently working with an American bank pursuing this path, launching a mobile-only bank targeted at millennials run by an entirely separate team within the bank. Mr Parmaksizian won’t name the lender.

Ultimately, there’s a spectrum of approaches to digital. Different solutions will work for different problems. A bank may want to start an internal challenger to tackle the problem of current accounts, outsource back-office functions to a blockchain startup and partner with an online lender for business loans.

“The future is uncertain,” says Mark Mullen, chief executive of app-only challenger bank Atom. “At a conceptual level it’s more important that you engineer agility and flexibility into your business than it is for you to know the future.” The important thing, he says, is that banks are willing to try and willing to fail.

The experts agree that the biggest challenge for banks when it comes to digital may have nothing to do with technology at all.

NATWEST: TECH DRIVES CUSTOMER SERVICE A bank’s precise approach to digital will depend on its priorities. “At NatWest our aim is to be number one for customer service by 2020,” says Kevin Hanley, the bank’s director of innovation. “A huge part of reaching this goal will depend on delivering great products and services to our customers. “To achieve this we need the very best in cutting-edge technology and this will only be delivered by partnering and collaborating with the most innovative companies both at home and abroad.” NatWest has a network of scouts in the UK, Israel and Silicon Valley, constantly on the look out of the most promising startups that the bank could work with to meet customer needs. The bank has also partnered with tech accelerator RocketSpace in London. The tie-up lets it keep an eye on the pipeline of innovation in the sector in return for mentoring tech startups. Mr Hanley says: “In just the last few months we have worked with Facebook, conducted trials in artificial intelligence and explored quantum computing.” He adds that NatWest recently partnered with an Israeli security firm called BioCatch that was spotted by the scouting network. “The partnership will enable NatWest to monitor how people use online and mobile banking so that we can detect the difference between genuine customers and fraudsters,” says Mr Hanley. “Our board and senior management team now meet every month to discuss the latest technological innovations within the bank. I can assure you we’ll be unveiling many more exciting updates in 2017.” BBVA: SOFTWARE COMPANY AND BANK Spain’s biggest bank by assets, BBVA was one of the earliest movers among the big banks when it came to fintech. BBVA’s chairman told the Mobile World Congress in early-2015 that BBVA would be a software company in the future and not simply a bank. To this end BBVA has pulled off a string of acquisitions in the fintech space, most notably spending $117 million on US digital bank Simple in 2014, and last year spun out a $250-million fintech-focused venture capital fund, Propel. Clearly, BBVA is a believer in the “buy” model, rather than building in-house fintech products or partnering with startups. But chief executive Carlos Torres Vila, who ran digital banking before taking the top job, says digital transformation is about more than just nifty technology. “Transformation has to be accompanied by a cultural shift, because it is people that make it possible,” he told December’s IESE Business School’s Banking Industry Meeting. “We are doing a lot, but we still have a lot to do.” He called for “an end to so-called management silos” and a global, rather than local, approach to banking. BBVA acquired Silicon Valley design firm Spring Studios in 2015 to work across the banks entire product line to give it a unified feel and universal logic, just one example of global thinking at the bank when it comes to digital. “Technology and innovation are for the ultimate benefit of financial services’ consumers,” he concluded.