So limited is our collective self-knowledge that until a decade ago, mainstream economic theory presumed Homo sapiens to be perfectly rational actors. It took Richard Thaler’s Nobel Prize-winning work in the then-nascent area of behavioural economics to demonstrate that, on the contrary, the most rational approach to studying economic activity is to anticipate predictable human behavioural biases and cognitive blind spots.

Money is an area of life that carries an unusual amount of emotional and social baggage. “Money is still the biggest taboo in our society,” says Michelle Highman, chief executive of the Money Charity, a financial capability organisation. It is seldom discussed openly in the UK, even among family and friends, so many people don’t receive the advice and support they need. “Sometimes the first time people will have spoken about money and the impact it has on themselves and their relationships is in one of our workshops,” Ms Highman says.

Personal money beliefs and values arise from a complex web of early money experiences, personality traits and self-esteem. “People’s attitudes to money are set and defined at a very young age. From five to seven years old, money habits, particularly self-control, are well established,” says David Haigh, financial capability director at the government-run Money Advice Service. “When a child enters the education system, it is a critical moment to help them understand value and to establish behaviours around delayed gratification that will last into adulthood.”

Underpinning so many money management issues is poor numeracy. Nearly 50 per cent of working-age adults in the UK have a numerical ability equivalent to an 11 year old, the Money Advice Service reports. Alongside concerted efforts to raise numeracy levels, it recommends addressing the impact of distortions of confidence upon financial capability. Some people make poor financial decisions through underestimating their numerical ability, while others who are overconfident blunder into financial mistakes.

Given the link between money problems and poor mental health, there is an urgent need to help people build their financial capability and resilience. According to Citizens Advice, eight out of ten NHS mental health practitioners treating anxiety and depression also deal with their patients’ non-health issues, most commonly debt and money problems. 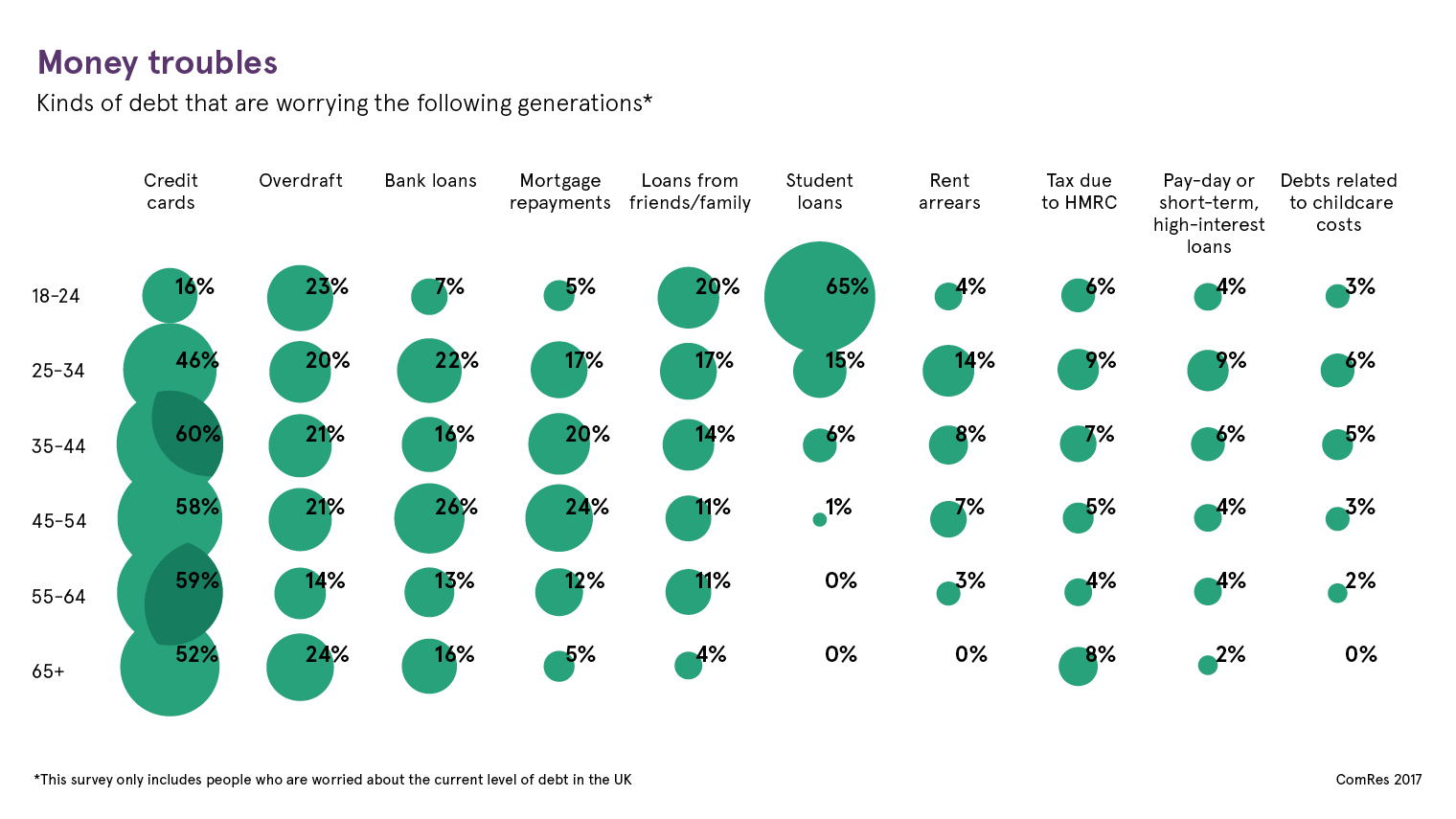 The Money and Mental Health Policy Institute also finds that mental health problems exacerbate dysfunctional money management. Some sufferers spend to alleviate feelings of anxiety or low self-esteem, some avoid engaging with their finances, letting bills pile up or bank statements go unread to avoid anxiety. Research by the Dutch bank ING shows that in Europe, 10 per cent of those in debt are unaware of how much they owe.

It was feared that a cashless society would remove the stops on consumer spending, making it more difficult to exercise self-control

Although it was feared that a cashless society would remove the stops on consumer spending, making it more difficult to exercise self-control, research bodies such as the Money Advice Service and the Money and Mental Health Policy Institute are optimistic about the potential of fintech apps to help consumers better comprehend how the financial environment affects them and to take control of their finances.

Hundreds of apps have sprung up that help consumers visualise, organise and analyse their spending. Applying findings from behavioural economics, such as nudge techniques in the form of push notifications, and using customer-friendly and intuitive user-experience techniques, these apps inculcate good financial habits and help consumers set, monitor and reach financial goals.

Prepaid debit card Pockit addresses the accusation frequently levelled at fintech that it caters to a self-selecting community of the financially savvy. Pockit helps the unbanked and those with a very poor credit rating gain access to services such as direct debit payments and cheaper online prices that might not otherwise be available to them.

Another, Money Dashboard, allows users see all their online accounts in one place, automatically categorising bills and outgoings, and enabling the setting of budgeting goals.  While Moneybox targets first-time investors, such as millennials, training them to make small manageable investments, from as little as £1, into ISAs.

The range of these fintech apps and services is only set to increase under the UK’s open banking reforms. Consumers now have the power to compel their banks to share their data with third parties, in the hope that such transparency will drive innovation and increase competition.

But others sound a note of caution. Mike McAteer, co-founder of the Financial Inclusion Centre, warns: “Fintech is not a panacea for fixing the perennial problems of information asymmetries, and sub-optimal consumer behaviours and decision-making. If anything, fintech provides more opportunities to exploit embedded consumer behavioural biases and utilise confusion-marketing and cross-selling techniques to charge higher prices and extract more value.”

Alistair Newton, vice president of research at technology consultancy Gartner, argues that with big banks facing fierce competition from alternative providers, a new premium will be placed on customer retention and trust, particularly given the security concerns around data-sharing. He believes banks will shift focus from revenue generated through consumer overspending, to customer service-focused empathic banking that reads between the lines of their consumers’ spending and forefronts wellbeing.

Currently most consumers are not interested, with two thirds not willing to share their financial data, according to Accenture. But now that the Pandora’s Box of open banking has been prised apart, the market is expected to sweep consumers along. It also leaves the door open to big tech; in America, Amazon has already made tentative moves into banking.

What is clear is that in the big data and cashless era, financial self-awareness should be a priority for consumers. Without most consumers knowing it, we are moving, in the words of digital finance commentator David Birch, from using money that we think we understand, to using money that understands us, more often better than we do.