With the eurozone an uncertain market, capitalising on global export opportunities, particularly in America and China, is more important than ever

Exporting is a strange and challenging business. Vital to a nation’s economic and cultural self-interest, not to mention its sense of self-worth, it can often be overlooked or misunderstood. Take a lazy pair of assumed narratives about Britain that we no longer make anything of great worth, still less anything that an informed foreigner would want to buy. Nothing could be further from the truth.

Export volumes jumped 2.4 per cent year-on-year in December, according to the Office for National Statistics (ONS). Manufacturing output rose in January on higher export orders, offering yet more encouraging data for an economy in solid recovery mode, says Paul Hollingsworth, an economist at Capital Economics.

Britain’s export story is nuanced and compelling. It starts and ends with the City of London, perhaps the country’s greatest single asset. Business and financial services account for around 55 per cent of all outbound sales, with fast-growing emerging markets from China to India to Nigeria desperate to import knowledge in industries stretching from legal affairs to fund management to public relations. Little wonder some see London, which generates more than a fifth of all national economic output, as a juggernaut, towing the UK in its wake.

If Germany stands for stolid manufacturing excellence and the French for flair and fashion, Britain is an amalgam of traits

There is life beyond the capital. At one level, it’s remarkable how little the export mix has changed in recent decades. Britain is still a major producer of completed automobiles, shipping £23-billion worth of cars overseas in 2014, according to the ONS, up 8.2 per cent year-on-year. After that comes a dizzying array of products as old as the hills, from oil and valves to medical equipment and gas turbines, evidence of our maturity as a crafter of complex manufactured goods. The UK earns billions of pounds each year from the export of telephones and computers, and does a roaring trade in human and animal blood.

Yet this is also a country in a fascinating state of flux. If Germany stands for stolid manufacturing excellence and the French for flair and fashion, Britain is an amalgam of traits.

To customers in the United States and the Middle East, key markets for British manufacturers, the UK will always stand for a gentility that never quite goes out of fashion.

Burgess, a global leader in the construction and charter of super-large yachts with sales of £1.2 billion in 2014, trades firmly on the reputation of its founder. Nigel Burgess was the “quintessential British gentleman”, says marketing director Alev Karagulle, “cordial and polite, and immaculately attired in a pinstripe suit”. Mr Burgess passed away in 1992, “but his tradition of doing business with a handshake and a smile lives on”, Ms Karagulle adds.

What surprises many is the burgeoning strength and flexibility of the national brand. From Japanese executives, clad in Paul Smith, to Emirates billionaires, ensconced in their Range Rover Evoques, “Made in Britain” really means something.

When Lee Newton, chief executive of Essex-based events specialist Media 10, took 50 British designers to China last year to showcase their wares, he didn’t know what to expect. Nearly 50,000 mostly trade customers flocked to Design Shanghai, his inaugural two-day show, to goggle at everything from UK-made jewellery to furniture to timepieces.

Contacts were made and sales soared. “There is a genuine hunger for well-made British products in China,” says Mr Newton. “They love everything from their history to their design excellence.” This year’s event, he says, will be even bigger.

Mr Newton’s success shows that exporters of any size can be successful given a bit of ambition, gumption and support. Angloco earns £17 million a year exporting Yorkshire-made fire engines to the Middle East and Africa. It is now expanding into Oman and Trinidad and Tobago with help from UK Trade & Investment.

Parker & Farr’s range of bespoke armchairs, lovingly stitched and sprung in Nottinghamshire, come with lifetime guarantees. “We’re the Rolls-Royce of sofas,” says the firm’s managing director Tony Crinion, invoking another great British success story. With prices starting at £2,500, a Parker & Farr doesn’t come cheap. But that hasn’t crimped its expansion into China. “They love the Britishness of our product and that we are a supplier to Buckingham Palace,” he says.

Indeed, while there are few short cuts in life, becoming a supplier to the Royal Family may be one. “If you want to get on and get up in the United States as a British firm, the advice is simple: get a royal warrant,” advises Allyson Stewart-Allen, founder and chief executive of International Marketing Partners, a business consultancy with offices in London and Los Angeles.

Another curio is how the UK is viewed depending on where you are in the world.

Americans lap up British accents and entertainment, from pop music to Downton Abbey. “Cinema, theatre, Broadway shows – you’d be staggered how much of it is British in origin,” says Ms Stewart-Allen. Yet in areas like fragrance, accessories and cuisine, UK brands barely register in America, barring a few standout names.

The story is different in the Middle East and Asia, as well as western and southern Africa, huge growth markets for everything from Black Orchid Interiors’ glitzy, blingy furniture to Anya Hindmarch handbags to waxed Barbour jackets. Even British cuisine has cachet, helped by superchefs, such as Jamie Oliver, and specialist foodmakers, including Rococo Chocolates, which generates £3 million in annual sales, mostly via exports to the Middle East, East Asia and Latin America.

“When I started Rococo, there were no cult luxury British chocolate brands, but now London alone has several dozen,” says Chantal Coady, who founded the firm in 1983. “It’s a really creative, vibrant export market.”

Not all nations and regions are sure-fire winners. Get the branding right, and British products sell like hotcakes in the Middle East, Asia and North America. India, with its swelling middle class, is another growth market. Leicestershire-based Triumph sold 4,000 British-made motorbikes in the country in 2014; that number is set to rise to 10,000 this year.

Perhaps the only genuine cause for concern is Europe. Of the top-five sovereign destinations for British exports, four are European. Monthly sales to the 28-strong EU bloc of nations have remained flat since the start of 2011, at around £12 billion. Exports to Holland fell 5.4 per cent in the first 11 months of 2014, according to HM Revenue and Customs (HMRC), with French imports of British goods down 12 per cent. Parker & Farr notes that, while the eurozone remains important, customers are “increasingly careful with their pennies”.

In the short term, Europe remains the biggest buyer of UK-made goods; over the longer term, it may make better sense to infiltrate growing, confident markets, from the Middle East to Africa to the two markets likely to define the future of many if not most UK exporters, America and China. The first of those buys more British-made goods than any other nation, while exports to the latter surged more than 40 per cent in 2014, according to HMRC, much of it involving high-end, high-margin goods made by some of the UK’s most vibrant, creative companies. 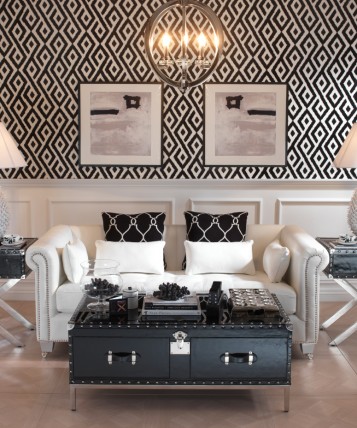 Some retailers start out in the high street before migrating online. Others take the opposite route. Sally Chamley’s Black Orchid Interiors began life using eBay to sell high-end furniture to affluent customers in London. Four years ago, keen to take her firm to the next level, she secured £1.4 million in capital from a London-based angel investor.

Since then, the ten-year-old company, which makes exquisite home furniture ranging from quartz mirrored console tables to elegant ebony chairs, has found its groove. Fresh funding and advice allowed Ms Chamley, 34, who describes herself as a “natural entrepreneur unafraid to think outside the box”, to form a long-term business plan. A turning point came when House of Fraser began selling her designs at its flagship store in London. Black Orchid gained scale, keeping a large share of production fixed firmly in Britain.

But the ticket to true export success came from a bold foray into franchising. This can stop some companies cold in their tracks or prove their making. Ms Chamley says she “fell in love” with a business model that allowed her to keep control of pricing and branding. A Qatari investor paid a six-figure sum to operate six Black Orchid outlets in the tiny Gulf state and from there the business snowballed. Next on the radar are similar deals in Saudi Arabia, Dubai and India. The firm is in “fast-growth phase”, Ms Chamley says, with turnover projected to rise from £1.2 million last year to £10 million-plus over the next decade.

Business gets an extra boost in summer, when the monied denizens of Dubai and Doha decamp to London to escape the blazing heat. A Saudi buyer on a chance visit recently bought a 40-foot container of Black Orchid furniture, which he shipped back to Riyadh.

So what ultimately made the business click, apart from hard work, design brilliance and a handful of well-timed decisions? “In one word: London,” Ms Chamley says. “The Middle East is our largest export market and they love London there. Our furniture has an English style to it, but it’s also a glitzy, blingy ‘London look’, from the black-and-gold trim to the studs on the furniture – and that goes down a treat.” 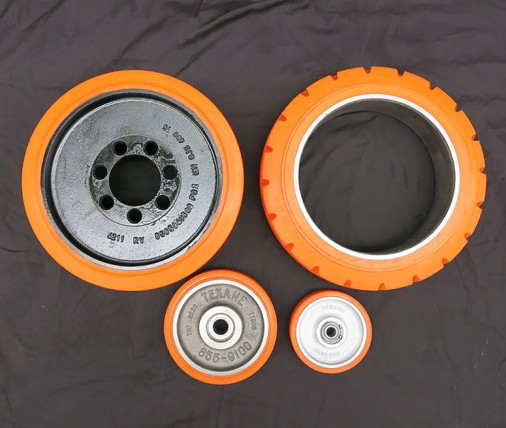 Have you ever stopped to ponder the escalators that propel us forward and upward at the world’s busiest metro stations and airports? Chances are you’re staring at the result of engineering excellence stemming from a factory located in Market Harborough rather than Munich or Mumbai.

Texane’s products are unwittingly used by millions of people every day: the Leicestershire-based firm literally makes the ground beneath our feet. Founded nearly 50 years ago, it was transformed in 1999 after being taken over by Arnab Dutt, a north-London-born entrepreneur.

He saw that the firm needed to hone its product range to survive. It also needed to crack the export market – no small feat for a small manufacturer in a country then obsessed with financial, not industrial, engineering. But he persevered, shifting production to a specialised, higher-margin product: the super-tough polyurethane wheels used in everything from agricultural machinery to gas pipelines to car plants. In just 15 years, he was a global market leader.

Texane’s British-made industrial wheels are now found embedded deep within escalators and luggage carousels at the Paris Métro, New York City Subway, Gatwick Airport and beneath the trains on Coney Island’s heart-stopping roller coaster. Key export destinations include Germany, the United States, France and Australia. Mr Dutt intends to export more than half the firm’s output in 2015, while expanding into Asia and the Middle East.

His advice to smaller British firms is “not to go it alone in key markets”, but to lean on help and advice from trade associations, UK Trade & Investment, and the commercial divisions of British embassies and consulates.