When Massimo Ferragamo went to America for the first time, his mother insisted that they travel by boat – just as his late father had done in 1915. Salvatore Ferragamo went to the States with only a few dollars in his pocket, unable to speak English. But, by the late-1920s, he had begun to sell to the department stores Neiman Marcus and Saks Fifth Avenue, establishing the foundations of his eponymous shoe company and one of Italy’s most famous fashion exports.

Fast forward to 2014, and the business is publicly traded, with recorded revenue of €659 million last year and has 620 standalone stores spread across the globe. Salvatore’s youngest son, now 57, is chairman of Ferragamo USA.

“I thank her to this day,” says Massimo, reflecting on his mother’s decision. “It gives you perspective.” Today, however, the New York resident is enjoying a perspective of a different kind as we take in the view from the clubhouse of the spectacular golf course at his 5,000-acre Tuscan estate, Castiglion del Bosco. 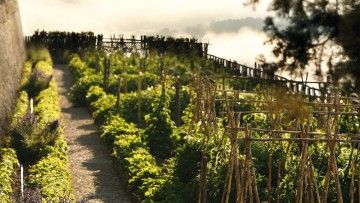 But unlike Italians and handmade shoes, Tuscany and golf are not a famous combination. For one thing, the dry summers don’t easily lend themselves to the demands of course maintenance. On top of that, the region’s unmistakable landscape is not to be dug up and rearranged lightly, especially not on an estate that has Unesco World Heritage status.

In fact, Massimo says, when he bought the property in 2003, a golf course hadn’t featured in his plans, but then he had never intended to acquire an estate of this size. “When I first saw it, it conquered me. I was bowled over, even though it was totally rundown. It had all the ingredients and so we embarked on getting it back into shape,” he says.

Massimo has had some lessons and hit a few balls, but even now isn’t a particularly zealous golfer. It was the wise counsel of some friends that convinced him to bring the game to his Tuscan retreat – another piece of advice that he is glad he took.

It was “the biggest decision” that he faced in restoring and redeveloping the estate, but at the same time a deliberate effort was made to “hide” the course, to prevent it from dominating the property. Instead, as you drive up the winding gravel road for the first time, you merely catch glimpses of fairways and greens. There’s little to suggest that an immaculate Tom Weiksopf-designed golf course, complete with the longest hole in Europe – the 685-yard 13th –  is lurking beyond the trademark Tuscan cypress trees.

This is because Massimo doesn’t want Castiglion del Bosco to be a golf resort per se, but instead has set out to create a place where golf is one element of the whole experience, sitting alongside a winery, and the hospitality offered by the twenty suites and three rooms in the restored “borgo”, as well as ten villas dotted around the estate.

The borgo – the closest English translation would be “hamlet” – also has a 14th-century chapel, complete with a recently restored Pietro Lorenzetti fresco, and sits in the shadow of the ruined 12th-century castle that gives the estate its name. This, coupled with the strict rules that come with being a World Heritage site – old buildings can be restored, but no new ones can be built – means that coming here is not unlike entering a time-warp.

Having Italian friends who always dress like attendees of Milan Fashion Week, I had been expecting to feel under-dressed, especially at dinner in the smarter of the two restaurants. There are white linen table cloths and the head waiter tells me that he hopes its modern interpretation of traditional Tuscan dishes will soon earn a Michelin star. But here, and throughout the estate, there is a distinct lack of stuffiness. This could be American influence – around 40 per cent of guests come from the United States – but the place also manages to feel authentically Italian. 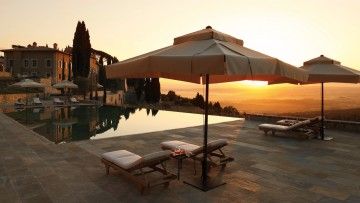 The interiors of the suites and villas have been designed by Florentine designer Teresa Burgisser in consultation with Massimo’s wife Chiara. There is an emphasis on luxury, which you would expect when prices range from €510 a night for a room in low season, up to €7,800 a night for one of the secluded private villas in high season. The aesthetic isn’t ostentatious. Think marble, stone, linen, homely soft furnishing, with highlights in brass and wine-coloured leather, quite different from the idea of “luxury” that pervades the gilded seven-star hotels of, say, Dubai.

On a tour of the vineyards given by Sabine, a charming polyglottal Dane, it is explained that, as one of 250 wineries in the Montalcino appellation, Castiglion de Bosco is permitted to produce Brunello, the gold-tinged red made from the Sangiovese grape. However, being in the right place is only the start. Brunello must also have an alcohol content of at least 12.5 per cent and be kept in a cellar for a minimum of five years. Within that time, the wine must spend at least two years in the barrel and four months in the bottle. Brunello accounts for about 120,000 of the 220,000 bottles these fertile slopes produce each year and so there is room in the refurbished cellars for a lighter rosso, a punchy Prima Pietra, and a syrupy vin santo Occhio di Pernice. 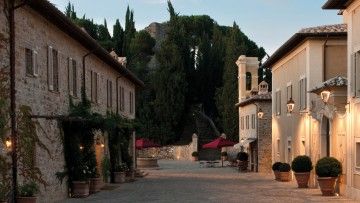 Tastings and tours are pitched at oenophiles with any level of wine knowledge, but the truly committed can pay €8,000 in order to join the Millecento Wine Club and take ownership of one of 200 temperature and humidity-controlled lockers in a specially created cellar, along with €2,500-worth of wine and a range of member benefits. The subterranean room is the setting for occasional events and tastings. If the need should arise, it could also double as the lair of a particularly tasteful Bond villain. The idea is that wine club members can keep their favourite wines in perfect condition on site and then have a bottle or two brought up to their villa or suite when they please.

Elsewhere on the estate, there are also cooking classes, a peaceful spa, an infinity pool with dramatic views of the Val d’Orcia valley, as well as hiking and biking trails, and a fitness boot camp that takes place in the surrounding woods.

But those who do eventually manage to fit in a round of golf can expect to be rewarded for their efforts. The course is woven – rather than cut – into the Tuscan hillside and it is utterly pristine. The only traces of divots or pitch marks that I see during my round are ones that I make myself, although this has the downside of inspiring pangs of guilt. 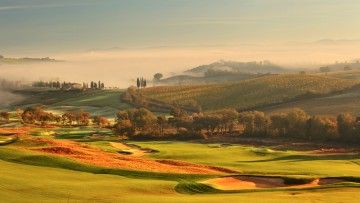 What’s more, apart from a small army of green-keepers, the course is almost deserted. So there is no stress when it comes to booking a tee time and the chance of getting stuck behind the group in front is vanishingly small. This is partly because Castiglion del Bosco claims to be the only private golf course in the whole of Italy.

Elsewhere in the country, membership of one golf club allows players to pay and play at any other course. But to play here, you either have to be a guest or a member and, as things stand, there are only 100 of those.

The club is admitting more people, and improving its locker room and dining facilities, but will cap the total number of members at 350. This, coupled with the fees – €45,000 to join and annual dues of €3,500 – serves to maintain an air of exclusivity. “But it is not done for any snobbish reason,” says Massimo. “If we opened it up for everyone, our visitors would have to queue up. So we wanted to keep the exclusiveness and the beauty of the place.”

In keeping with the rest of the estate, there is a relaxed atmosphere, largely thanks to the pair of affable 20-something Scots who man the clubhouse. When I finish my round, I get chatting to one of them about the people who play here. Obviously, he says, everyone has money, but it is often the very wealthiest people who are the most down to earth and laid back.

A surprising observation maybe. But it does at least make sense that those people would feel at home here – a corner of Tuscany carefully tailored to a particular, relaxed version of La Dolce Vita.