The price of oil is back around $60 a barrel and natural gas is projected to provide 45 per cent of power generation by 2040. Rebounding market fundamentals, quests for production independence and protection of market share, as well as geopolitical tensions, continue to drive both optimism and scepticism within the industry. With renewable energy projected to account for the majority of new generation capacity to 2050, what does the future hold for oil and gas?

The current critical importance of oil and gas to the energy mix is undeniable, but as the markets continue to evolve, it’s important to understand what’s driving changes in both demand and supply. Energy demand can be effectively split into three areas: electricity, where the biggest source remains coal; transport, still predominantly oil based; and heating, which is currently dominated by gas. As the demand patterns change for these sectors, so does the industry overall. 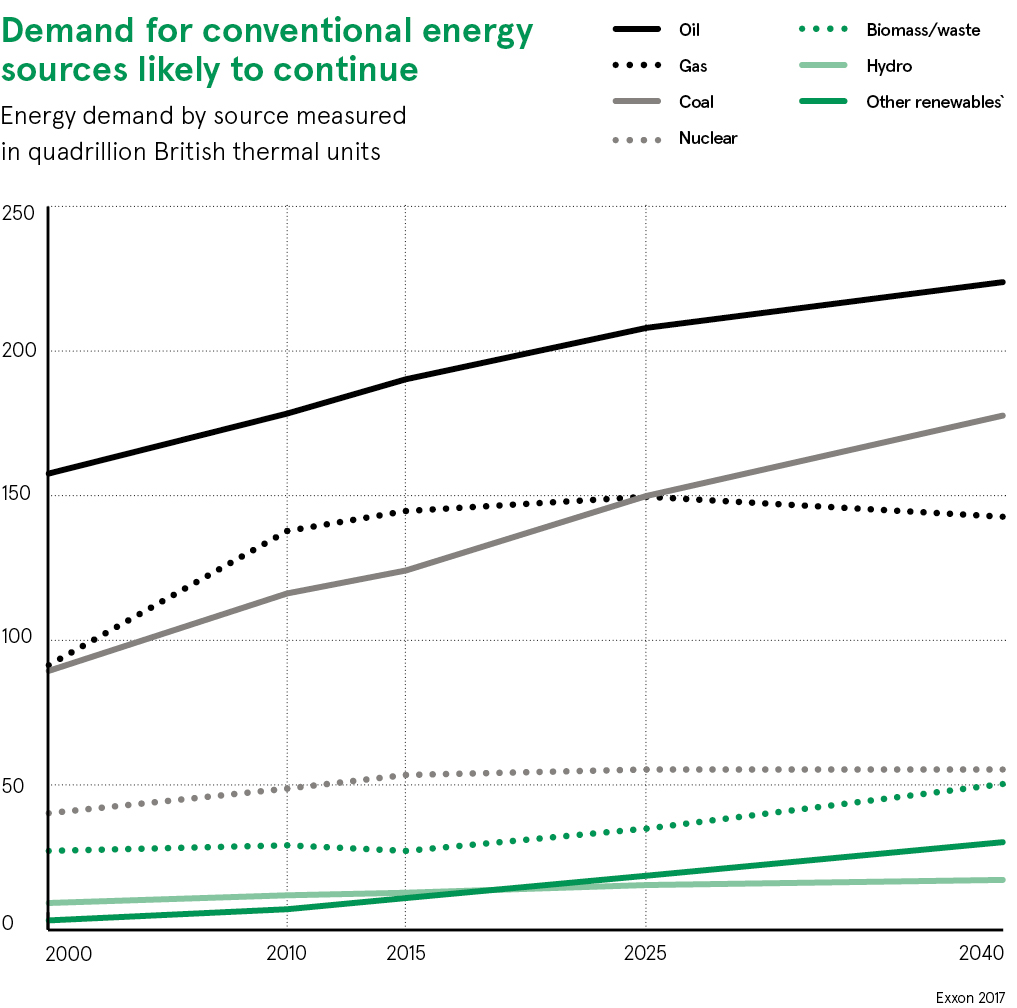 Guy Doyle, chief energy economist at Mott MacDonald, points out: “Unconventional hydrocarbons have already changed the global dynamics for oil and gas markets, led by developments in exploration and production technologies applied in the US.” Supply no longer seems to be a concern.

According to the International Energy Agency (IEA) World Energy Outlook 2017, overall energy demand is set to expand by 30 per cent between now and 2040, at around 1 per cent a year, with the global economy growing at an average rate of 3.4 per cent.  Over the longer term, the IEA foresees that under the existing and announced policies, oil demand growth will continue into the 2040s.

As Laszlo Varro, IEA chief economist, says: “When you tell a story about the future, unavoidably you make assumptions. Over the longer term, political and technological questions multiply.” Under its Sustainable Development Scenario, where regulation is imposed to achieve deep emission cuts, the IEA expects to see oil demand peak in the 2020s and be in decline by more than a million barrels per day by the 2030s.

Mr Varro says the energy mix will undergo a significant shift, with the lead taken by natural gas, by the rapid rise of renewables and energy efficiency. Continuing decline in energy intensity, due to the changing structure of the global economy, is likely to have a major impact on energy demand, he adds.

Predictions of peak demand are dependent on many variables, including investment interests, market size and government policy. Stephen George, chief economist at KBC, says: “Everybody uses different scenarios, and these strategies need to be resilient and robust. KBC predicts no peak for oil, only a plateau at around 2040 of around 110 or 111 million barrels per day. It doesn’t show a peak and drop by 2050, which is the furthest most projections go.”

While he accepts that electrification will have an impact on oil demand, Mr George doesn’t believe that electric vehicles will be the solution everywhere. In the United States there will be cultural issues to overcome, in India there will be infrastructure challenges. He adds: “Our view is a slowing down of oil demand, retreat from coal and massive growth in natural gas. Petrochemicals will grow as fast as oil demand for power drops.”

Natural gas use is expected to increase by 45 per cent to 2040 in the power sector. At the same time natural gas has a more diversified set of applications than renewables, particularly for high-temperature industrial use and transportation. Mr Varro points out that around half of industrial heat use is high temperature and natural gas also has an important role in household energy consumption. In China, for example, natural gas is benefiting from air pollution regulations and its liquefied natural gas imports were up 42 per cent last year.

One concern of increasing importance is stranded assets. Mr Doyle says: “On a pure energy cost basis, renewables will be cheaper than new gas or coal generating plant.” Mr Varro points out that a few years ago, when capital investment in the oil and gas industry was around $800 billion a year, this might have been a fair criticism, but the investment cycle has changed.

2015-2016 saw a 25 per cent cut in upstream capital investment two years in a row and it has remained low. Companies have been focusing on short-cycle projects with average lead times down at around three years. Mr Varro also points out we are already seeing repurposing of plant; in Italy and France refineries are now working on biodiesel.

He says: “It’s not that some investors won’t make mistakes, but overall what we see is a remarkable change in the industry’s investment strategy.” What we’re seeing is recognition that oil and gas will remain important energy sources, but not necessarily in the way analysts predict.

No matter what, population growth, combined with the demands of the emerging global middle classes, is expected to keep consumption of oil and gas increasing for some time to come. Flexible dynamic thinking and responsiveness will be crucial to strategic success in the sector.