As the utility industry continues to undergo major transformation driven by decarbonisation, decentralisation and digitisation, an emerging business model, known as ‘energy-as-a-service’, is set to disrupt it further.

This broad umbrella term describes the growing sub-market of selling not only energy, but also technology, analytics, personalised services and even access to the grid.

“We are seeing more effort now to develop a new retail model than at any time over the last 100 years,” says James Sprinz, head of decentralised energy at Bloomberg NEF.

The trend is driven, in part, by advances in technology, and the desire of residential and business consumers to reduce costs and/or their carbon emissions. But also, says Mr Sprintz, by major European energy suppliers trying to claw back market share lost to renewables and new markets entrants, such as smaller players including Good Energy and Ovo Energy.

“Energy providers are looking at other things they can sell besides electricity, which has seen a large increase in capital in the market, as well as more mergers and acquisitions,” he adds.

In the UK, most of the Big Six energy suppliers have developed or acquired companies offering new services. Centrica, for example, in 2015 bought AlertMe, a smart tech company that provides energy and home-monitoring hardware and services, and Panoramic Power, which helps companies improve their operational efficiency.

In fact, according to a Bloomberg NEF report that tracked 30 selected companies’ activity in decentralised energy products and services, in 2017 there was an uptick in investments and partnerships in new areas such as battery storage and virtual power plants, but also in existing capabilities including energy management and micro-grids.

These companies are facing competition from outsiders, including Google, with its Nest offering, as well as startups, such as WATTY and ONZO.

“There are many companies looking to move into this sub-sector because digitalisation allows them to aggregate and control assets, resources and demand in a way that previously wasn’t possible,” says Professor David Healey, director of smart energy at WSP.

Though still relatively nascent, this market is poised to grow and diversify, especially with the continued emergence of electric vehicles and smart cities. According to Navigant Research, the energy-as-a-service annual market for commercial and industrial customers is expected to reach $221 billion by 2026. 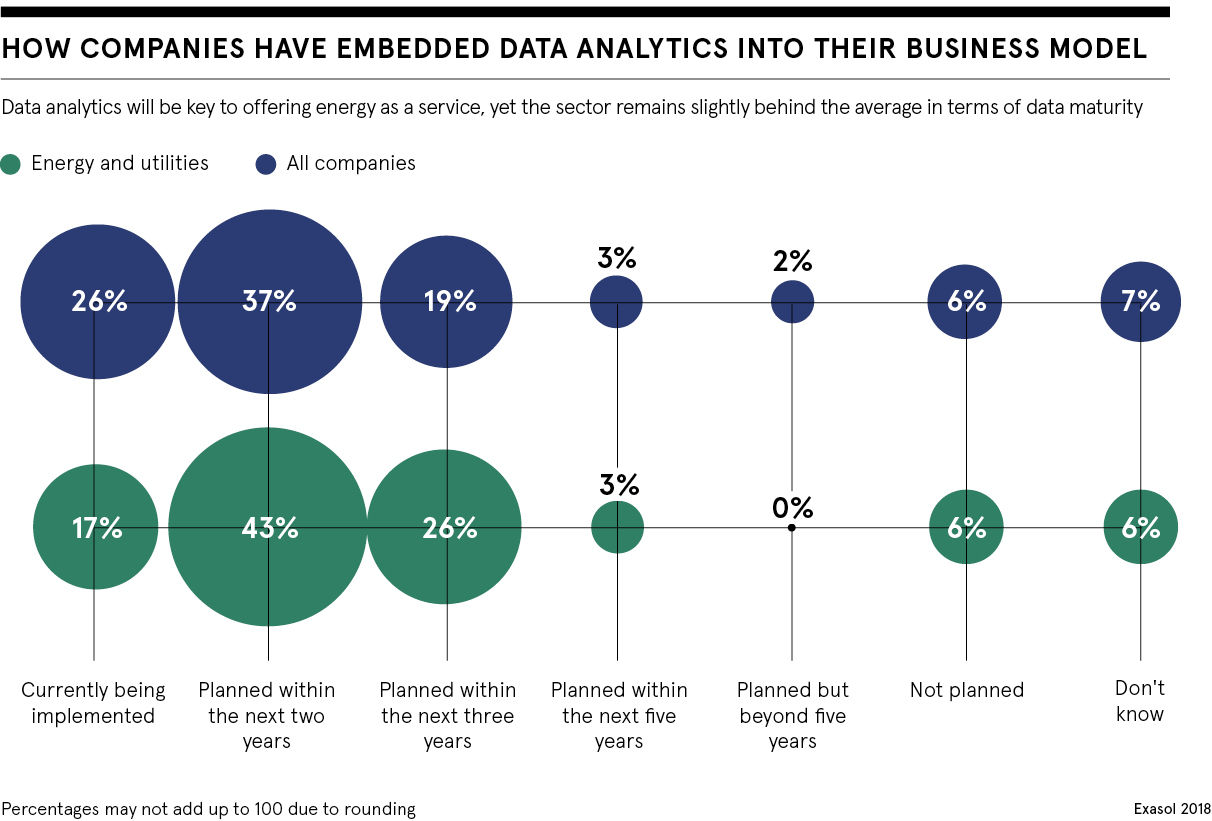 How could offering energy-as-a-service impact the sector?

But what impact will it have on the current structure and hierarchy of the overall utility sector?

“No one can be sure where it will go, but certainly the business models of the large utilities will have to change dramatically over the next five to ten years to keep up with the changes,” says Professor Healey.

As the market continues to move from fossil fuel-based, centralised generation to distributed, greener power, he adds, the sector will see more new suppliers entering the market to offer services locally at a lower cost, utilising local generation supply.

And though it is still quite challenging for new players and startups to enter the complex energy market, says Charmaine Coutinho, a principal analyst for Delta-ee’s New Energy Business Model Service, the sector could see big tech players capitalise on their brand affiliation with more energy-as-a-service offerings.

“In their favour, they have a great understanding of data and data analytics, which is a key part of energy-as-a-service,” she says.

And technologies such as Google’s Nest are, in many ways, a ‘trojan horse’ for the industry, according to Duncan Barnes, partner at Deloitte, and Energy and Resources sector lead for Deloitte Digital in the UK.

“Once a consumer has this technology in their house their agency is with Google not the Big Six,” he says. “Currently, these devices are controlled by customers, but in the future, they could be run by algorithms, so those businesses that can manage data and provide insights will be the ones that succeed.”

Furthermore, smart metering will create even more emphasis around data and the opportunity for same-day switching, “which will make switching more rapid and dynamic”, says Mr Barnes.

Francesco Venturini, head of Enel X, agrees that the boundaries between energy and other sectors will continue to blur through new business models.

“Therefore, traditional utilities, which are not ready to tackle this new ecosystem, are definitely disadvantaged in comparison with those players that decide to deal with these new business
models proactively.”

The future of the energy-as-a-service model promises new revenue opportunities, especially as demand for electric vehicles, smart cities and energy storage grows. But with it also comes uncertainty and disruption.

“We are at a stage where several companies are the market leaders and are making the necessary investments, while others are unconvinced by the demand. Over the next few years, we will see which companies are successful,” Mr Sprinz at Bloomberg NEF concludes.