Batteries are revolutionising the way we use energy, primarily in transport and storage of renewable power. About 1.1 million battery and plug-in hybrid passenger cars were sold worldwide in 2017, an increase of 57 per cent on the previous year, according to Bloomberg New Energy Finance. This year, sales are forecast to increase by a further 40 per cent. Although impressive, this is just a hint of the change about to sweep through the transport industry.

Volkswagen, Toyota and Nissan, among others, have announced ambitious plans, while all new Volvo models will be either partially or completely battery powered from 2019. Jaguar Land Rover will follow suit in 2020. Such is the drive to electrify in China, the world’s biggest electric vehicle market, that two major manufacturers will drop internal combustion engines altogether after 2025. The electric bus market will grow by 33.5 per cent a year to 2025, according to P&S Market Research.

Batteries are also central to overcoming the problem of renewable energy intermittency. Policy-makers in several countries are encouraging their use in conjunction with the growing number of solar panels on homes, schools and businesses. This so-called behind-the-meter deployment of batteries amounted to 466 megawatts in 2017, an increase of almost 80 per cent compared with the previous year, according to Bloomberg.

There are many technologies in use, but lithium-ion is predominant because it is energy dense, more than 80 per cent efficient and can be used in high-power and high-energy capacity applications. The batteries contain a large number of raw materials and, despite the name, contain comparatively little lithium. The other key elements are graphite, nickel, manganese and cobalt.

A central assumption in both the transport and home energy storage sectors is that sufficient quantities of cheap, high-performance lithium-ion batteries will be available to meet forecast demand. Given that the booming consumer electronics industry is also dependent on lithium-ion technology, the stress on the supply chain is bound to increase dramatically. A crucial question will be can the battery industry keep up?

Analysis by researchers at the Massachusetts Institute of Technology (MIT) indicates that for the near future there will be no absolute limitations on battery manufacturing due to shortages of the critical metals they require. “But without proper planning, there could be short-term bottlenecks in the supplies of some metals, particularly lithium and cobalt, that could cause temporary slowdowns in production,” says Elsa Olivetti, assistant professor of energy studies at MIT.

Increased demand for lithium has pushed prices up from around $7,000 a metric tonne in 2015 to more than $15,000 in 2017. Similarly, cobalt has gone from $25,000 a metric tonne in mid-2016 to more than $80,000. The supply of graphite is not thought to be an issue, at least not in the short term. Nickel and manganese are used much more widely in other industries, so a jump in battery production is unlikely to have much of an impact.

To secure long-term supplies of raw materials, some automakers have started investing in materials production

Lithium is either mined or extracted from brine deposits in South America. The latter can be ramped up relatively rapidly, within as little as six months, compared with bringing a new underground mine into production, says Professor Olivetti. Although there might still be disruptions in the supply of lithium, she says, these are unlikely to disrupt battery production seriously. New mining capacity, due to come on line in the early-2020s, will also help to meet demand.

To secure long-term supplies of raw materials, some automakers have started investing in materials production. Great Wall Motors, for instance, has invested in the supply chain and Toyota Group’s trading unit recently acquired a 15 per cent stake in Orocobre, an Australian lithium miner. More upstream investments are expected later in the year. 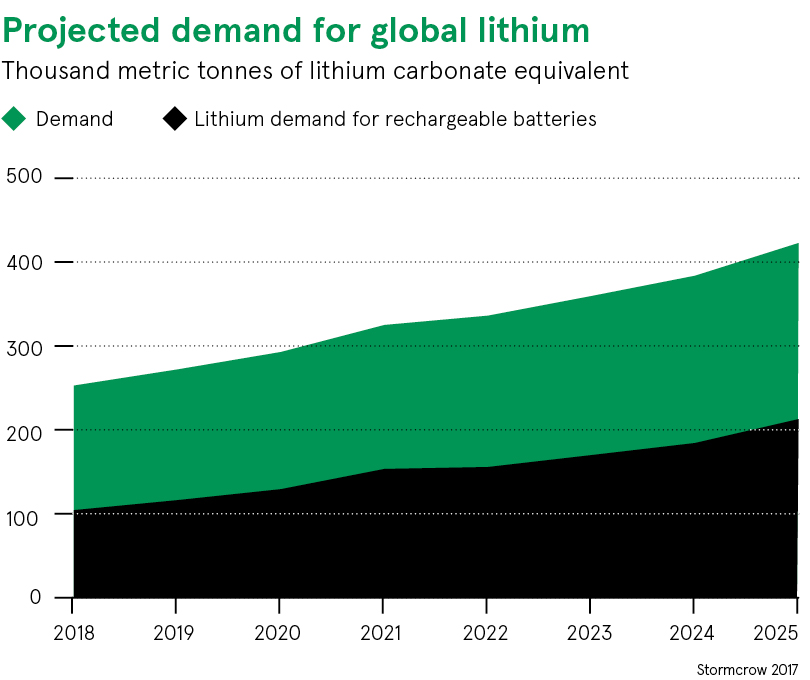 Both lithium mining and brine processing have imperfect environmental credentials. The former is energy intensive and currently heavily carbon emitting, although many miners say they plan to use more renewable energy. “In the short term, the CO2 footprint from [lithium] ‘hard rocks’ will be less than ideal,” according to David Deak of Lithium Americas.  Meanwhile, the chemicals used in brine processing can harm communities, ecosystems and food production, warns Friends of the Earth.

The supply of cobalt is also a concern, although partly because hedge funds have stockpiled the equivalent of 17 per cent of 2016 global production. Once normalised there should be sufficient supply until 2021, when new capacity will be needed to meet demand, say industry analysts. Of great concern are the environmental and humanitarian impacts of small unregulated mining operations in the Democratic Republic of Congo (DRC), home to more than half of the world’s supplies of the metal.

“Our initial investigations found that cobalt mined by children and adults in horrendous conditions in the DRC is entering the supply chains of some of the world’s biggest brands,” says Seema Joshi, head of business and human rights at Amnesty International. Apple, HP and Samsung, among others, are engaged in an effort to shed more light on the cobalt supply chain, but it is fiendishly complex and opaque.

Nickel mining also has a poor environmental record. Epidemiological studies of workers employed in the production show an association between exposure to nickel compounds and lung and nasal cancer.

To help reduce these and other environmental and human costs, initiatives such as battery recycling will need to become an integral part of the industry. It is clear that further regulation and better battery technology will be needed to rid this clean technology of its dirty side.