At the very edge of the Zaatari refugee camp in Jordan’s northern desert, a group of girls dribbles footballs between plastic cones. The late summer heat is fierce, and from time to time the wind picks up a flurry of dust and whips it viciously across the training ground. On the next pitch along, the boys have just finished school and are arriving one by one to start their practice.

“The girls walk,” Carine N’koue, who oversees the training project, says with a laugh. “The boys have the bikes.”

Behind the fence, a knot of soldiers sit in the shade of a Humvee, its machine gun trained out to the empty sand, a reminder of just how close the camp is to the Syrian border and the war beyond. Nearly 80,000 people now live in Zaatari, which is an ever-more-permanent-looking town of houses, shops, schools and mosques made from shipping containers, corrugated metal and wood.

Each week, 5,000 children come through the scheme, which is overseen by 40 coaches – 20 men, 20 women – all sourced from within the camp and trained by an instructor from Europe. The project, run by the UEFA Foundation for Children and the Asian Football Development Programme, is an initiative headed by Prince Ali bin al-Hussein, the brother of King Abdullah II of Jordan.

A softly spoken former soldier who regularly flies himself to meetings in a Black Hawk helicopter, Prince Ali sees sport – and particularly
women’s sport – as a way to bind the country’s youth together, building a new, more-positive narrative for the nation and the region, and to change social attitudes on gender equality.

During five years as vice-president of football’s governing body, FIFA, Prince Ali was a persistent thorn in the side of Sepp Blatter, the organisation’s now deposed president. When the institution became ensnared in a corruption scandal in 2015, the prince ran against Blatter, in the knowledge that he would probably lose. His aim was to make a point – FIFA needed to reform and shake off its obsession with big money and marketing.

“I had no other option. It wasn’t as though I wanted to be president of FIFA. But nobody else was willing to step up,” he says.

When Blatter stepped down a month after winning his re-election, Prince Ali stood again to replace him. He lost, and has made no secret that he sees the new president, Gianni Infantino, as a continuation of the Blatter regime.

After more than a year out of FIFA, Prince Ali is still battling for reform of the game as head of the West Asian Football Federation and the Jordan Football Association. He is adamant, he says, that even infected as it is by huge quantities of cash and tarnished by repeated scandals, football can still be a unifying force in turbulent times and a catalyst for social change. Which is why, in October, under Prince Ali’s leadership, the JFA went all out to host what is, in the global sense, a minor tournament on the international calendar – the U-17 Women’s World Cup.

Jordan is an oasis of stability in a region beset by violence, and a relatively moderate and tolerant country that is trying to fight a rearguard action against religious extremism. It faces many of the social pressures that metastasised into insurgencies in its neighbours.

The kingdom has struggled to create jobs for its young population; 70 per cent of Jordanians are under 35, and their prospects are limited by an economic crisis, precipitated by the closure of the borders with Iraq and Syria – both major trading partners – and a fall in tourist numbers. A huge influx of refugees, more than 1.5 million from Syria alone, has strained social services and water resources. Government spending shot up nearly 40 per cent between 2010 and 2014, and the country had to borrow to cover the shortfall. Since the start of the Syrian civil war in 2011, Jordan’s public debt has increased to 90 per cent of its GDP.

Hosting an international football tournament is not cheap or straightforward. Stadiums needed upgrading, infrastructure needed to be rehabilitated; more than that, holding a women’s event is not uncontroversial for the region. Prince Ali says that the logistics and the cost were worth it to very publicly restate the country’s values.

For me, this is not a sports event. This is a political event. It’s a social event

“We have always been an open country. We’ve had our challenges along the way, as have countries all over the world. But… it is good to see a reminder of what we are.”

The kingdom’s garrulous new minister of youth and sport, Rami Alwriekat, goes further. “On our borders, we have people who want to attract youth to extremism,” he says.

Jordan played their final group game – they lost all of their matches – at the Prince Mohammed International Stadium in Zarqa, the town that gave its name to the Jordanian militant Abu Musab al-Zarqawi, a key figure in the establishment of Al Qaeda in Iraq in the early 2000s. Alwriekat says this is not an inconsequential detail.

“For me, this is not a sports event. This is a political event. It’s a social event,” he says. “To have ladies wearing shorts in this region… Our national team didn’t score many goals, but I’m proud that we could host this event, with this turmoil around us. We’re sending a message.”

His colleague, the minister of tourism and antiquities Lina Mazhar Annab, says that the message is also aimed at bringing back those visitors deterred by what she says is a false perception of risk. “We are focusing on sport and we are focusing on culture and entertainment, because countries that are going through turmoil would not be holding football tournaments or cultural events,” she says. 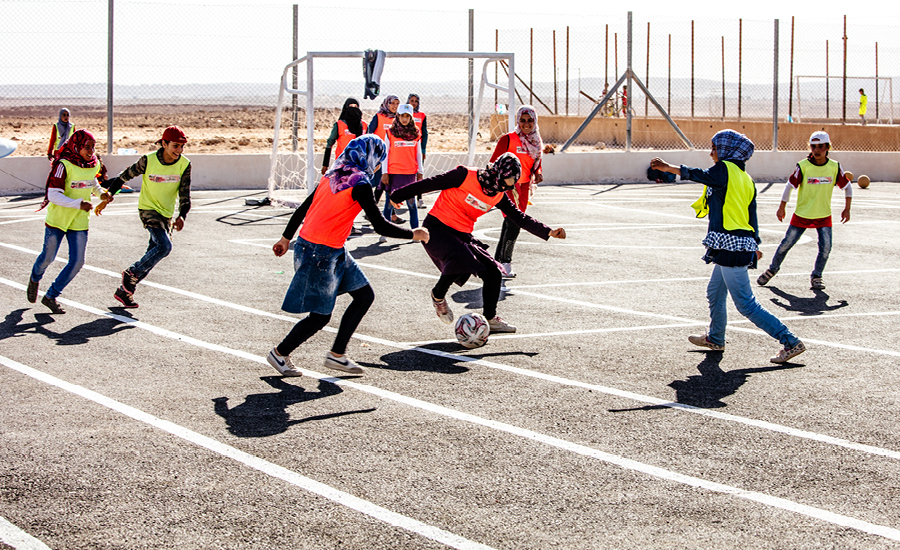 Girls playing football at the very edge of a refugee camp

The task of bidding for and organising the tournament fell to Samar Nassar, a two-time Olympic swimmer and the head of Jordan’s mission to the 2012 London games. That meant fixing everything up – from the quality of the pitches to the numbers on the seats and the intensity of the bulbs in the floodlights – to FIFA’s exacting standards.

“This is the first time we’ve hosted an event of this scale,” she says, in an interview at the offices of the local organising committee in Amman. “We were really learning to fly that plane while we were in the air.”

Although she admits she wasn’t always taken seriously at first, she built an operation that embodied the principles of gender equality within the organisation. Three-quarters of the organising committee staff, including all of the executive team, were female, as were many of the architects and engineers employed on the stadium upgrades.

Filling the stadiums was another challenge. Even outside of the Middle East, a women’s youth tournament is a tough sell, but after two years of heavy marketing and an appeal to patriotism, the opening ceremony played out to a crowd of nearly 15,000. Several members of the organising team separately recounted being asked by a perplexed visiting delegation from Qatar, which is hosting the 2022 World Cup, whether they had paid spectators to come.

Jordan’s opening goal – a wonderful strike by forward Sarah Abu-Sabbah – was celebrated across social media, and a video of her father’s emotional reaction in the stands went viral.

“It sounds like a cliché when they say that football is a platform for social change, but I truly believe it is,” Nassar says. “I always say that when these girls are on the pitch, they’re not just playing for themselves, they’re not just playing for their country, they’re… sending a strong message to Jordanians, and for the region, about the empowerment of women, about changing misconceptions about gender abilities and gender stereotypes.”

The women’s game in the Middle East has historically faced prejudice, not just from more conservative elements of society, but by FIFA rules, which until recently forbade players from wearing head covers on the pitch. It was a campaign by Prince Ali that finally led to it being relaxed, meaning that women who want to play while covered up were allowed to represent their countries in official World Cup events.

Ending the ban – which also prevented observant Sikh players from taking part – meant standing up to associations from countries that would prefer women not to play at all, and to those who saw the headscarf as a tool of oppression. FIFA justified the moratorium on grounds of health and safety.

Whether the message will spread more widely in the region remains to be seen. However, Nassar says, other associations have sent teams to observe Jordan’s progress.

“Of course, there’s no magic wand that brings about social change, but I really believe that the tournament was a catalyst for it. To see parents, to see people willingly come to purchase tickets to watch a women’s game, I think that’s a major victory for us as organisers.

“It might be difficult in some countries, but I think everybody’s inspired by what Jordan has done with this World Cup,” she says. “I think gradually, perception is changing.”