The first mass-produced hybrid electric vehicle, the Toyota Prius, hit the roads in 1997, but only in the last few years have sales of EVs and hybrid cars picked up. It is now unimaginable that leading car manufacturers would not have an EV or hybrid model in their offering.

Some 67, 000 plug-in cars are registered in the UK, according to Next Green Car. This is a remarkable growth from the 3,500 electric vehicles registered in 2013. But it’s been a long time coming, considering the first EV was built in 1837 by chemist Robert Davidson of Aberdeen.

So despite the technology being around for almost 200 years, why only now are we starting to see the uptake of EVs and hybrids? Climate change has dramatically moved up the political agenda. The recent global climate change summit COP21 witnessed the largest gathering of world leaders in history, including the Prince of Wales, prime minister David Cameron and US President Barack Obama.

The aim was to achieve a legally binding and universal agreement on climate concerns to keep global warming below 2C. It was a world first. Altogether 196 countries joined the Paris agreement, the first step in moving towards a zero-carbon future.

The agreement alone is not going to resolve the problem, but is a significant milestone. Transport accounts for 22 per cent of energy-related greenhouse gas emissions worldwide and emissions are increasing at a faster rate than any other sector, according to the International Energy Agency.

Detriment to our health is also evident. The World Health Organization estimates that 2.8 million premature deaths came as a result of urban air pollution from motor vehicles in 2012. Governments are realising the long-term social, health and financial implications of not acting now. 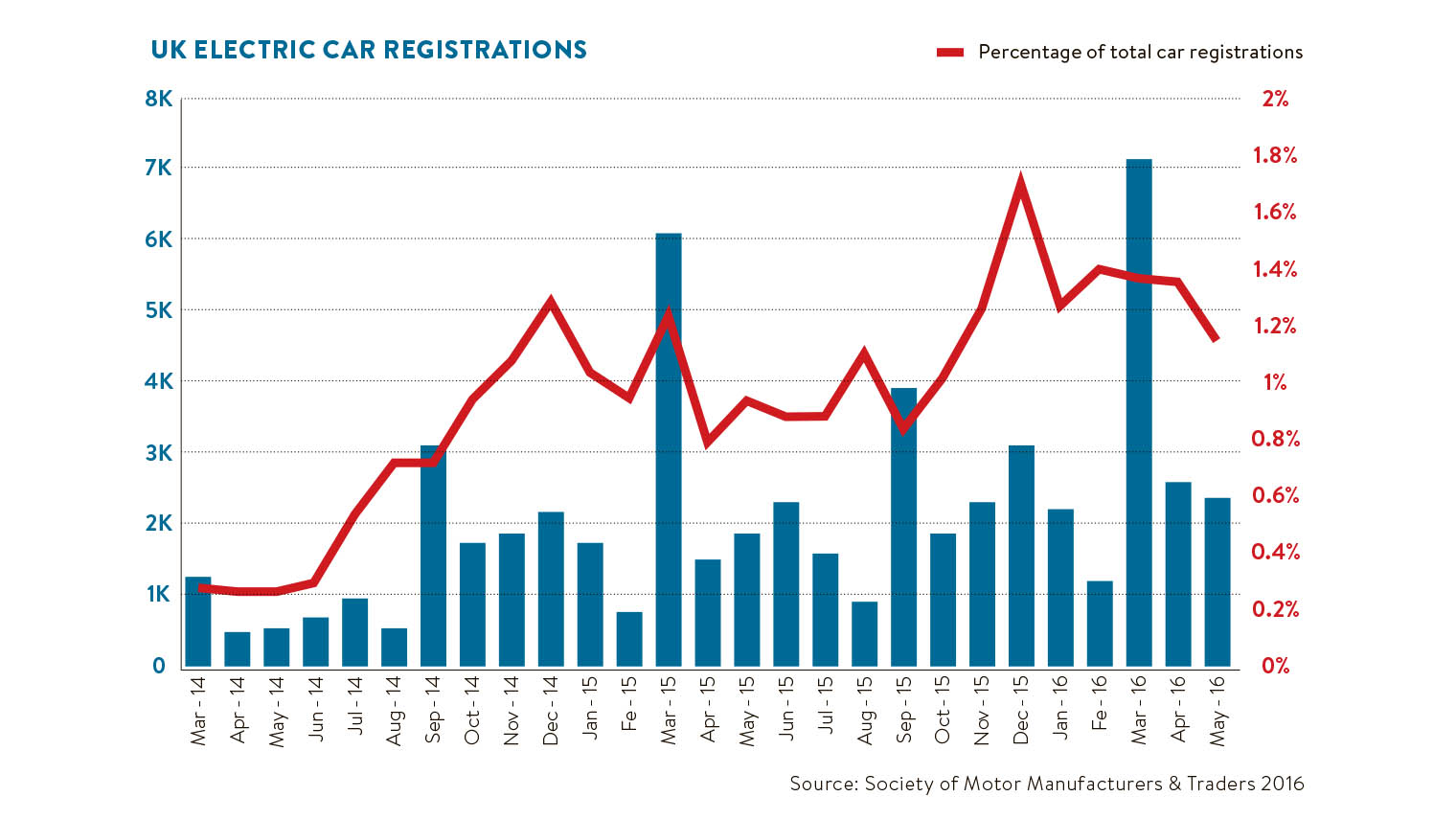 Driven by European Union directives, legislation and regulation has been drawn up to impose tough emissions targets on governments and car manufacturers causing them to focus on reducing vehicle emissions and develop EVs.

In 2014, average new car CO2 emissions (124.6g/km) beat the EU target of 130g/km by 4.2 per cent. By 2020, 95 per cent of all new cars sold must emit an average of 95g/km CO2, which means car manufacturers still have a long way to go before their cars will meet required standards. EVs offer an obvious long-term solution as emissions targets will inevitably be tightened further still in the future.

From 2021, hefty fines will be imposed on those makers that do not comply or exceed the average emission for new cars produced. The fines are not to be taken lightly. For every gram exceeding the limit, a fine of €95 will be due on every car manufactured, which could amount to many millions.

The public perception of EVs has also significantly changed in the last few years. With brands such as Tesla and BMW bringing out electric and hybrid sports cars, the slow, sluggish, unattractive perception is diminishing and rightly so.

At Frankfurt Motor Show, where many of the new concept cars are showcased, a large focus was on EVs; for example, the beautiful and much anticipated Porsche Mission E, a fully electric sports car, which is going into production this year. It’s predicted to have a range of 311 miles, rapid charging reaching 80 per cent of the maximum charge in under 15 minutes and to go from 0 to 62mph in 3.5 seconds. The Tesla Model S can top that with 0 to 62mph in 2.8 seconds in it’s much talked about “ludicrous mode”.

The Rimac Concept One is the world’s fastest production electric vehicle, built by Rimac Automobili, a Croatian car manufacturer founded by Mate Rimac. This fully electric supercar is astonishingly fast courtesy of the our electric motors that independently power each wheel. It generates a whopping 1,088bhp, goes from 0 to 62mph in 2.8 seconds and reaches top speeds of 189mph. A number of other electric sports cars are in development, including the Aston Martin RapidE, Audi Q6 e-tron and Tesla Model 3.

Choice has also grown with at least ten manufacturers selling EV cars. Nissan, Renault and Tesla were some of the early adopters, but BMW, Mini, Mitsubishi, Volkswagen, Smart, Citroën and Peugeot, and many other best-selling brands in the UK, all have an electric offering and the market continues to grow.

In terms of popularity and what sells the most, the Nissan Leaf, priced at around £20,230, has 11,000 registrations and the Mitsubishi Outlander PHEV plug-in hybrid, at £28,249, has sold 16,000, according to Department for Transport vehicle licensing statistics.

Apart from the obvious environmental benefits of buying an EV, there are plenty of financial incentives too. The cost per mile is estimated at 2p, compared with the average internal combustion engine of 12p. EVs are exempt from Road Tax. Servicing is capped at £94. A government grant of £4,500 is applied to the purchase price of cars and up to £9,000 for vans. Local authorities have free parking for EVs and they are exempt from the £11.50 a day Westminster congestion charge in London, for example.

Despite the initial up-front costs, with all these savings an EV can quickly look very appealing and cost effective.

The EV success story is partly due to manufacturers adopting a plug-in hybrid approach that solves the issue of battery life and range anxiety. But the EV infrastructure continues to improve with more than 10,000 public charging points across 3,800 different locations in the UK. Of these 2,200 are rapid charging points, which means your car can replenish over 80 per cent of its juice in under half an hour. Also, most service stations now supply rapid charging points.

The challenge now is to further improve EV battery technology and the nationwide charging infrastructure to accelerate the adoption of electric cars as the vehicles of the future.