Pre-deal checks should not only examine company accounts, but also programmes to comply with national and international regulation

As companies look for growth all around the world, they have increasingly focused on up-and-coming markets such as China, India, Mexico and Indonesia. This trend is unlikely to change.

Consultants Oxford Economics expect that by 2018 the value of emerging markets-related M&A transactions will be more than 50 per cent higher than in 2015. But the opportunities created by such deals also generate challenges, especially for buyers based in developed markets.

While they have to adapt themselves to evermore stringent regulation at home, governance standards in their new acquisitions may not be up to scratch. That is why the due diligence and compliance work done before the parties close a deal has become vital in M&A transactions.

The risks that companies face when they own firms in countries where corporate governance is fragile have been brought into sharp focus by the effect a human tragedy and environmental disaster in Brazil has had on a mining giant based on the other side of the world. 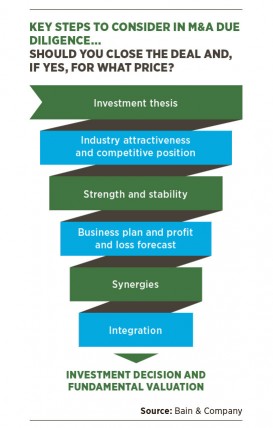 In November, two industrial waste dams managed by Samarco, an ore producer, collapsed in the town of Mariana, killing at least a dozen people and causing widespread ecological damage. In the following days, investors rushed to sell the shares of BHP Billiton, an Australian miner that co-owns the firm along with Vale, a Brazilian mining titan whose name has also been dragged into the toxic mud.

In order to avoid this kind of grief from companies they acquire, buyers need to carry out a thorough examination of their risk management and compliance procedures even before the deal is done. “Companies need to learn what kind of liabilities they are taking on,” says Michael DeFranco, the global head of M&A at Baker & McKenzie.

The aim is to avoid nasty surprises that they are liable to pay environmental fines, labour compensation agreements, late tax bills and other charges derived from mistakes or illegal acts perpetrated by the previous owners.

On a deeper level, buyers are taking a closer look at the programmes in place to deal with bribery, corruption, human rights abuses, employment of child labour by their supply chains and many other governance issues not directly linked to the commercial side of the operation. Companies based in the United States, for example, will always have in mind that they work under Foreign Corrupt Practices Act regulations, which enable US enforcers to pursue, under certain conditions, alleged breaches of American law anywhere in the world. UK companies at home and abroad, and overseas businesses operating in the UK, face similar requirements and stringent penalties under the 2010 Bribery Act.

But the preoccupation is justified not only from a legal point of view, as a strong element of reputational risk also comes into play. “Buyers have in their minds episodes such as the Volkswagen emissions scandal,” says Matthew Townsend, a corporate partner at law firm Allen & Overy. “In most markets, emerging or developed, there is a very clear focus from buyers on the compliance programmes of their targets.”

This is not an easy task by any stretch of the imagination. Especially in emerging economies, checking a compliance programme is a laborious and time-consuming task that can face many hurdles. “Compliance and due diligence is often constrained by the timetable of the deal, the costs involved and a lack of robust data from the seller,” Mr Townsend points out. But companies are ever keener to take the necessary steps in order to avoid problems. “If the compliance issue is big enough, it will make or break a deal,” he says.

The assessment of compliance programmes may look, for example, at characteristics that could be seen as competitive advantages in some markets, but appear toxic for buyers based abroad. “If it is clear that a target has close links with the government, generally that will be a red flag,” says Mr Townsend. “Financial investors, in particular, will be much more worried about that. Likewise, when a business has a large number of government-related contracts, it will trigger a close look at the interplay between the company and public officials.” 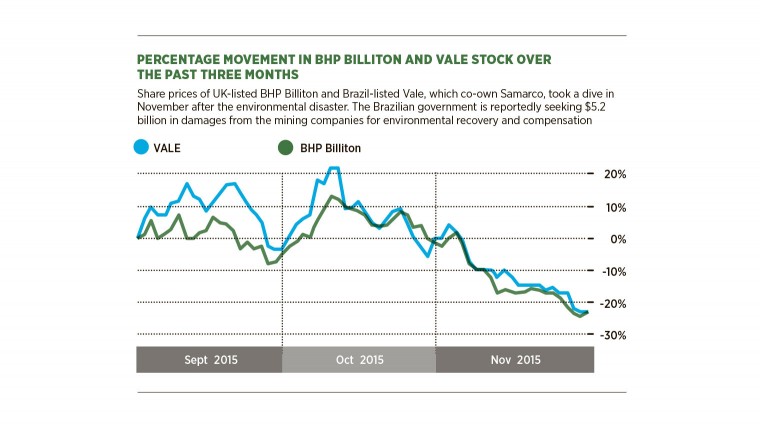 That is why sellers, who really wish to close deals, must be prepared to answer all kinds of tricky questions and be fully informed about the compliance programmes their companies have in place. Not least because it’s not only buyers who need to be convinced.

The banks that will provide funds required to complete the operation are finding themselves evermore exposed to third-party compliance breaches and, consequently, are developing a sharp eye for compliance risks. Mr Townsend says concern with such themes is higher than ever before and that compliance ranks among the top three most important issues in most M&A deals.

The pre-deal due diligence process implies assessing the exposure of the target company to anti-trust laws, data protection and privacy rules, litigation, intellectual property breaches, product liability, and so on. It also has a commercial aspect that can help in making sure the target company has the potential to deliver the business enhancements the buyer is looking for. 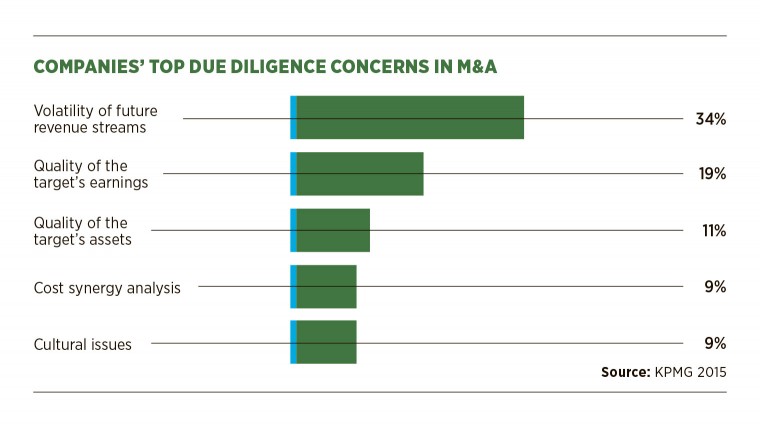 “In terms of commercial due diligence, there is much focus today on value creation plans,” says Alberto Fumo, global head of M&A at A.T. Kearney. “The fact that a lot of private equity firms have been influencing the M&A world, both as acquirers and sellers, is fuelling this kind of approach.”

At the same time, if the merger or acquisition is driven by potential synergies, the due diligence process can help participants to understand them in detail, as well as how they are going to be captured, even before the deal is completed.

Finally, it can also include an evaluation of the extent to which the company to be aggregated to the business risks been overwhelmed by an Uber-like rival that can change the perspectives of the market with a revolutionary business plan. “Clients are increasingly asking to analyse whether technological disruption can affect the sector where the target company operates,” Mr Fumo points out.