A couple of things happened in the year 2000 that made many chief executives realise they needed somebody on the board who understood information technology.

Firstly they survived the “Millennium bug”, which had threatened to destroy any computers whose date ranges were still set exclusively in the 20th century. It had triggered an enormous expenditure on IT upgrades. Secondly, an enormous overpricing of technology stocks – the dot.com bubble – had burst. Knowing whether or not tech would do something was very important and that stock rose as technology became evermore vital.

The changing role of the CIO

According to The BT CIO report 2016 – the digital CIO, 72 per cent of respondents thought the chief information officer or CIO’s standing in the boardroom had improved over the last two years, up from 59 per cent in 2014. Providing a bridge between the demands of the business and support capacity of technology has been an increasingly important role since the turn of the millennium. 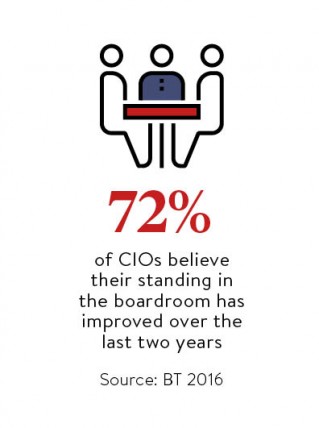 Back then businesses were beholden to the large technology firms that licensed mainframes, databases and software applications to them. They had to own the datacentres they used. Measuring the return on IT investment was difficult. The position of CIO helped to manage and explain technology to the rest of the business.

Firms largely began to recruit CIOs from the ranks of IT directors. Taking control of the technology that firms used and built required an understanding not only of the technology, but of the business itself. However, as technology evolved the role evolved.

“Over the last ten years the role has changed in a number of ways, but the greatest dynamic has been the sheer pace at which technology has changed,” says Claire-Louise McSherry, managing director of specialist executive search firm McSherry Brown. “If you look at the impact of cloud technology, at bring-your-own-device, at software-as-a-service, the effect on organisations has been considerable.”

The responsibility of CIOs has increased with their profile. After Target, the US retailing giant, had 70 million customer records hacked in 2013, it was Beth Jacob, its CIO, who was first in the firing line and resigned, followed two months later by the firm’s chief executive and chairman Gregg Steinhafel. Holding senior executives to account for the loss of information creates a clear line of responsibility for a firm’s technology and the technology-associated element of business.

Technology as a service

Where IT was once expensive and desk based, it is increasingly mobile and relatively cheap. The barriers to access have fallen and computing power can be hired on-demand. Now consumers and workers are setting the pace of change for businesses. The ability to control IT risk is consequently less about ownership of technology, and more about instilling trust and a culture that optimises technology provision, use and security within a firm.

“Consuming technology as a service has altered the way we have to think about it, from the point where we would have been asking who we needed to design and build technology,” says Michael Cooper, chief technology officer at financial communication network BT Radianz.

Virtualising computer processing – the ability to access a third-party datacentre’s processing power – means that businesses can scale their operations up and down using the cloud without incurring any fixed costs.

The way technology is developed has also changed with the historical model of taking a specification and returning a completed platform in 12 to 18 months replaced by an agile methodology, which sees a system tested against requirements during the development process to ensure it is functional in the way requested.

As consumer access to well-designed, powerful technology has increased, it has pushed firms to meet the demand for real-time, always-on services. Many industries have developed with technology built in the 1970s or earlier, often processing information in batches and therefore able to update only once or twice a day. The digitisation of business, moving it to a mobile, 24/7, real-time model designed to serve customer needs, therefore clashes with the legacy technology businesses rely upon.

Yet firms are becoming reliant upon their capacity to manage data in order to guide the business. The impact of a CIO, who understands how technology can create growth, is considerable. As business becomes increasingly digital, every action and interaction can be recorded, quantified and analysed.

Protecting that data is crucial, but as firms such as Amazon and Google have demonstrated, customers and employees can really benefit from it when it is used well.

“The CIOs we have been looking at over the last 18 months have a greater focus on cyber and security as a key mandate,” adds Ms McSherry.

Increasingly the CIO is supported by, or merged with, the roles of chief technology, chief digital and chief information security officers, reflecting the changing dynamics of the position. The CIO’s importance is expanding in line with the importance and ubiquity of technology in our lives.