It seems like only yesterday that the environment for British supermarkets was calm and benign like the surface of a deep, undisturbed lake. A small number of reassuringly familiar businesses dominated everything and, if one of these big names got into trouble, through an ill-judged acquisition or some other glaring error, then no matter, one of the others would pick up where they left off.

Consumer trends helped enormously because they were so perishingly predictable. Once a week people across the country would drive out to one of the thousands of giant, monolithic mega-marts, cram the boot with 20 full-to-bursting plastic bags and then repeat 52 times a year.

Like dinosaurs after the asteroid strike, the big, lumbering corporations had no time to react and are fighting for their futures

Everything was plain sailing, so most business plans read simply: “Do more of the same.” The businesses acquired hectares of land for ambitious construction projects, diversified with new offerings in fuel, communications and TV, and watched the cash roll in, in great big bundles.

People didn’t switch supermarkets very often, but to make sure they stayed onside, a bewildering array of bonuses, offers and discounts were slapped on almost every product in-store. No one really knew if they were getting a bargain or not, but it was enough just to see struck-through prices on the labels.

Then, just a few years ago, came an extinction event. Like dinosaurs after the asteroid strike, the big, lumbering corporations had no time to react and today even the previously invulnerable big four of Asda, Tesco, Sainsbury’s and Morrisons are fighting for their futures. 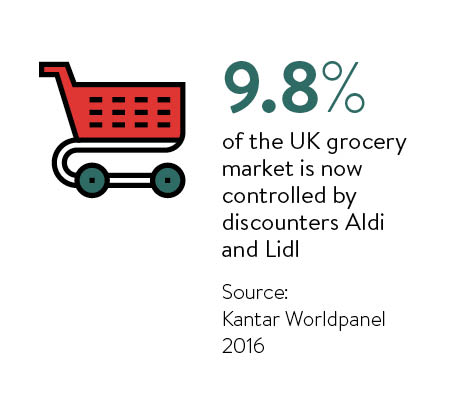 The event was actually a series of happenings that started in the 1990s with the arrival of discount stores Aldi and Lidl, whose simple, no-nonsense and transparent offering gradually gained popularity. Next came the digital revolution, which in turn had a seismic impact on the way people shop.

Demographic movements, nudged along by rising house prices, meant people started to live differently – smaller, more individual, piecemeal and spontaneous than ever before. For many, the weekly shop went out the window and was replaced with buying “just in time”.

In this new environment the discounters thrived. Pound shops proliferated and “newcomers” Aldi and Lidl began an unchallenged land grab. By 2003 the pair had inched to 2.5 per cent market share, nine years later that figure doubled to 5 per cent and it took just another three years for it to double again.

Last year a tenth of all supermarket sales happened in one or other of these stores, about the same as in Morrisons the smallest of the big four. And while these enjoy growth of eye-watering proportions – 16.5 per cent for Aldi and 19 per cent for Lidl in the third quarter of 2015 – Tesco and Morrisons watched sales fall. Of the giants, only Sainsbury’s increased turnover last year.

But sales from other players such as Waitrose and the Co-operative also edged up, suggesting that the big four got it wrong somewhere along the line.

“This allowed new, nimble entrants, particularly as the economic slowdown rolled into its fourth, fifth and sixth years, to recognise that a new smarter, more connected customer had arrived; one who understood how BOGOFs [buy one, get one free], discounts and gondola ends [promotional end-shelving] were duping them. 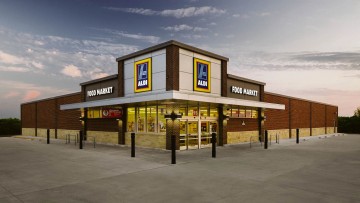 “They zoned in on what mattered to these shoppers – quality, price and convenience. Small-format, limited-line discounters popped up next to larger Waitrose stores. And both benefitted. Meanwhile three of the big four chased after ‘convenience’ using their out-of-town, out-of-favour mega stores to create dotcom delivery models.”

The discounters proved the apparent paradox that “less choice is better choice” by offering lobster for £5, adds Mr Phillips. They questioned, very reasonably, why consumers should pick from a dozen brands of jam or even why the stock should be the same each week.

The triumvirate threats of online, consumer trends and competition from nimbler foes have forced the big chains into action. Radically altering a monster business such as Tesco, still with 28 per cent of the market and a galaxy of outlets up and down the country, obviously takes time. The same is essentially true of the other major players, yet all have shown willing to initiate change.

“Asda has tried to compete head on with discounters on price,” says Paul Whysall, professor of retailing at Nottingham Business School. “They recently announced that some in-store services like photography would be stripped back or outsourced, presumably to get ‘back to basics’ as a low-cost supermarket chain.

“Sainsbury’s offer to buy Argos is interesting, suggesting it sees a future as an efficient deliverer of goods using Argos’s established expertise in that respect, but that move has divided informed opinions; there may be problems as well as opportunities there.

“Morrisons was struggling for some time before it had an apparent recent mini-revival, hence its withdrawal from convenience stores which seemed not to have worked as planned. It seems to want to return to its former proven business model, but is that still appropriate?”

Unhelpfully for supermarket royalty, the pretenders to the throne have been agitating all the while. They are evolving too with new budgets for guerilla marketing, making it hard for their rivals to play them at their own game.

Disruptors shaking up the market

“Aldi and Lidl have really shaken up the market with their advertising over the last few years; cheeky campaigns, such as Aldi’s Like Brands Only Better or its recent parody of the John Lewis Christmas ad, stand out and get their price message across very effectively,” argues Dan Smith, head of the advertising and marketing law team at Gowling WLG (UK).

“The big four have sometimes found it difficult to respond. Their price guarantees typically exclude Aldi and Lidl, and attempts to find a way to include them have led to Lidl hitting back with an ad highlighting the conditions on the price match and suggesting that, instead, consumers could ‘just go to Lidl’.” 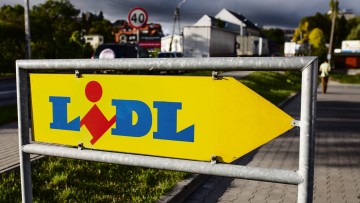 But Jon Kershaw, managing partner for strategy at Havas Media, says the establishment is managing to land a few counter-punches of its own. Asda, for example, was on the money with its offer of heavy discounts on unattractively shaped vegetables.

“Asda’s wonky veg box is a great example of a meaningful new initiative,” he says. “It offers price-conscious shoppers a cheap way to feed their families, it promotes healthy eating and it reduces food waste by getting more food on the shelves that would otherwise have been rejected.

“Across the board, supermarkets are now doing more to help time-poor shoppers. Rationalised product ranges, smaller and more easily navigable store formats, and technology initiatives like Tesco’s Scan As You Shop are all signs that the big four are listening to feedback.”

The war for your shopping basket is hotting up, yet such is the complexity of what’s taking place, we won’t see a winner for years to come. The good news for those of us who do not work in retail, however, is that the customer looks well placed to come out on top, whatever the outcome.

MILESTONE YEAR AHEAD FOR MORRISONS

The recent history of Morrisons is a rollercoaster ride of highs and lows. Over ten years it swept south from its northern heartland, opened dozens of branches, thrived in its position as a challenger to its three bigger rivals, but then shrank back as failure to adapt to new market conditions cost the chain dear.

Morrisons delivered a much-needed turnaround in sales in the latest Christmas period, posting a wafer thin 0.2 per cent rise in like-for-like sales during the nine weeks to January 3, but other than that 2015 was a year to forget.

A foray into the convenience store market ended with a huge sell-off of 140 outlets at the bargain-basement price of £25 million, an estimated £30 million less than it cost to develop. The stores had operating losses of £36 million.

The wider company’s profits almost halved last year from 12 months earlier as it consolidated and reined in its less successful investments. A late venture into online deliveries began in January 2014; by contrast Waitrose started its home deliveries through Ocado in 2000.

The then chief executive of Morrisons Dalton Philips had been quoted as saying, quite rightly in many cases, that web-based shopping was not profitable. These troubles and more were compounded by falling food prices which ate into already tight profits.

Although 2015 was a broadly painful year for the business, it did represent the culmination of some significant changes which could put the business back on track. It slashed prices to compete head-on with Aldi and in November dropped its money-off voucher scheme.

It changed its Match & More loyalty programme – also criticised for being behind the times – to give five points for every £1 spent and it stopped the promotion of rewarding points if shoppers found goods cheaper elsewhere.

In a back-to-basics message, the chain has ended its association with celebrities Ant & Dec for its adverts and beefed up the message that the business is more than just retail. Unlike other chains it owns its own bakeries, fisheries and abattoirs.

This year will be a milestone for Morrisons and analysts are waiting to see if the changes will yield results. Watch this space.