Whether it’s Brexit or artificial intelligence, big data or constantly evolving regulation, the future looks increasingly uncertain for all sectors. For smaller charities focusing on unmet needs that are looking to increase or simply maintain income, as well as retaining talent and promoting awareness to audiences that are bombarded with information, the future can appear particularly daunting. Corporate sponsorships and connections are therefore becoming increasingly sought after.

According to a survey of smaller charities published in late-2017 by the Garfield Weston Foundation, only 39 per cent of those asked felt that their staff and volunteers had all the skills required to prosper in the next five years, while 77 per cent had no plan for dealing with a surge in demand for services.

Small charities often lack expertise in building capacity and other business challenges, the foundation notes. So, along with its grants programmes, it has launched a strategic initiative to build skill and capability with a number of partners, including Pilotlight, the Cranfield Trust, the Media Trust and others, to connect charities with business leaders who provide essential support with strategic planning.

“Sustainable funding is the greatest challenge by far and we do not have the reserves of many larger charities,” says Ava Easton, chief executive of Encephalitis. “That means we do not have the resources to deliver huge campaigns, so persuading people to support us, using the personalised approach that works best for us, is time consuming. Some 97 per cent of charities are small and we are the ones that do most of the support, yet the 3 per cent of larger charities is where the public focus is and where the decisions are made.”

However, being the only charity focusing on a particular medical condition can have its advantages as well as its challenges. “We deal with a unique condition, and we are the only resource of our kind in the world delivering direct support, raising global awareness and participating in research, so we’re unique too,” says Dr Easton.

Collaboration between charities and businesses key to future success

Awards such as the Charity Times Charity of the Year with an income of under £1 million have raised its profile and helped the charity to position itself as a provider of spokespeople. Consulting on scripts for a recent storyline in the Channel 4 soap Hollyoaks will lead to new opportunities, Dr Easton believes.

Aisling Burnand, chief executive of the Association of Medical Research Charities, sees collaboration with other charities and businesses as key to future success. “Smaller charities have the ability to be more agile and make the most of opportunities in areas such as digital health,” she says. “They can be really creative in the way they work with businesses and each other.”

The possibility of treatments entering human clinical trial stage for epidermolysis bullosa (EB), a group of genetic skin conditions which cause the skin to blister and tear at the slightest touch, points to a brighter future for DEBRA, a charity that focuses on the condition.

“Now there are opportunities for us to fund small-scale clinical trials which bridge the gap between laboratory understanding of the condition and investment in large-scale trials from big pharmaceutical companies that have the potential to bring effective therapies to market,” says chief executive Ben Merret.  “Over the next few years, we also anticipate that our partnership with the NHS will continue to develop and grow, enhancing the healthcare available to people suffering from EB, and making a real difference to the quality of life here and now.” 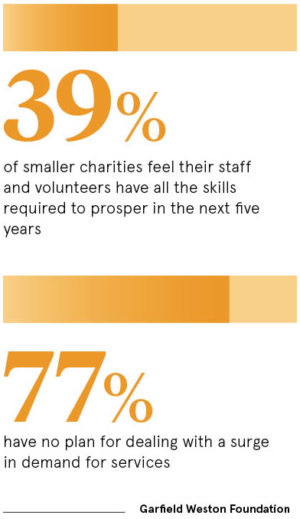 Online charitable donation providers could be a game-changer

For NMO SPECTRUM-UK, which supports sufferers of neuromyelitis optica (NMO) and works towards a cure for what is also known as Devic’s disease, an autoimmune condition characterised by inflammation of the optic nerves and spinal cord, increased compliance such as the General Data Protection Regulation is a growing challenge. “Large charities have admin staff who can handle this regulation, but the smaller ones simply don’t,” says chief executive Anthony Hughes-McCann.

However, he views the growth of online charitable donation providers, such as JustGiving and store cards that enable donations, as positive developments for smaller charities. Mr Hughes-McCann also believes that the Charity Commission should consider differentiating between small charities and what he calls “worthy causes”, in other words small campaigns and one-off events.

Increasing trend for businesses wanting to engage with charities

Corporate support is key to the successful future of many smaller charities. “Corporate social responsibility (CSR) is increasingly prominent and important across all sectors – consumers are actively choosing to buy and obtain services from companies with CSR policies and programmes,” adds Mr Merret. “DEBRA is actively working with companies to help fulfil their CSR policies.”

Partner charities of the Garfield Weston Foundation are reporting an increasing trend for businesses wanting to engage more with the charities they support. Employees might provide skills and advice rather than, for example, a group day out to paint a building or redevelop a garden, something that smaller charities can increasingly benefit from.

Philippa Charles, the foundation’s director, concludes: “This is a positive development as it can also lead to individual giving as well as the charity being able to access skills and experience that they wouldn’t be able to afford otherwise – charities that embrace this may find some great relationships developing.”