Our delight in chocolate comes at great cost to those who produce the cocoa, notably child labourers in West Africa 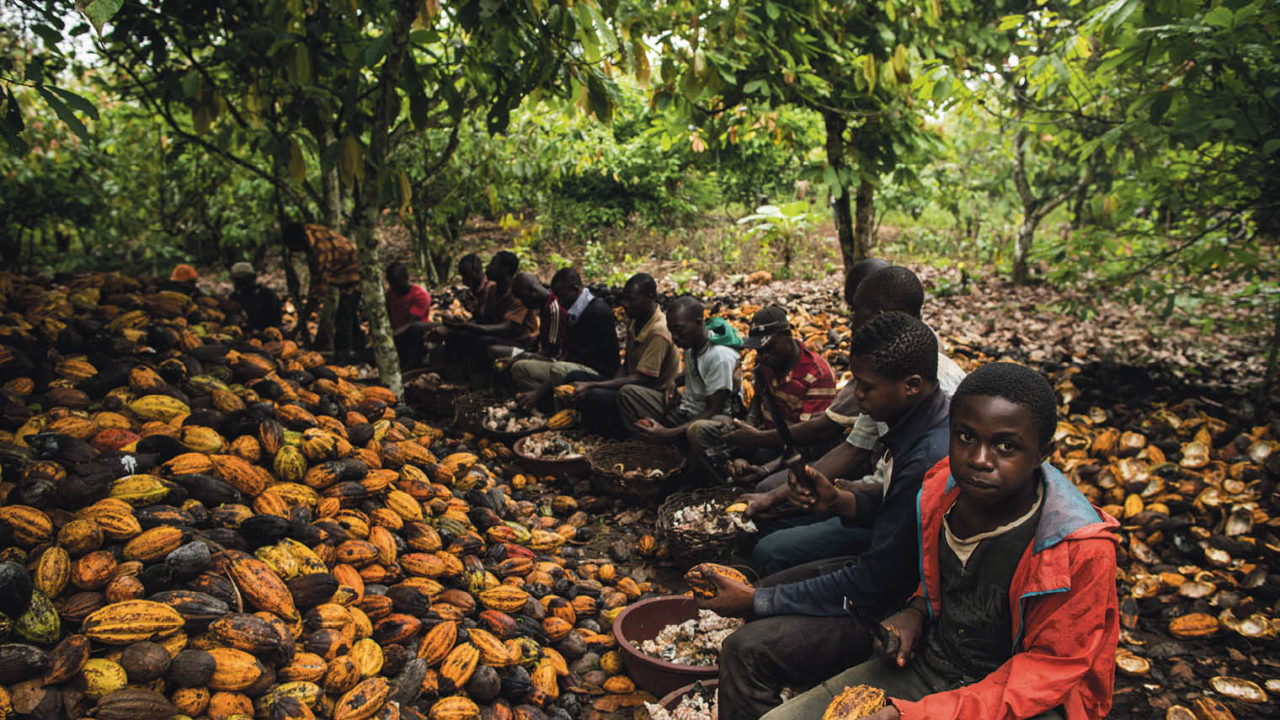 Chocolate is, for most of us, a guilty pleasure. We know we probably shouldn’t but, hey, it’s been a long day. Yet for thousands of children in the cocoa fields of West Africa, chocolate is a source not of pleasure but of hard, sometimes hazardous, work. The link between child labour and chocolate production is, lamentably, a long-standing one. Reports of under-age minors being made to work in Côte d’Ivoire, Ghana and other cocoa-producing countries date back two decades or more. According to the 2018 Cocoa Barometer, a report by 15 European non-profit organisations, as many as 2.1 million child labourers are working in West Africa alone.

So why does the problem persist? And what, in particular, can the big cocoa buyers and the chocolate manufacturers do to prevent it?

Poverty: the chief cause of child slave labour

The answer to the first question is simple: poverty. Already poor, smallholder farmers have been hit by a slump in global prices over the last few years. On average, cocoa-growing households earn $0.78 a day, less than one third of what the Fairtrade International defines as a living income of $2.51.

“Until we address the poverty issue and raise farmers out of poverty, then this will continue to be a problem,” says Timothy McCoy, vice president of the World Cocoa Foundation, an industry-backed membership body.

It’s not just about price at the farm gate, says McCoy. Plots are often too small, plants too old and agricultural methods too dated to make cocoa farming profitable. His view for the future is phlegmatic: “If there was an easy solution to this, then we would have solved it a long time ago and moved on.” 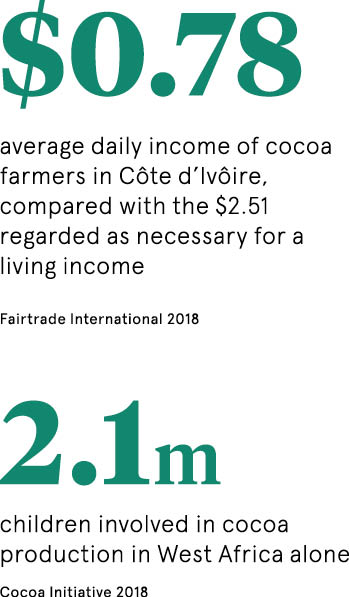 If that sounds like defeatism, it’s not. The last decade and more has seen a wide array of initiatives by businesses, governments and charities to combat child labour problems in cocoa-producing countries, from building schools to training farmers in more efficient growing methods.

Trying to provide a semblance of order to all these efforts is the Geneva-based International Cocoa Initiative (ICI). This multi-sector organisation, which counts the likes of Mars, Hershey’s and Ferrero among its members, was set up in 2012 with an explicit mandate to eliminate child labour.

One of ICI’s main strategies to date has been the establishment of monitoring and remediation systems, as laid out in a framework known as the Harkin-Engel Protocol. It’s painstaking work, however. Currently, only 127 such farmer groups and co-operatives in Côte d’Ivoire and Ghana are covered. It’s a not insignificant number, but still only a fraction of the estimated two million cocoa farmers in the two countries.

Transparency in chocolate production is key to tackling child labour

Even so, Nick Weatherill, executive director at ICI, is “reasonably bullish” about progress. “These systems, when worked into companies’ supply chains, allow them to identify child labour and, having identified it, to address it.”

His comment flags up a theme of transparency, a topic that underlies many contemporary discussions about child labour. If commercial buyers knew more about the working practices on individual farms in cocoa-producing countries, transparency proponents argue, then they would cut out egregious operators and procure only from ethical farms.

This logic has spawned a huge certification industry over recent years. Almost every standard includes the prohibition of child labour as a core requirement. In reality, however, it remains impossible for external auditors to provide a 100 per cent guarantee that a certified farm has zero child labour throughout the year.

So says Britta Wyss Bisang, chief sustainable supply chain officer at the Rainforest Alliance, one of the best-known certification bodies. “Cases may be hidden by group members or be moved to other, non-certified sectors or areas, meaning the problem of child labour is not solved, and a better future for the child and its family is not secured,” she says.

In response, some certifiers are expanding their work to examine the preventative mechanisms that communities have in place. For instance, UTZ, which merged with the Rainforest Alliance in January, is currently trialling an approach that requires producer groups to assess the risk of child labour on their farms, to work with the community to reduce those risks, and document efforts at remediating any cases that occur.

Putting the power in the hands of cocoa farmers

The Swiss food giant Nestlé, owner of chocolate brands such as Milkybar, Yorkie and Smarties, is experimenting with a similar strategy. Moving away from a strict compliance approach, its Child Labour Monitoring and Remediation System seeks to get cocoa farmers to self-declare instances of child labour and then take actions within the community itself to prevent it.

This more collaborative approach keeps the issue visible and stops it being buried, according to ICI’s Mr Weatherill. An initial three-year pilot with 26,000 cocoa farmers, mostly located in Côte d’Ivoire, saw the number of children carrying out hazardous tasks drop by 51 per cent, a “very positive trajectory”, he says.

Darrell High, cocoa manager at Nestlé, shares his enthusiasm, but remains sanguine at the same time. “While this has been incredibly encouraging in terms of the progress we’ve made, we know that there is still more work to do to address the pervasive issue of child labour in cocoa farming,” he says.

Scaling up the approach would certainly help. Not only does Nestlé need to expand the programme across its entire supply chain, but other buyers need to get on board as well. In the recent past, seven companies have agreed to do just that. Crucially, the list includes the global commodity traders Olam, Cargill and Ecom, which hold huge sway over the conditions in which cocoa is bought and sold. 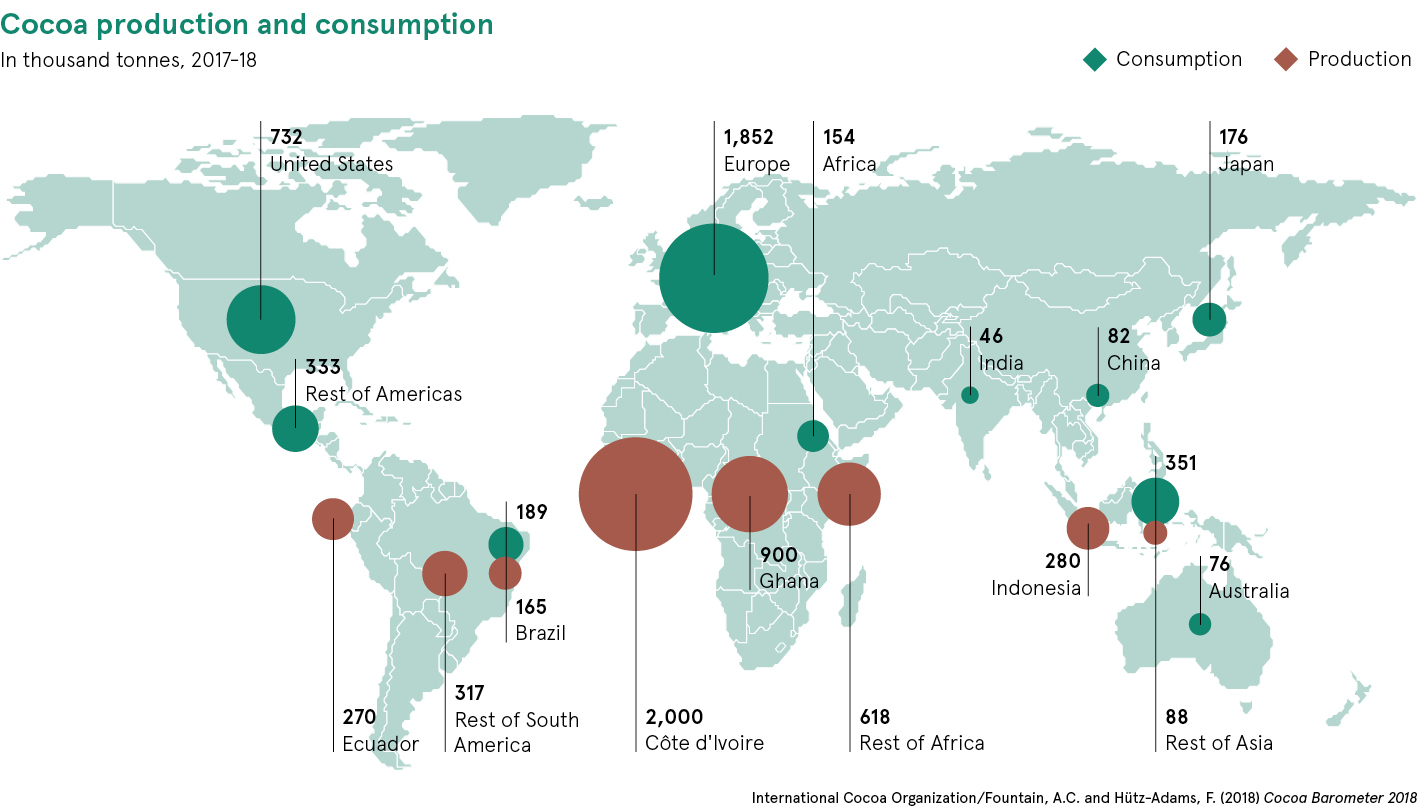 Chocolate companies that use child labour must be discouraged

At Uncommon Chocolate, a California-based cocoa buyer that supplies mostly US chocolate companies, Emily Stone would like to see the industry’s big players go even further. Not only should they pay a fair price, she says, but they should publicly declare which cocoa farms they source from and how much they pay, as Uncommon Chocolate does.

“Farmers who employ child labour on their farms don’t do it because they want to, it’s what they need to do to make ends meet,” says Ms Stone, Uncommon Chocolate’s founder and chief executive. “One of the main reasons we do transparent pricing is because we believe that paying farmers stable, fair prices for their business is the key to sustainable practices of all kinds.”

In an age of increasingly discerning consumers, the excuse that pricing is commercially sensitive no longer washes. Yes, such a step takes courage, she admits. But only with “radical honesty” will it be possible to address the root causes of child labour and bring about real change.

“All the external projects and NGO-type activities that are happening in the cocoa supply chain are good and important, but we need to address the core issue that prices are simply too low,” she argues.

The journey to slave-free chocolate

Tony’s Chocolonely has some advice to pass on as well. Set up by three journalists in response to stories of child abuse in the cocoa industry, this Netherlands-based brand claims to make 100 per cent slave-free chocolate. Its approach is to establish direct, equitable relationships with farmers, while also helping them to increase their productivity and improve their product quality.

This approach to procurement is intentionally designed for larger buyers to follow suit, says Pascal van Ham, the brand’s head of marketing. To prove her point, the ethical brand recently worked with the huge Belgian chocolate manufacturer Barry Callebaut to ensure all its cocoa purchases could be traced back to sustainable sources.

“We set up the company 15 years ago to create a different business model and a different way of co-operating with farmers that is based on equality and not maximising profits,” she says. “And if we can do it, then the question is why can’t others follow the same example?”