Mobile payments are expected to gain popularity this year, yet the move to paying with a mobile device is likely to take some time to really catch on

Researchers at Deloitte predict the proportion of mobile payments will increase by a staggering 1,100 per cent worldwide in 2015, albeit from a low base. They estimate that 5 per cent of the more than 600 million NFC-equipped (near-field communication) mobile phones globally will be used once a month this year to make a payment, up from 0.5 per cent of the 500 million used in 2014.

The trigger will be a confluence of factors. One is the migration to an improved secure payments infrastructure in the United States. While European countries began migrating to chip-and-PIN payments a decade ago in order to reduce fraud, the US maintained swipe cards. When retail giant Target announced in January 2014 that compromised swipe-card terminals had been used to steal anywhere from 70-100 million customers’ credit card details that prompted a rethink.

Paul Lee, a partner at Deloitte, says: “The US market is very influential and the big change there has been the move to chip and PIN which has been catalysed by the move to a liability shift for transaction on to retailers from October this year. That is catalysing a big upgrade of payments systems. As a result we are expecting a big adoption of NFC-enabled terminals.”

NFC payments conducted via smartphone generate a token – a unique and one-use code – that is transmitted to the merchant’s terminal. This renders the hacking of payment terminals useless to a fraudster, although during the adoption process it is likely both old and new technologies could be used, meaning some payments made using the older model could still be compromised.

Another driver for change has been the ability for smartphones to make a secure transmission of a token with Android and iPhone models launching into the market in the last 12 months that can process transactions when combined with other forms of authentication. But crucially a third driver will stem from functionality and the psychological “me too” impulse that comes from witnessing new technology being used.

“Once people can walk into a hotel, use their phone to pay for a room in a fully automated manner so the room is allocated and the phone can function as the room door key using NFC, then interest will increase,” says Mr Lee.

Relying on a device to deliver such crucial services requires trust in the early stages of adoption. Having strong brand names associated with a device, an app or a payment system can accelerate user adoption to overcome inertia due to perceived risk, for example, says Dan Salmons, managing director, mobile and online at payment specialist PayPoint.

“It is not only whether I understand the risk, it is that I don’t know how much effort it will take to understand the risk and the reward for the effort,” he says. “We looked into this extensively with consumers at the moment of parking a car and when they do or do not choose to download a mobile payment app.”

Over a longer time period of time, the generational effects are expected to make mobile payments a more normal part of everyday life, with the younger generation using mobile devices for many tasks beyond use as a telephone.

Jonathan Vaux, executive director for new digital payments and strategy at Visa Europe, comments: “My son is 13, he had a smartphone before he had a debit card or any financial instrument and so a lot of his learnt intuitive behaviours are driven by interaction with the phone. For people of my generation, a smartphone is comparatively new technology and we have had plastic longer than we have had smartphones. Things like chip and PIN don’t feel intrusive to me.”

The common theme to successful migration is to make sure that payment is not intrusive, which varies quite dramatically depending on how the consumer is paying and on what device.

“People’s behaviour and spending on a mobile phone versus a tablet is quite different,” he says. “I am much more likely to be browsing when I am on a tablet, laptop or PC whereas phones tend to be used for more immediate purchases.”

Behaviour can change where consumers are presented with trouble-free technology and a clear incentive, such as ease of use. An example of this has been the move from swipe cards to the chip-and-PIN system and then on to contactless payment cards which have been successful in some parts of Europe including the UK.

Zilvinas Bareisis, senior analyst with Celent’s banking practice, says: “We have seen good success with contactless cards, particularly in metropolitan areas such as London, where the [contactless Oyster card] transport payments system has contributed to the success. Mobile contactless transactions are very similar to a card and consumers may well ask, ‘What does it give me that is extra?’”

If a contactless mobile payment device can use an extra layer of authentication, such as Apple Pay’s thumbprint scanner, for higher-value payments, it could well provide that extra feature, particularly, as Mr Lee’s hotel example suggests, with additional phone-based services accessible post-transaction.

However, for merchants concerned about which mobile payment scheme to join, there is a lack of certainty. Apple Pay is at present a US-only system, expected to launch in Europe later this year. It has been competing with the Walmart-led Merchant Customer Exchange (MCX), a union of US retailers offering its own mobile payment system called CurrentC, which only uses debit cards. MCX has asked merchants to sign three-year exclusivity agreements which would prevent them from also using Apple Pay.

This lack of standardisation has limited the development of mobile payments in the past as rival banks and telcos fought over ownership of transactions, customer data and relationship, and how data can be used.

Mr Vaux says: “Everyone was fighting for control – the financial institution, the handset provider, the network provider – and as a result it wasn’t the technology that was [inhibiting mobile payments], it was the commercial model.”

He likens the challenge to that faced by the music industry where big players with access to both portable music players and relationships with the artists failed to launch digital musical services that gained widespread adoption.

“Why was Apple the first?” he asks. “Success is not based on controlling the experience; it is about facilitating and enriching it.”

Change will not take place overnight, warns PayPoint’s Mr Salmons, as despite the multitude of froth blowing about on the surface of the mobile payments world, consumer adoption is a slow current deep beneath the surface.

“Consumers won’t be rushed into doing new things,” he says. “Contactless has taken quite a while to get going and with other payment innovations there will be an awful lot of noise. There is an interface of fast-moving technology and relatively slow-moving consumer behaviour.”

WALLET IN A WATCH 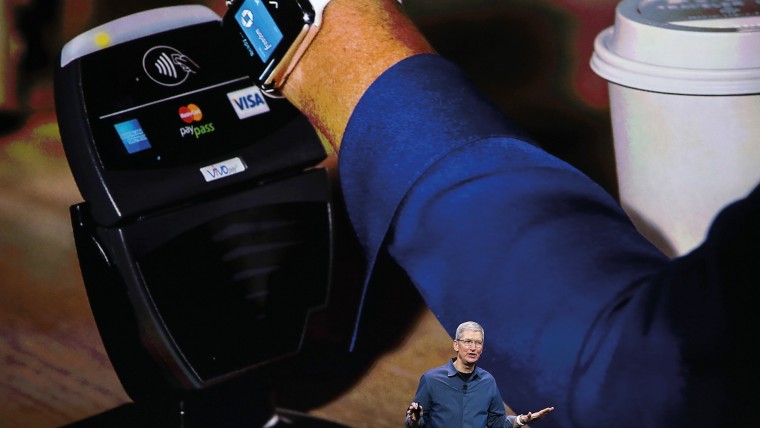 Tapping a ring or a watch against a payment terminal could replace using a bank card in future, but only if the public buys into the idea. Since payment technology moved from magnetic stripes to chips, the need for a flat card to be used as a payment device has disappeared. The range of items that could hold a payment chip is limited only by size and practicality.

The simplest devices, such as event wristbands and rings, can have prepaid functionality built into a chip, which can be used with NFC to pay for small items such as drinks.

John McLear, founder of wearable technology provider NFC Ring, says: “Wearable technology is convenient; you can go to the beach or to the gym and not have to take anything with you that you might have to leave about, such as a wallet or a phone, but you can still have a payment function.”

But for devices such as rings to replace payment cards would be difficult, says Mr McLear.

“The reissuance process would be a barrier, as you would have to charge for sending out the new ring,” he says. “However, there are firms working on reissuance models using mobile phones which could provide the ring with a new set of credentials every three years.”

Ms Smith says DigiSEq is planning to offer products in the festivals and lifestyle spaces where a controlled environment, such as a gym, creates a need for convenience within a specific range of activities.

“A member might finish running then want to get a bottle of water, but not have their phone, so specific payment devices are horses for courses,” she says.

“It is simply a countdown of how much time I have got left with the ability to tap the screen and top it up,” he says. “Simplicity is what you need on that device. So I think mobile is driving the expectation of payment as something completely integrated into whatever you are trying to do.”