Collaboration is essential to deliver a mega-project, such as London’s Nine Elms development, involving numerous agencies with varied requirements 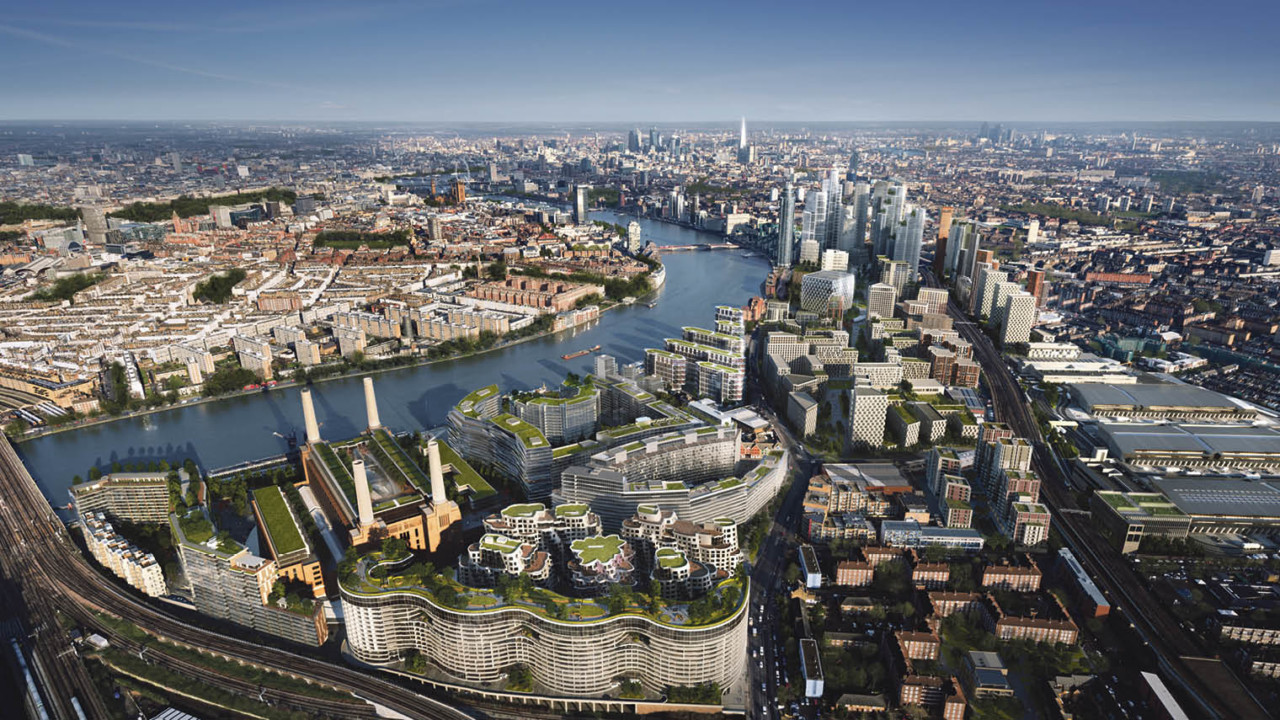 It seems a giant leap from a wasteland of vacant industrial sheds, derelict warehouses and a long-defunct, albeit iconic, power station, to the home of Apple in the UK, new US embassy with adjacent glass “sky pool” and a clutch of des-res skyscrapers, dubbed mini-Manhattan.

This, however, is the transformative effect the Nine Elms regeneration mega-project is having on an unloved stretch of London’s South Bank. Spectacular in scale, if not without controversy, the scheme might be named after a number of trees, but figures that really tell the tale are much, much bigger.

Nine Elms covers an area of 227 hectares or almost enough to accommodate 300 football pitches. With more than 42 interconnected development sites, its total value of approximately £15 billion is half as much again as the entire budget for the 2012 London Olympics.

Providing around 20,000 new homes for nearly twice that number of residents, Nine Elms will boast a population equivalent to that of a large English town, somewhere in size between Chorley, Lancashire and Ramsgate in Kent.

Regeneration will also bring investment in terms of employment, with some 25,000 new permanent positions in prospect, on top of the 22,000 construction jobs in phases through to 2022.

On multi-stakeholder, big-bucks schemes as high-profile as this, the opportunity is huge, but so too is the complexity. True partnership working is therefore key, explains councillor Ravi Govindia, co-chair of the Nine Elms Vauxhall Partnership and leader of Wandsworth Council.

“For a partnership of this scale and complexity to work, public-sector partners must have a clear vision and lasting commitment to delivering their collective ambitions,” he says. “You also have to understand what each partner needs and be flexible enough to make sure everyone shares in the growth and success.”

The Nine Elms Vauxhall Partnership was created in 2010 to co-ordinate and drive forward the transformation. Co-chaired by the leaders of Wandsworth and Lambeth councils, it includes the area’s main developers and landowners, the London mayor, Transport for London (TfL) and the Greater London Authority.

The partnership is responsible for setting and delivering the strategic vision for the area, including the £1-billion infrastructure investment package, while extension of the Northern Line from Kennington brings the lifeblood of the London Underground into the heart of the development. With construction started in 2015, the two new station stops are due to be operational by 2020.

Vital as the Tube may be in development terms, it is only one aspect of a wider mobility and infrastructure plan, which includes road and roundabout upgrades, interchange improvements, new bus routes and riverbus passenger piers.

An 11-acre linear park from Vauxhall to Battersea Power Station also provides a green corridor of car-free biodiversity, with the Thames River Path extended the full length of the area, plus a network of new cycleways and footpaths introduced.

Green infrastructure represents a critical component of the place-making and pedestrian-centred urban design, says Mak Gilchrist, founding director of landscape architecture and design consultancy The Edible Bus Stop (EBS). “Landscape and green infrastructure are key in integrating existing communities with new residents. These spaces provide an interface between old and new, encouraging vital opportunities for social cohesion,” she says. “These sites become the centre for the community, enabling social experience as they provide the ‘third space’ after the home and workplace.”

EBS was engaged on Nine Elms to transform Thessaly Road, at the perimeter of the New Covent Garden Market redevelopment. Neighbouring residents had faced a dark and unattractive boundary wall, one kilometre long and three metres tall, topped with razor wire. So, while a mural artist created a continuous white-line drawing along the wall, EBS installed sculptural white picket-fence breakouts with fold-out seating, plus sensory, edible and ornamental bee-friendly planting. 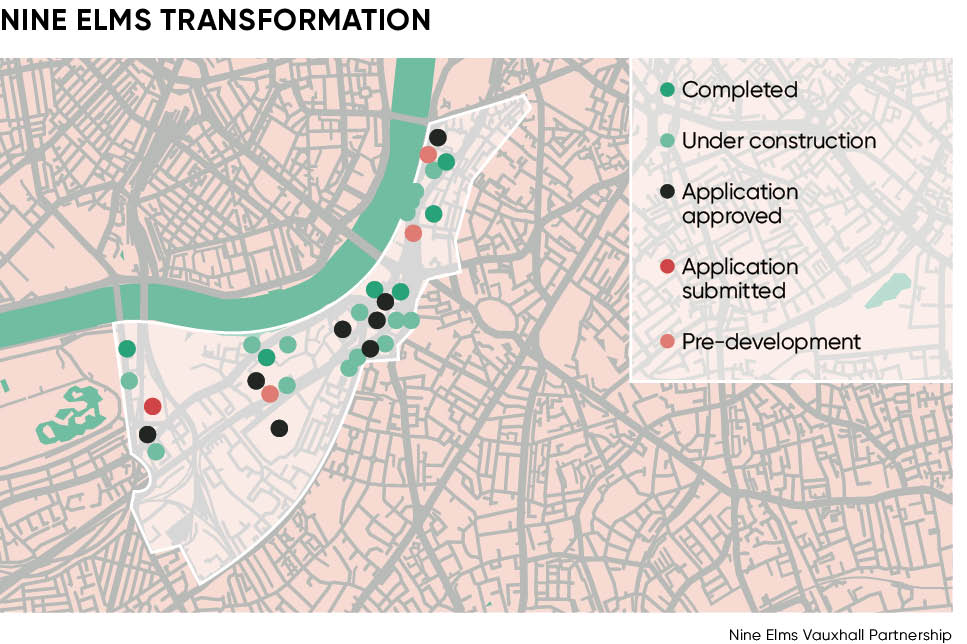 Core to the concept was the communication piece with local people, says Will Sandy, EBS creative director. “The interactive community engagements were a crucial part of the projects success, as our concept evolved through conversations with locals,” he says. “Initially, it gave us the opportunity to invite them to be part of the creative process and therefore engender a sense of ownership and pride.”

For Nine Elms Vauxhall Partnership, collective problem-solving has helped ensure momentum is maintained, as the programme devolves to local-authority level, progressing from planning and enabling, to place-making and delivery, says councillor Govindia.

“Co-ordination across different sites and agencies is a key challenge in a fast-moving development area,” he says. “As an example, a number of landowners formed a company to provide a single entity which engages with utility companies, so power, drainage and district heating networks could be planned strategically.”

Some of the individual developments constitute mixed-use, multi-stakeholder projects in themselves, bringing their own basket of complexities to the management table. A prime example would be Nine Elms Point, a Barratt London apartment scheme, incorporating a flagship Sainsbury’s retail store and adjacent to one of the new stations being built. The project team were also involved on the master district heating network.

Overall, taking a collaborative approach to design and site-management issues has proved vital to delivering sustainable solutions, says Sam Sinniah, project director at Barratt London: “Nine Elms Point is a bespoke product and was one of the first schemes in the Vauxhall, Nine Elms, Battersea Opportunity Area. We have worked closely with our immediate neighbours, Covent Garden Market Authority and TfL, to co-ordinate construction techniques and ensure the most suitable material choices for the public realm. This included the co-ordinated masterplan with the piazza leading up to the market,” he says.

In a bid to foster ongoing team-working, key development partners on Nine Elms signed a special construction charter in March 2014, marking their commitment to work collaboratively to deliver a beacon of best practice.

The charter is based on the approach pioneered by the Considerate Constructors Scheme (CCS), but with an enhanced focus on developers and highways authorities actively working together, which is essential given the complex logistics associated with the redevelopment of the new district.

The advantages have been clear for both the respective partners and the image of the construction sector as a whole, says CCS chief executive Edward Hardy. “The construction charter has proved hugely valuable in improving considerate working standards on site, with those involved performing well above the industry average,” he says. “The charter demonstrates the huge benefits that can be achieved for the local communities, workforce and environment through working collaboratively.”

His sentiments are echoed strongly by councillor Govindia. “Once partners see the benefits of collaboration, there is a clear willingness to communicate. That said, dedicated staff on the ground and points of contact are essential to ensure efficient and timely communication. This has proved valuable in our area-wide arts and culture programme, logistics and joined-up construction training initiatives, which have seen hundreds of local people start work on Nine Elms sites,” he says.

Nine Elms is unique and its complexity a real challenge for project management. In essence, though, many of the solutions appear founded on simple truths common to joint enterprises, big and small, that it pays to collaborate and communicate.

Typical pressures involved in managing a hospital public-private partnership (PPP) tend to include a tight timeline, combined with intense public scrutiny. When the project is the world’s largest PPP and involves a $3-billion investment, stakes go up. Add to that, having to work around ongoing operations of the old hospital and the challenge is real. Located in Stockholm, Sweden, the New Karolinska Solna (NKS) Hospital project is big. It covers some 320,000 square metres, has more than 12,000 rooms, 35 operating theatres and 17 magnetic resonance imaging or MRI units. NKS is not just big, though, it is clever too and one of ten lighthouse innovation cases in the World Economic Forum report, Shaping the Future of Construction: Inspiring innovators redefine the industry, prepared with Boston Consulting Group. Key to its success has been cloud-based and mobile-accessible building information modelling (BIM), says senior partner at BCG and report co-author Philipp Gerbert. “The single most important factor allowing a smooth handover was arguably usage of comprehensive life-cycle BIM. More broadly speaking, taking a longer-term perspective through the 20-plus years PPP contract and working closely with the facility manager and owner from design stage certainly helped,” he says. NKS is being delivered as a turnkey PPP project, signed by Stockholm City Council and Swedish Hospital Partners – a joint venture between Skanska Infrastructure Development and UK pension fund Innisfree – for designing, building and operating the hospital until 2040 or 2055. As well as leveraging technology benefits of BIM, the project employed a significant prefabrication strategy and invested in human resources. Combining in-house talent at Skanska Healthcare with experts from the UK, United States and Poland, as well as rotating staff between overlapping project phases, benefited knowledge exchange – so people also played their part.