As the UK construction industry strives to rebuild itself to deliver the new homes and infrastructure the country needs, new money and new metrics apply

“It’s the economy, stupid!” Given that we are in the middle of the presidential primaries in the United States, the classic campaign slogan of the Bill Clinton era offers an apt retort when asked to name the factor most likely to shape the future of construction. In the modern marketplace of 2016, however, that answer arguably only begs another question: “Which one?”

In an industry notorious for putting cost ahead of anything else, money is no longer what it was; no longer the only trade currency. This is because construction also operates now in a number of new and emerging growth economies – the low-carbon economy, circular economy and digital economy – where value is not counted exclusively in cash.

“Buildings Day was global recognition that growth in construction need not come at the expense of the environment, and that the industry can actually thrive economically through more innovative and responsible approaches that address climate change,” she says.

“The Paris agreement is the strongest signal yet that a low-carbon economy is inevitable. For construction companies, that means taking a leading approach to green buildings or risk being left behind as markets shift.”

Paris was no mere public relations stunt for construction. Commitments were made to register, renovate or certify more than 1.25 billion square metres of green buildings – almost double the size of Singapore – over the next five years.

At present, the building sector is said to represent 30 per cent of global CO2 emissions and playing its part in limiting global warming to two degrees will mean a reduction of 84 gigatonnes of CO2 by 2050, despite population growth and urbanisation – the equivalent of not building 22,000 coal-powered energy plants.

Numbers on the delivery side are encouraging, though, with figures from Dodge Data & Analytics showing global green building continues to double every three years. In many ways, this global megatrend should play to the strengths of UK construction in particular.

The UK leading the way

While UK construction might be in the vanguard of low-carbon economy markets, its investment in the circular economy is less advanced, in the opinion of Duncan Baker-Brown, an architect at BBM Sustainable Design and senior lecturer at the University of Brighton. Responsible for the radical Brighton Waste House, Mr Baker-Brown is writing a book entitled The Re-Use Atlas: A Designer’s Guide Towards the Circular Economy and views UK performance thus far as a positive start, but only a qualified success. 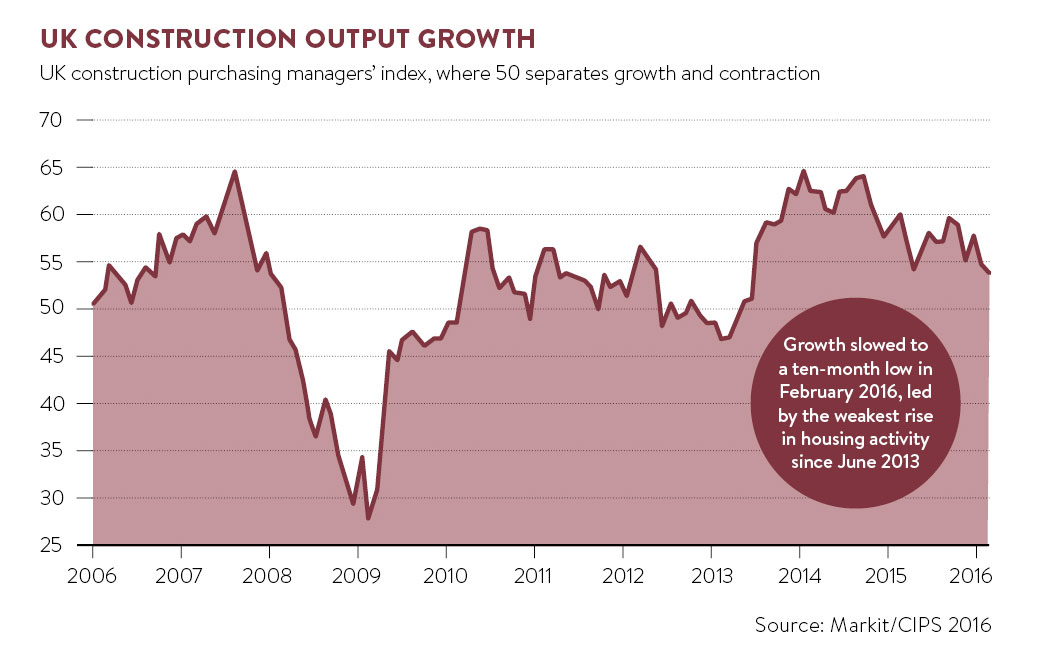 “I have found a number of inspiring case studies in the UK – Carmody Groarke’s Maggie’s Centre, LYN Atelier’s Hub 67 – as well as organisations such as Recipro that redistribute unwanted construction material,” he says.

“Top-tier contractors also appear to be receptive to the concept, with networks emerging such as the Supply Chain Sustainability School underlining this point. However, if you want to find real cutting-edge examples of ‘cradle-to-cradle’ construction, then you need to look towards mainland Europe, to Belgium and the Netherlands.”

For Munish Datta, head of Marks & Spencer’s Plan A sustainability programme, the challenge of new economies going forward lies in the need to scale operations and make best use of current capabilities – effectively doing more with what we have.

“Most of the technology the construction industry requires to harness a more environmentally and economically sustainable future exists today. Bringing innovators together with building designers, constructors and occupants is key,” he says.

For M&S, initiatives such as the Big Innovation Pitch run with leading industry event Ecobuild, offer the high street retailer the chance to engage direct with the current crop of innovators and UK small and medium-sized enterprises.

Change is coming, like it or not, insists Guy Hammersley, executive director of the Building Research Establishment and BRE group director for BIM, who speaks frankly about the industry’s lack of options. “The digital revolution is here in every aspect of our lives. I am reminded of a strapline from the 1990s: Innovate or Liquidate – if we don’t embrace change, then the outcome is inevitable,” he says.

“What I do see in the UK is a real impetuous by innovative companies to embrace BIM, aided by the government mandate and driving change which may well make the UK a global leader.”

“The sector needs to show investors that it is a competitive 21st-century industry embracing the use of digital tools, innovation and collaboration to deliver the best solutions for customers and their end-users,” says Dr Toyne.

Whether contributing to the £92-billion annual industry output on smart cities or high-speed infrastructure, via off-site methodologies or ethical sourcing, the three million employed in UK construction now operate in a multi-economy age, whatever their job title. This is a world where waste, carbon and data are the new money; circularity, efficiency and connectivity are the new metrics. It is still construction, only better.