Chocó, in northwest Colombia, sits at the confluence of the Pacific and the Atlantic. The only department – that is, state – of the country that has coasts on both oceans, it is made up of steaming jungle mountains with sea-level towns. Pacific beaches of volcanic black sand sit expansive and empty, leaving Chocó’s army of diseased mosquitoes with limited options for their nightly feeds.

It is also poor. Nearly 66 per cent of the population lives below the poverty line, according to government statistics. The region is dotted with illegal gold and platinum mines, which are the main source of income for many, but have left behind polluted waterways and stagnant lakes where mosquitoes breed. All in all, it is an unlikely place for a tourist revival, as Colombia continues to remodel its image from world-leading danger zone to poster child of reform. And yet the tourists are starting to drift in.

“More tourists are starting to come here,” says Jorge, a local entrepreneur who has hostels throughout the country, including a site in Bucaramanga. “I don’t live here, I just come down a few times a year to recharge,” he adds, setting down his knife and fork. “There’s no internet in the house, and electricity only for the lights. It’s beautiful.”

The region has a lot to offer for the adventurous tourist, but perhaps the strangest and most-fitting attraction is a 25-hour journey on a ramshackle tugboat, the Bahía Cupica, which takes a few passengers as it chugs down the coast from Bahía Solano, the friendly but dilapidated capital of Chocó’s nascent tourism industry, to the thriving but much-maligned port of Buenaventura.

The Bahía Cupica is a bucket of bolts. Paint peels from surfaces across the boat’s two levels. Every tool on board looks so old that together they form a collection of maritime hand-me-downs. Formerly a fishing boat, somehow the smell of seafood still pervades every inch of every deck. There are a few plastic garden chairs scattered around the bottom deck, as well as an alarmingly sparse collection of rubber rings.

To fly is very expensive. Other options – buses or cars – take too long because the roads are not good

As the passengers board, agile sailors are still hauling out immense coils of steel wire, calling to each other by nickname – “Mono”, meaning monkey, and “Flaco”, skinny.

Onshore, Captain Akileo – a bespectacled, quiet man who has helmed the boat for the last eight years – is the embodiment of a steady hand. On board he shuffles around in flip-flops, shorts and a T-shirt emblazoned with the trademark of a local rum brand. Later, on the approach to Buenaventura, he changes back into smarter attire.

Crewed by nine sailors, the boat carries up to 30 passengers, officially, though demand often means this number is exceeded. Passengers without one of the tiny bunks, or camarotes, also travel without a guaranteed life jacket. While the ticket costs the same, they are also told that they are travelling at their own risk.

Its main purpose is hauling food and building supplies back and forth between the two ports; passengers are something of an afterthought, meaning that travelling on the Bahía Cupica is long and tiresome. It sails between Bahía Solano and Buenaventura on Tuesdays, then back on Saturdays. Most of the passengers are locals from the Colombian Pacific coast, who view the boat as a necessity. At 150,000 pesos (£40), it is one of the few affordable and reasonably safe ways to get out of Bahía Solano.

“This boat is the best option for me to travel between Bahía Solano and Calí,” says Romero, a passenger. Dressed in jeans, a purple sweater and a denim fisherman’s hat, he doesn’t take his eyes off the sea as he speaks. “To fly is very expensive, perhaps as much as 300,000 pesos. Other options, such as buses or cars, take too long because the roads are not good.” 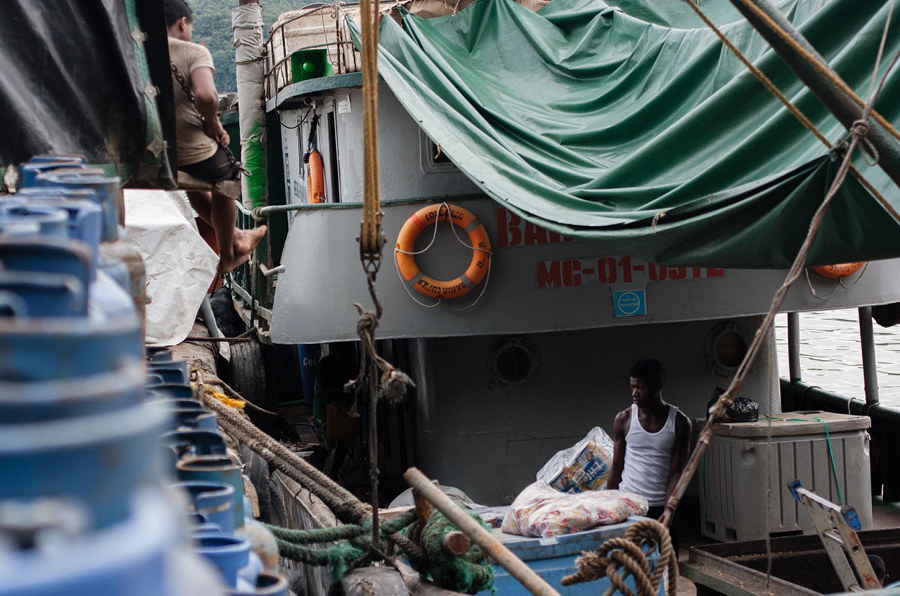 There are just three foreign travellers on this journey; two from Europe and one Panamanian, who is outrageously drunk.

He throws his empty beer cans into the port. Throughout the journey, this becomes a trend.

At sea, bored or sick passengers choose, by and large, to confine themselves to their bunks rather than venture out into the elements; several of those that do brave the deck lose the contents of their stomachs. Throughout, though, the sea is mostly calm, broken only by the odd swell and remains as flat and grey as the sky above it. At night, forks of lightning crack over the mountains on the horizon. The stretch of water is famous for its sightings of migrating humpback whales, but just one solitary dolphin fin breaks the waves when the boat’s on the home stretch into Buenaventura.

Sat to the stern of the Bahía Cupica are Manuel and Manuel, a father-son duo travelling from Bahía Solano to Armenia — another Colombian state — with a seemingly endless number of boxes filled with unknown contents. The elder of the two Manuels, a grandfather, prefers travelling on the Bahía Cupica to the faster, and bumpier, six-hour lancha – speedboat– option.

“In the morning when the sun comes up, you’ll be able to see the coast,” he says, sweeping his arm across the horizon.

The two are not the only ones enjoying the journey down. A thickset man who gives his name only as Redon and claims to be good friends with Oscar Figueroa, Colombia’s gold-medal weightlifter – “he’s like my hermano [brother]” – is happy to be on board.

“I normally take the speedboat,” he says. “But this is special. It’s not something that is very common, it’s a different way to travel. I like it.”

The weather can make the journey unpredictable. This time, the Bahía Cupica was only delayed by five hours, after lashing rain from the wintry Pacific slowed the crew as they loaded supplies. It is not unheard of, the captain says, for the boat to be forced back to harbour by storms.

There are other hazards at sea. One passenger, Jafeth, from Bahía Solano, is travelling to Calí with his young daughter.

When conversation turns to piracy, he is quick to say that there is no risk – but that the narcotráficos, Colombia’s infamous drug runners, do ply the route up the coast. However, he explains, due to the efforts of the Colombian navy, or armada, they are forced to stick close to the coast to avoid detection.

That the tug is allowed to go about its business is important for those people who rely on its steady work in both destinations – although a man in a gruesome T-shirt of a bloodied Christ, handing out oranges on board, says: “This boat is more important for the people of Bahía Solano than for Buenaventura,” before walking off without giving his name.

For Jafeth, the Bahía Cupica is not just about travel. Staring at Colombia’s Pacific coast for hours on end, it also provides a chance to reflect on an area of the world that – until he moved to Calí – he called home.

“Things are different now,” he explains. “When I was young, all any of the kids cared about was football and fishing. Now they only care about money. They look for the drugs dumped by traffickers that have to make a getaway. It’s not like it used to be — things have changed.”