Caught in the crossfire between the forces of urbanisation and decarbonisation, cities are the clean-growth battlegrounds of the 21st century – where booming populations must have their demands met, but their impacts mitigated.

Clean growth is doable, but difficult. To meet climate goals, PwC has calculated carbon intensity of the global economy needs to fall by 6 per cent a year, twice as fast as ever before. With infrastructure always the solution, but often a problem, cities are where this war on carbon will be won or lost. 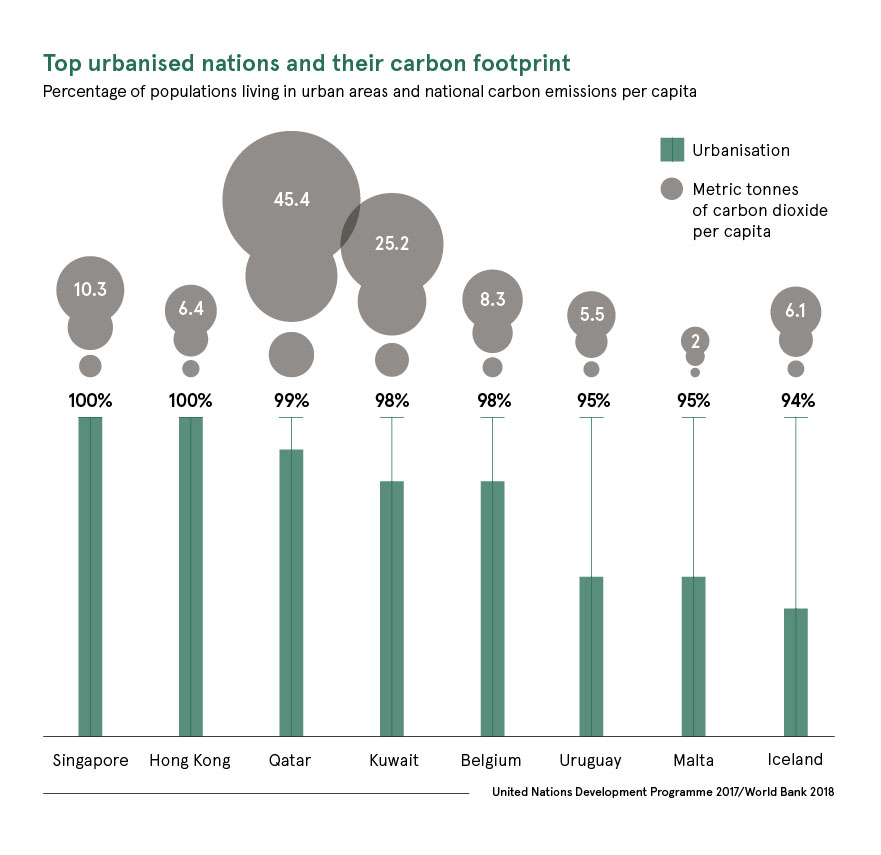 Cities consume over two thirds of world energy and account for some 70 per cent of global greenhouse gas emissions, yet they occupy just 2 per cent of land mass. With energy demand forecast to rise 30 per cent by 2035, the heat is on.

Furthermore, city footprints must accommodate ever-greater footfall. More than half the global population already lives in urban environments, with two billion more people due by 2050. Welcoming up to three million new faces a week, cities shoulder a disproportionately large share of the burden.

We make do with patch-up jobs, rather than putting in serious investment to make cities greener and more sustainable

All numbers associated with cities seem big, except those for infrastructure spend, says Christina Välimäki, vice president of research in segment markets at Elsevier. “Our infrastructure is old and expensive to change, meaning there is little budget for much more than incremental repairs,” she says. “We make do with patch-up jobs, rather than putting in serious investment to make cities greener and more sustainable.”

Despite £600 billion promised over ten years through the UK National Infrastructure and Investment Pipeline, no clean-growth revolution appears imminent, Chris Fry, director of infrastructure and regeneration at consultancy Ramboll, concurs. “Smart Rome will not be rebuilt in a day,” he says. “There will be opportunities for big disruptive changes, but in established cities with finite budgets, it is more likely incremental innovation will succeed.”

Most efforts will be joint projects, adds Ben Smith, director of energy, cities and climate change at Arup. “City governments typically only have direct control over a small proportion of emissions. Effective collaboration is, therefore, essential to realise significant reduction,” he says.

Inconsistency in policy, though, presents a big barrier to effective decarbonisation, with lack of clarity around national standards slowing change, according to Dr Jacqueline Homan, cluster lead at Climate-KIC UK and Ireland. “We have high-level strategic targets – the Covenant of Mayors and UK100 – and no shortage of technical solutions,” she says. “We need devolution, both fiscal and regulatory, to make change effective.”

Access to finance is critical. The Cities Climate Finance Leadership Alliance estimates an extra $1.1 trillion a year could ensure urban infrastructure is low-emission and climate-resilient. According to the World Bank, however, barely 15 per cent of global climate finance actually reaches cities.

Getting the money on the table can depend on loading the dice in favour of desirable outcomes, says Rick Robinson, Arup’s associate director of digital property and cities. “Our most challenging task is often to shape the financing and investment vehicles that make projects possible, say by using the developer award or procurement process to incentivise smart infrastructure in proposals, when objectives are more complex than simply financial return.”

In a vicious circle of impecunity, however, lack of finance is denying many cities the chance to save money. Nevertheless, cities powered by 100 per cent renewable energy are happening in the United States, the Climate Reality Project reports. First, in 2014, came Burlington, Vermont, with Ben and Jerry’s hometown set to save $20 million over two decades. Even Las Vegas, capital of conspicuous consumption, powers all municipal activities with green energy, cutting emissions to 1950s levels and its annual electricity bill by $5 million.

Most cost-constrained cities in urgent need of a clean-growth game-changer are pinning hopes on digital, says Ramboll’s Mr Fry. “For the coming decade, the biggest gains may be unlocked firstly by analytics and artificial intelligence to make better use of existing data, secondly through digitalised design of new infrastructure-enabled development, and thirdly through next-generation sensors and control technologies,” he says.

Application potential in urban infrastructure is widespread for sensors, says Andy Berry, vice president for Europe, the Middle East and Africa at Pitney Bowes Software. “Every city is a collection of assets from fibre cables to fire hydrants, parking meters to properties, street lights to traffic signals,” he says. “Only when city leaders can identify, track, monitor and manage these assets, does clean growth become viable. And it’s all down to data.”

Much data currently created and collected, however, is simply not being used at all, never mind leveraged at strategic level. When we start to understand relationships between people, places and things, via links within data, is when it transforms into meaningful, actionable intelligence, says Mr Berry. “Suddenly, number-crunching becomes easy with deep analytics and machine-learning,” he says. “Government agencies can identify trends and formulate strategies for sustainable infrastructure – strategies that lead a city to cope with and promote clean growth.”

Ultimately, tech alone is neither the issue here, nor the answer, says Alex Gilbert, managing director of Amey Consulting. He concludes: “Clean growth is as much about process and the way decisions are made, as technology. It is easy to fall into the trap of thinking smart cities are all about technology. The biggest challenge is in driving and supporting change in the way people work.”