According to the UK Commission for Employment and Skills, employers face around 13.5 million job vacancies in the next ten years, but only seven million young people will leave school and college during this period to fill them.

Older workers are an obvious untapped talent pool, with 36 per cent of the working population expected to be over 50 by 2020, according to the Government Actuary’s Department.

As well as experience, older workers can offer businesses loyalty and flexibility, providing they have access to appropriate workplace support

And this pool is growing. The Department for Work and Pensions report, Employment statistics for workers aged 50 and over, by five-year age bands and gender, from 1984 to 2015, reveals that the employment rate for people aged 50 to 64 has increased from 55.4 per cent to 69.6 per cent, and doubled for people aged 65 and over, in the past 30 years.

Similarly, the proportion of people aged 70 to 74 in employment has almost doubled over the past ten years alone. 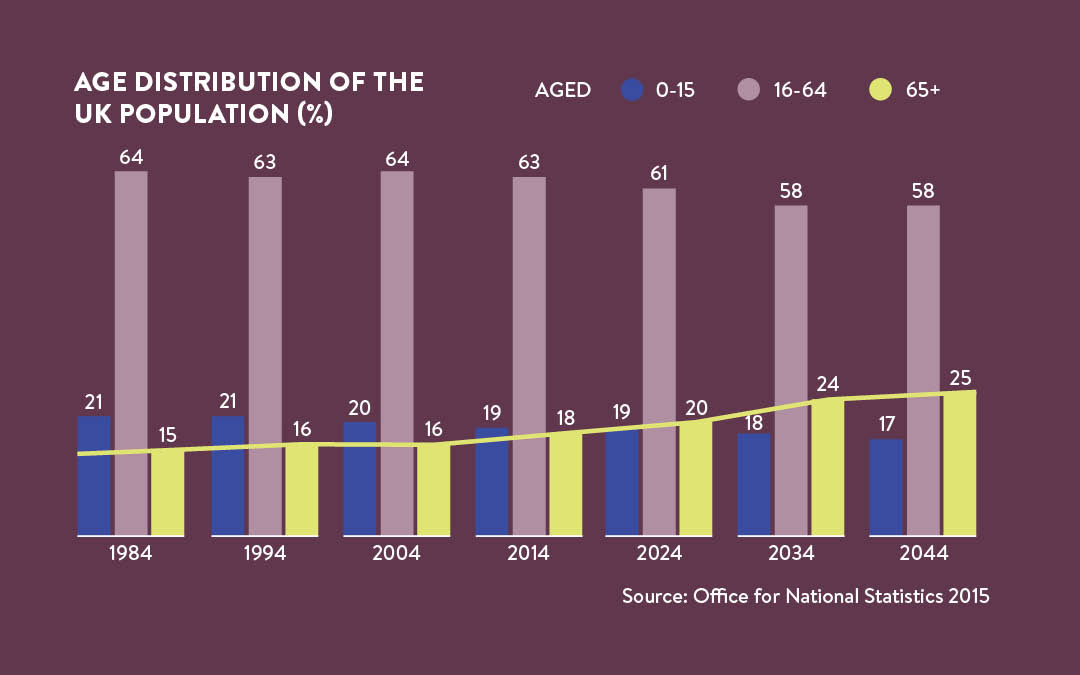 The removal of the default retirement age in 2011 has helped to drive this growth by enabling older workers to continue working either because they enjoy their job or, more likely, because of a shortfall in their retirement income. But many employers are failing to exploit this talent pool.

The Chartered Institute of Personnel and Development (CIPD) report, Managing a healthy ageing workforce: a national business imperative, published in 2012, claims that many employers are slow to change because of a preoccupation with day-to-day business issues, but also because of a tendency to value qualifications over experience.

But as well as experience, older workers can offer businesses loyalty and flexibility, providing they have access to appropriate workplace support. This may include comprehensive occupational healthcare, including critical illness and income protection, and workplace design adjustments such as access to ergonomic equipment.

Healthcare benefits may be offered as part of a wider health and wellbeing programme that incorporates financial wellbeing support in the form of pension modelling tools, retirement preparation courses and access to independent financial advice, which can help employees to tackle any shortfall in their retirement income. 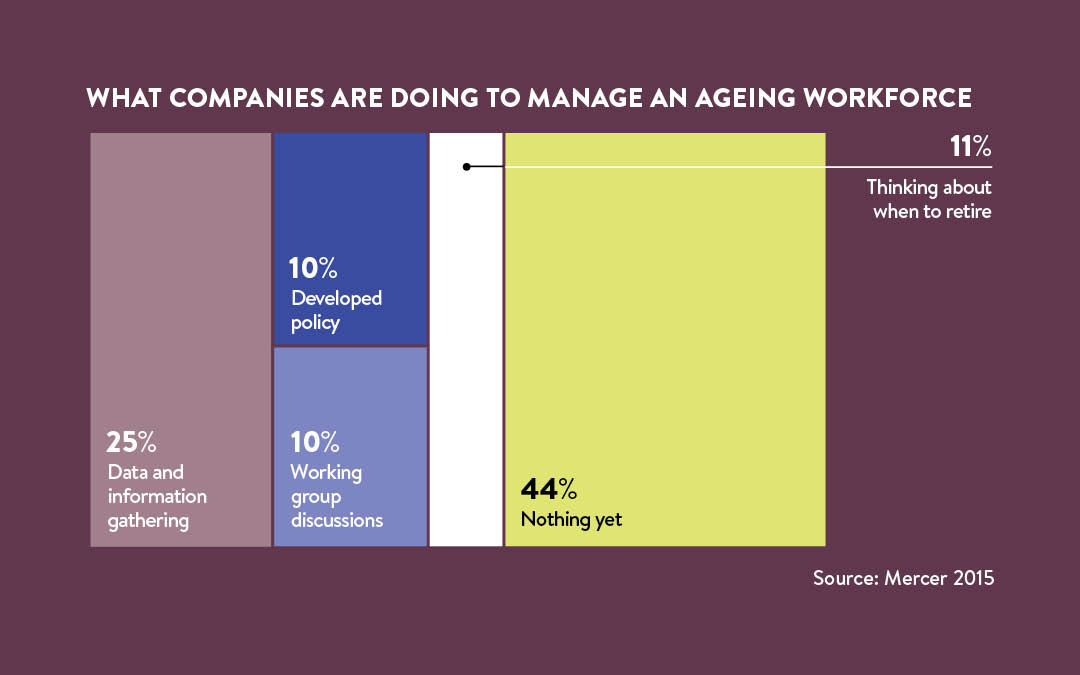 Carer support should be a key consideration within this offering given there are around seven million carers in the UK, with one in five aged 50 to 64, according to the charity, the Carers Trust. Further, 65 per cent of carers aged 60 to 94 have long-term health problems or a disability of their own to manage.

But Business in the Community (BITC) has found only a third of employers have a formal policy on supporting carers, which is a situation that may well take time to change.

Ksenia Zheltoukhova, research associate at the CIPD, says: “We talk about ‘employers’, but ultimately there’s a person behind that decision-making, and [whether or not a policy is implemented] very often it comes down to the value system of that individual and where they see the benefits for the workforce and for the business.”

However, training and development is perhaps the most important consideration for organisations striving to support older workers because of the value they place on job variety.

Reverse mentoring, whereby younger employees pass on their skillsets to older workers, is a growing trend within many organisations. The transfer of digital skills is a case in point.

But many HR chiefs are not prepared for such new skillsets and how to exploit them, often resulting in employees being placed in unsuitable job roles and being left to feel they are not fulfilling their potential. 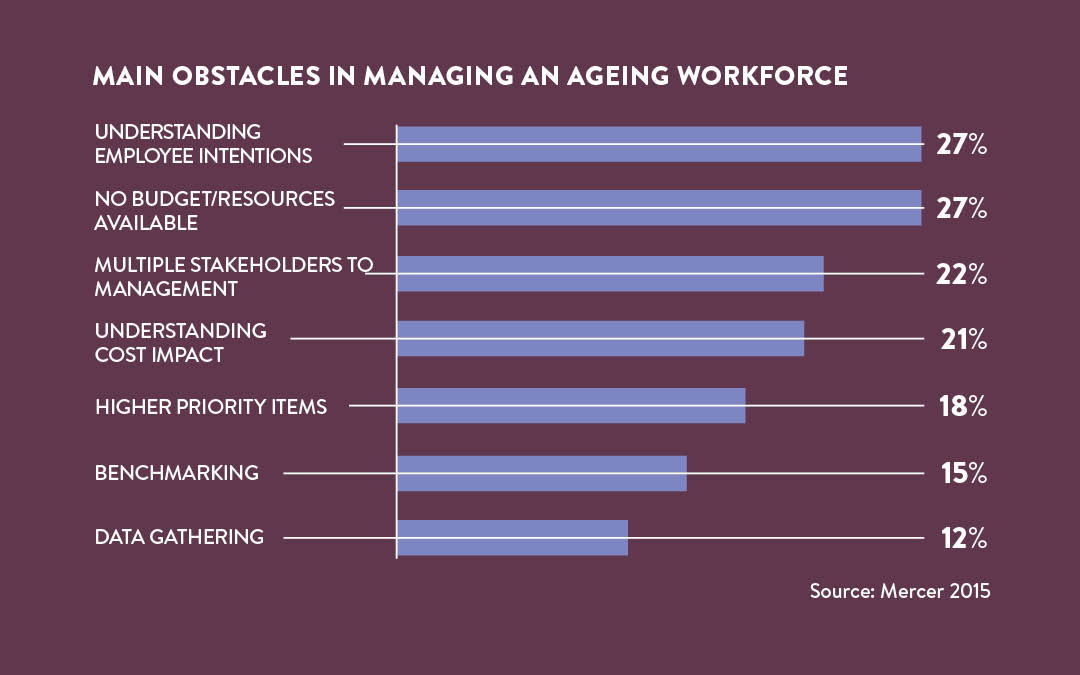 Almost one third (27 per cent) of employees believe that moving to a new job will kick-start their career, which is perhaps why “job shopping” – frequently changing job – is a current labour market trend and why young employees have an appetite for developing transferrable skills.

Apprenticeships and tailored training courses may help to retain staff, so long as employers factor in the need for employees of all ages to work flexibly.

Peter Reilly, principal associate at the Institute for Employment Studies, says: “It’s about flexibility that sees people coming and going more, and about people wanting to have time out to do particular things at particular times.”

This may involve employees requesting to work and live between different countries. Flexible working has progressed from a conversational piece on HR directors’ agendas to become a dominant feature of young people’s psychological contract with their employers. It is also essential for carers.

Rachael Saunders, age at work director for BITC, says: “We need a change in organisational culture. I think we’re at the point where young people coming into work almost assume that [flexible working] is something they ought to be able to ask for.”

But Mr Reilly believes herein is a tension between employees’ needs and traditional work patterns within many organisations, which favour standardisation rather than difference and divergence.

“[Many organisations] want conformity and don’t want people to go off-piste too much. One of the drivers of that is efficiency and the second is employers want control,” he says.

“But that just doesn’t fit with employees’ needs. Employers need a system that has more flexibility. It has to allow people to respond to their own circumstances and the organisation to have the ability to adjust, just as the organisation has to have people adjust to its changing circumstances.”