Can the internet of things help power a health revolution?

Funereal gloom engulfs modern healthcare with most announcements about its future preceded by four jet-black stallions and trailed by a procession of solemn mourners.

So bad are the NHS’s vital life signs – a £34 billion funding shortage and chronic illness time bombs – that it feels just a matter of time before a sorrowing nation bids farewell to a dear institutional friend.

But there is light. If the ages of medicine have been characterised by such wonders as anaesthetic, antibiotics, robotic operating techniques and biologics, a new era of therapies is upon us and it is one that could breathe fresh life into the creaking body of healthcare. The internet of things (IoT) may not have an august medical profile, but it can be the power behind a health revolution.

The wearable technology of the fitness craze is about to mature into a procession of devices that can monitor a body’s vital rhythms and predict illness. Small patches on the skin and even ingested capsules will stream real-time data to clinicians who can keep patients out of hospitals and GP waiting rooms.

Getting connected could save us a fortune and postpone the psalms and eulogies for the NHS.

The opportunity for change – and profit, with Cisco predicting the IoT could generate £48 billion of business over the next decade – is attracting some of the most creative minds in technology including the big players such as IBM and Apple.

Their combined brain and corporate firepower could liberate the NHS’s choke-points such as clogged waiting rooms and the sclerotic pathways of care full of delayed and disjointed appointments.

Crucially, it also has the potential to encourage the public to take ownership of their health and make the lifestyle changes that could stem the engulfing tides of diabetes and heart conditions.

The gadgets are ready; the IoT is ready. The number of smartphones in the UK will reach 43.4 million in 2017.

James Norman, former IT director at the Royal Liverpool and Broadgreen University Hospitals NHS Foundation Trust, believes that new data streams from devices linked to the internet will demystify health for the public and provide them with knowledge to live better lives.

“It is about keeping them out of hospital by keeping them informed. If a patient is involved in their care, evidence shows they have a better chance of a more successful and quicker outcome, and their demand on services is reduced,” he says.

Mr Norman, now UK public sector chief information officer for global technology leadership specialists EMC, adds: “We need different models of care with patients being treated at home, and greater use of technology around big data and predictive analytics to find the best care for patients.

“The NHS can change and change quite quickly, but it is all about investing in the right skills. If you don’t invest in promoting the skills to analyse the data you might as well put it in a black hole – it is a waste of money.”

The use of tele-health systems – e-mail and video links to diagnose and guide patients – is growing, but the pace of change needs to accelerate so the one million patients seen by NHS every 36 hours have easy access to monitors and devices to have a dynamic impact on mortality as well as the systemic choke-points.

“In five years’ time, hypertension will not be the silent killer it is now because we will know everyone who is hypertensive – we are at the $50 price per person for the device to monitor this, so it will have a major impact,” says Thibault Sevestre, a digital innovation lead for Philips, which is developing devices and systems for heart conditions, diabetes and chronic obstructive pulmonary disease.

“With the IoT and the right technology, we are going to be able to offer diagnosis, risk-profiling and the right support to take action for the masses very quickly. It means you intervene with 10 per cent of patients who need attention rather than those coming in for their scheduled visits yet are actually doing pretty well.”

Pilot Philips projects have returned a 30 per cent reduction in both re-admissions to hospitals and to operating costs. Extrapolate that across the NHS landscape and the savings could hit £40 billion.

IoT devices are also predicted to punch a huge hole in the annual £300-million bill for unused medicine by prompting patients to adhere to regimes.

Dr Shahid Ali, a Bradford GP and Professor of Digital Health at the University of Salford, has already proved the benefit of connectivity at his NHS practice where 98 per cent of patients on a tech-supported programme reduced their blood pressure within three months.

“When you empower individuals rather than dictating to them, you begin to see that real change. We need to personalise services and be more proactive and introduce immediacy and they will respond,” he says.

“Getting the best from it requires cultural change. We are not at the tipping point yet, but it has to come relatively soon, within the next five years.”

Michael Thomas, a healthcare analyst at A. T. Kearney, adds: “There is a real opportunity for a healthcare revolution – it is the chance to engage with patients to tailor treatments and make them take more responsible for their health.

“Healthcare is so much cheaper if delivered digitally and it is the best shot we have.”

Security of data is still a big concern along with the connectivity of NHS hospitals – one survey suggested only 23 per cent had access to wi-fi.

A project in Barcelona deploys a smart hub in homes to act as an emergency alarm to detect activity levels and as a medication reminder, wirelessly relaying the data. It has generated a 20 per cent drop in call-outs and residents enjoy an average one year extra at home.

Steve Sadler, the Yorkshire-based company’s chief technical officer, believes IoT efficacy will be governed by the quality of the data collected as well as the sophistication of new devices and monitors.

“When it is there, the IoT helps us enrich that data so we can build better services,” he says. “The big challenge is for the technology not to work in isolation. It needs context and linking, but get it right and we can replace the fragmented silos of healthcare and the future is very exciting.” 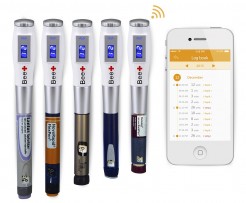 The world’s first smart diabetes and glucose monitoring device that can transmit dosage data via Bluetooth to a smartphone or tablet powered by iOS or Android. Every dose is recorded, sent from the injection device, and shared with clinicians and family. Made by the Swiss IoT healthcare company Vigilant, it won a prestigious 2015 innovation award. 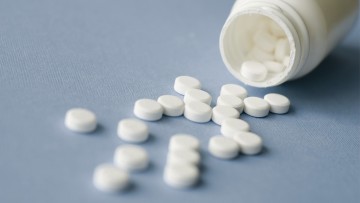 The tiny sensor can be integrated into an inert pill and swallowed to communicate if a patient is sticking to their medication regime and the effect it has on the body. Made by Proteus Digital Health, it emits signals after contact with stomach fluid and relays crucial information to smartphones. 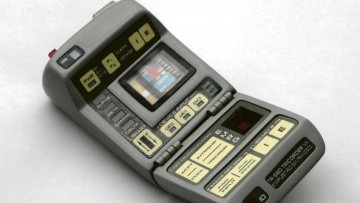 A $10-million prize from Qualcomm has encouraged the development of non-invasive devices that can test for 15 conditions, including diabetes, stroke and lung diseases, using a range of sensors, portable tests and imaging diagnostics. Ten finalists have spent more than three years crafting a range of handheld devices to make Star Trek science fiction a reality. The winner will be announced next year. 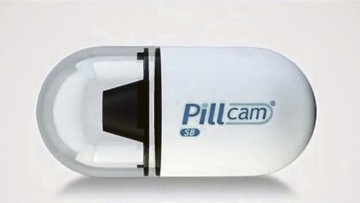 Israeli company Given Imaging has invented a camera in a capsule the size of a large vitamin pill that can be swallowed and transmit images as it travels naturally through the digestive tract. The single-use PillCam houses a tiny battery, radio-frequency transmitter, two image sensors and circuit boards that capture images at up to 36 frames per second. 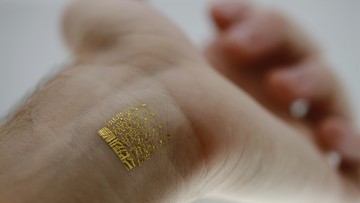 Ultra-thin technology containing semi-conductors in a patch that sticks to the skin like a tattoo. They monitor expectant mothers through pregnancy, picking up foetal and maternal heart rates as well as other subtle condition changes. The device, from the University of Illinois, is hailed as a vital early warning for premature births.