Apple is encouraging customers to use their smartphones as mobile wallets. But can obstacles be overcome to challenge plastic and cash? Dan Barnes reports

When chief executives of 28 US companies, including McDonald’s, eBay and JP Morgan, were asked about Apple Pay, the new American mobile payment system incorporated in the iPhone 6/6+, eyebrows were raised. The questions were from investment analysts keen to understand what the launch meant for other businesses. Such curiosity in a single mobile payment system was unprecedented.

Mobile payments – as distinct from paying online using a mobile phone – were seen in the early-2000s as a way to replace the physical payment card, either bank or credit. When a chip was adopted to hold and encrypt data replacing a magnetic stripe, there were a range of possibilities as to where it could be housed and the suddenly ubiquitous mobile phone was a prime target. The chip was able to contain a lot more information than a stripe and could, therefore, provide a broader range of services in addition to the simple transaction.

The Europay, MasterCard, Visa chip has been standardised across Europe and is expected to be conclusively rolled out in the United States by October 2015.

Renewed interest in mobile payments reflects the sector’s growth. Based on confirmed 2012 figures and an average compound annual growth of 7.9 per cent since 2008, we can estimate there were approximately 350 billion global non-cash transactions in 2013, of which 18 billion (7 per cent) were mobile, according to the RBS/Cap Gemini World Payments Report 2014.

With growth like that it is easy to see why analysts are excited. But there is a catch. Making money from mobile payments is hard. Electronic payment systems all use traditional payment providers – banks, credit card networks and so on – to fund them.

To gain acceptance from consumers, any payment system has to be as free, easy and secure to use as cash or card. New payments systems must, therefore, take any cut from the existing fees for electronic payments, either charging the merchants (shopkeepers) or the acquirers (banks and credit card firms).

An alternative to making money on the payment is getting value from the data gathered by merchants or payment system providers.

“Data is the new gold; if you can find ways of selling advertisers very closely defined customers, down to an individual level, that creates a business model for an advertising-led approach,” says Kieran Hines, practice leader for financial services technology at analysts Ovum.

Even those firms that provide traditional payments systems see value beyond taking a cut of the transaction. For example, Barclays launched Pingit, a money transfer smartphone app, in 2012. It had been downloaded by three million users as of August 2014, more than double the users it had in August 2013, and is now offering a remittance payment service to India. However, the bank says Pingit does not provide a direct revenue stream, instead seeing it as a tool for cross-selling other services.

SHOW ME THE DATA

As Ms Jameson notes, certain barriers have inhibited a rapid roll-out of mobile payments technology. For example, this fiercely competitive landscape does carry valuable data, not only around payments, but increasingly around additional online and physical behaviour.

“There is a lot of interest in data and analytics to offer target customers discounts and promotions based on their buying behaviour and location,” says Mr Hines “Visa recently announced it is looking at offering these services, enabling banks to monetise data depending upon where their cards are used.

“Amazon has a billion-dollar business in advertising insight; they know a huge amount about what you browse, what you buy and where you deliver it to. That gives it insight into postcodes and you get a lot of targeted advertising based upon what you do with Amazon. That is increasingly important.”

However, who gets access to the data is a sticking point. Mobile phone operators, mobile networks and banks have tried to engage with one another for at least 15 years, but have frequently failed to agree who owns the customer relationship and data.

Without a consensus between the providers of the payment devices and infrastructure there have been few technical standards developed. This is a considerable problem as merchants will not always have the right technology to accept a payment, unless they bear the cost of speculatively supporting many. Any non-card or non-cash payment type that is frequently declined will be forgotten by customers.

The increasing use of near-field communication (NFC) – the technology that is used by Apple Pay for communicating with a device at a merchant – as a standard in the UK and other countries will help.

“For a mobile wallet to be successful it has to have ubiquity; consumers need to be able to use it anywhere at any time,” Ms Jameson says. “If it is heavily dependent upon mobile data or internet access in the real world, there are places where you cannot get a signal. NFC is useful in bypassing that issue.”

Several retailers offer loyalty schemes tied to payment devices, but each of these is limited to use in their own shops. CurrentC, a mobile wallet, is being developed in the US by the Merchant Customer Exchange (MCX), a consortium of big US retailers. From 2015, it will offer a free downloadable app that lets users save, earn loyalty rewards and make payments across participating shops.

“MCX considers itself a really big competitor to Apple in the US,” says Ms Jameson. “It recently decided to ask participants not to accept other mobile wallets. However, consumers want to use whatever payment tool they have, so I think having that limitation will hinder commerce.”

Kulbinder Garcha, managing director, global communications equipment and IT hardware research analyst at Credit Suisse, says that either Amazon or Google have the capacity to offer wallets that could rival Apple’s, but there would be considerable differences in approach, based on their particular businesses’ characteristics.

“Amazon is trying to improve the working of its online store,” he says. “The nirvana of mobile wallets is that you stop using credit cards completely. Amazon won’t be the company to deliver that. Google could be, but it has to get handset manufacturers to build high-quality hardware, then find a solution to the question of who owns and shares the data.

“Apple thinks no one should have it. Google wants that information. Google went to market with telcos AT&T and Verizon, but telco firms have their own mobile strategies. My opinion is that Google would have to rework its mobile wallet system and relaunch independently, with two or three high-level handset manufacturers.”

To date, mobile payments businesses are not flourishing. In a model where critical mass is needed to drive turnover, the existence of too many competitors can limit uptake and make the business unprofitable even for big players. At the end of March, mobile operator O2 closed its mobile wallet after two years, as parent company Telefonica announced involvement in several other mobile payment projects.

The question now is whether Apple has the critical mass to establish the conditions and standards, which will resolve existing disputes and allow the technology to become more widespread. 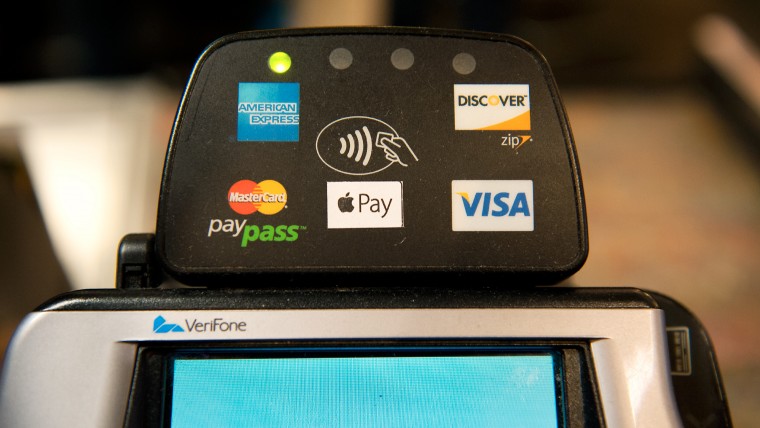 Launched on September 9, Apple Pay is a US-only mobile wallet, a mechanism for providing a proxy payment device for other payment cards which are “held” in the wallet. It uses near-field communication (NFC) and a fingerprint scanner on the iPhone 6 and iPhone 6 Plus screen to verify that both the device and user are genuine.

“It is floated on a very elegant security solution using both tokens and biometrics; making it potentially more secure than a card transaction,” says Thad Peterson, senior analyst at Aite Group.

A token is a proxy for an account number. It is encrypted so only the issuer can read it. It is sent through the system and when the card issuer receives it, they can decrypt it and authorise the payment without the terminal knowing who that individual ever was.

The scheme has considerable support from card issuers, including payment networks American Express, MasterCard and Visa, and banks including Bank of America, Capital One, JP Morgan Chase, Citi and Wells Fargo. There are plans to roll it out via the Apple Watch, which will allow earlier-model iPhone owners to use it.

Apple is rumoured to take between ten and fifteen basis points (between 0.1 and 0.15 per cent) from a transaction and does not gather data to sell on or use.

“One of the beauties of the Apple Pay system is that Apple doesn’t know who is using what device, for what,” says Mr Peterson. “The transaction is completely anonymous to Apple. So retailers, such as Target, can rest assured that no one knows which customer was using Apple Pay in their store. Apple has stores in the technology space, but not in any other space so retailers shouldn’t have a conflict.”

Kulbinder Garcha, Credit Suisse’s Apple analyst, says the firm has an existing potential customer base in the form of 800 million iTunes store accounts with associated credit or bank card information, and a highly successful user interface and set of tools that encourage users to employ their Apple devices as frequently as possible.

“How much further [users] can grow is unclear, but we expect it can reach one billion in the next couple of years, at least,” says Mr Garcha. “Apple’s market share in smartphones is about 15 per cent, but it accounts for 80 per cent of mobile transactions. People spend two to three hours on iOS devices, significantly more than on Android devices.”

However, there are potential barriers to success. Firstly in the US the adoption by retailers of EMV (Europay, MasterCard and Visa) or NFC technologies has been limited. Currently it only works for iPhone 6 and iPhone 6 Plus customers and there has already been some backlash about data ownership from merchants, with a number of shops refusing to accept Apple Pay. It will have to overcome these limits to make its investment add up.

“Apple has 12 months to make this work,” says Mr Garcha.