Research into eye disease and preventing blindness is limited, despite large sums raised by charities and promising developments, particularly from stem cell advances and gene therapy

The top dozen blindness charities in the UK saw their income rise by a healthy 8.9 per cent in their most recent accounts, according to the Charity Financials database. That must be good news for those worried about their sight, surely?

Not so fast. None of the 12 is devoted to research into preventing blindness. Their job is to look after blind people, campaign on their behalf or, in the case of Sightsavers International, to deliver eyecare services in developing counties. The situation, explains Mike Daw of the National Eye Research Centre, is the precise reverse of that in cancer, where the biggest charity is devoted to research.

“They’re all creditable operations,” says Mr Daw, “but they’re all in support of blind and partially sighted people and don’t do research. We’ve worked out that the revenues of the three biggest UK eye charities are 40 times bigger than all the eye research charities added together.”

So while Guide Dogs raises £75 million a year with its images of adorable puppies, the UK’s biggest eye research charity, Fight for Sight, generated just £3.2 million in 2013-14.

The irony is that now is a really exciting time in eye research, with new possibilities arising from stem cell advances and gene therapy that could make a huge difference. Dolores Conroy, director of research at Fight for Sight, says the eye makes the perfect canvas to test these therapies because it is visible, not hidden like most organs. “It’s very easy to image the eye, you can track any changes and see what’s happening,” says Dr Conroy.

The world’s first embryonic stem cell trial is in progress at several centres including London’s Moorfields Eye Hospital. Results from the treatment, developed by US biotechnology company Ocata, so far show it is safe and may have improved vision in patients with the dry form of age-related macular degeneration (AMD) and a similar condition, Stargardt’s disease, which affects younger people. “This is really exciting, but we have to be careful,” says Dr Conroy. “It may take longer than we hope for therapies like these to reach the clinic.”

An alternative to embryonic stem cells is to take adult cells from the patient and reprogramme them to the embryonic state from which they can develop into any cell of the body. This could avoid rejection by the immune system. These induced pluripotent stem cells, as they are called, are being trialled in Japan, also for AMD.

At the Nottingham Centre for Eye Research, a project supported by Fight for Sight has been investigating how a class of stem cells found in the eye could be encouraged to produce new corneal cells to replace those damaged by disease or trauma. Such cells might be taken from the undamaged eye, grown in culture and then transplanted into the damaged eye to make a repair immediately after injury.

Gene therapy is another focus for research, used in a trial at the Oxford Eye Hospital to treat an inherited disease, choroideremia, which eventually leads to blindness. According to Professor Robert MacLaren, of the Nuffield Laboratory of Ophthalmology at the University of Oxford, who led the trial: “It is still too early to know if the gene therapy treatment will last indefinitely, but we can say that the vision improvements have been maintained for as long as we have been following up the patients, which is two years in one case.” A company, Nightstar, has been set up to develop the technology, with investment from Syncona, a subsidiary of the Wellcome Trust which operates as an investment company.

The range of eye diseases is huge – more than 100, according to Dr Conroy – and funds are limited. Even when Medical Research Council and the National Institute for Health Research spending is added to what the charities raise, the total represents no more than 2 per cent of total medical research in the UK. “When we consider the scale of the problem, it’s a drop in the ocean,” says Mr Daw.

Pharmaceutical companies are taking an increasing interest, partly inspired by the success of Roche’s blockbuster drug Lucentis for macular degeneration, partly by the new opportunities stem cells and gene therapy offer. Lucentis is only suitable for the less common “wet” form of the condition, but several drugs are now in clinical trials for the commoner dry form.

Novartis, which markets Lucentis in the UK, has since 2011 owned Alcon, the world’s leading manufacturer of eyecare products. Alcon has undertaken to spend $1 billion a year in eyecare research and development, and it is not alone. Eye disease has become a much more fashionable area of research investment, with many collaborations being struck between industry and academia. AstraZeneca and University College London have a project to develop regenerative medicines for diabetic retinopathy, while Pfizer has also paired with UCL, this time to develop treatments for AMD.

Given the ferment in the field, the relatively low level of public investment and the charitable deficit puzzles experts. “The only way we’ll treat sight loss is through research,” says Dr Conroy. “We need to lobby harder and get over to the public just how little the charities for the blind spend on research. We worked out that the top 18 eye charities had a total spend of £533 million. How much of that went on research? Just £4 million.” 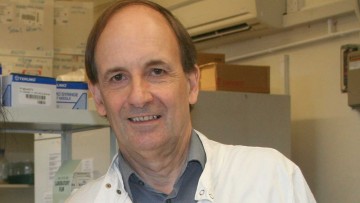 Based in Bristol, the National Eye Research Centre is a charity set up nearly 30 years ago by a professor of ophthalmology at Bristol University frustrated by the lack of money for eye research. To begin with it supported work in Bristol, but as it began to generate money it spread more widely and now supports research at many centres of excellence across the UK.

“One of our first achievements was in corneal grafting,” says Mike Daw, the organisation’s chief executive. “The success rate back then was poor, only around 50 per cent. People didn’t have the operation because they didn’t like the odds. The long-term studies we funded helped increase the success rate to over 90 per cent.” Today more than 3,600 corneal transplants are performed every year in the UK.

The charity supports research across the broad spectrum of eye diseases. An independent advisory committee ranks the projects submitted in an annual grants round and the charity’s trustees work out how many they can support, given the resources available.

Last year, the National Eye Research Centre had to decline support to £700,000 of worthy projects because of a lack of money. “We’re quite dependent on legacy income,” says Mr Daw, “and it can be quite volatile. Two years ago we had a near-record year, last year was not so good. It breaks our heart – they were good projects and patients will have to wait longer for new treatments.”

The charity supports research into gene therapy and stem cell therapy, and into eye diseases caused by immune reactions, such as uveitis, the largest cause of blindness in people of working age. It aims to fill a gap by providing pump-priming grants for research into proof of concept which, if successful, can enable researchers to bid for much bigger grants from other bodies for clinical trials.