When Gartner’s research vice-president Mario Faria said that by the end of 2019, 50 per cent of chief data officers would be seen to fail, it was hardly the stuff of recruitment posters. Yet Mr Faria also said that by that time 90 per cent of large companies would have a chief data officer (CDO) – a remarkable rise for a job that didn’t exist at the turn of the century.

Success is hard to judge, especially in a role that has yet to be well defined by industry, while failure can be starkly obvious. If your company is on the front pages for a major data breach or privacy violation, it’s a bad day to be CDO.

How do CDOs measure their success?

To find out what makes a good day, and how success can be planned for and measured, the views of two CDOs from two very different organisations, one in financial services, the other in scientific research, are informative. Both agree that the bottom line for success is in the overall health of the organisation; from there, things diverge.

Nic Orton is chief data officer for LexisNexis Risk Solutions, a global data analytics organisation that provides customer insight to the financial services sector and other industries. “The success of my role is considered in the ultimate performance of the business, but more directly I ensure we use the right data in the right way,” he says. “There is a consensus that the data universe is doubling every two years, with a 50-fold growth between 2010 and 2020. I promote innovation, but also ensure focus and trust.”

To that end, says Mr Orton, his success depends on creating a common language for data between business units inside the organisation, and thence out to customers and partners. “We have four main metrics: uplift to products through added value; insight and intelligence for ourselves on customers, competitors and markets; potential for advanced analytics; and quality.”

Quality is judged in seven dimensions, including completeness, validity and consistency. “When you see your language being used elsewhere in the organisation, it builds confidence that there’s clarity across the organisation, which means we build trust in ourselves that we are using data correctly,” says Mr Orton. “That becomes visible outside the organisation and builds trust in relationships.” In this way, governance stops being a hindrance to building a company’s use of data and starts to support it; a sign of a job well done.

Brenden Dalton, CDO and chief information officer for the Commonwealth Scientific and Industrial Research Organisation in Canberra, oversees data for more than 5,000 people engaged in disparate research. He focuses on managing data risk against opportunity. “The success criteria for a chief data officer need to flow from an organisation’s digital strategy,” he says. “If that pushes disruption, for example, then the CDO needs to work with a higher tolerance to data risk.”

Although CDOs have struggled to communicate the nature of data risk in the past, times have changed.  “With the help of Facebook CEO Mark Zuckerberg and his evidence to the US Congress, boards are coming to understand risk,” says Mr Dalton. “Data risk, particularly impacting reputation and social licence to operate, is a new and evolving area. Organisational governance models are slow to change and don’t yet appropriately support the CDO.” 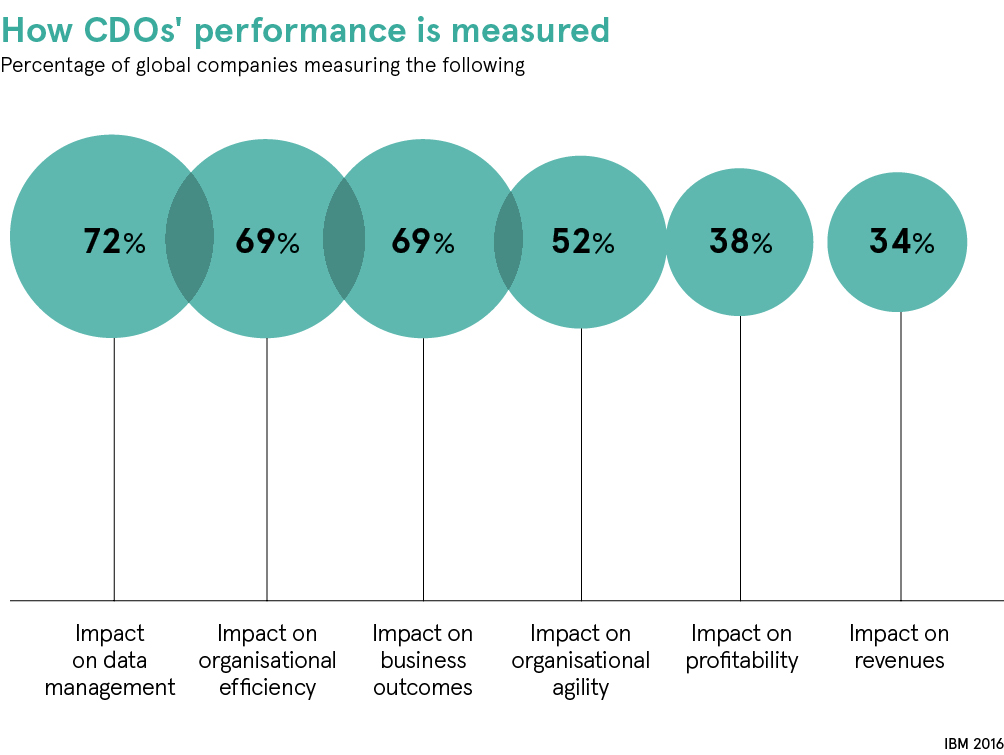 While he agrees that success in his role involves bringing different parts of his organisation into a common appreciation of the nature of data, his vastly more heterogeneous world has necessitated a different approach to that of Mr Orton. “Governance is a challenge. Each scientific discipline has its own way of doing data, so we need a novel approach, creating a network of data champions and encouraging each of our business units to institute its own data governance,” says Mr Dalton.

The chief data officer provides the tools for this, he says, such as high-level organisational principles and centralised ethics, privacy and regulatory compliance advice. “We’re building a data ecosystem internally and with partners, and we’re trialling a social architecture to support this.”

A successful CDO uses their imagination

So a successful CDO needs to unite an organisation in its appreciation of data risk and decide on the right level of oversight for business units, and how much freedom to give them. But a failure in imagination and innovation can lead to a perception of failure overall, according to Mr Orton.

“Here’s an example,” he says. “Your bank knows more about you than anyone else; when you buy coffee, who your energy supplier is, how much you get paid, what you like to spend money on. It’s a huge data asset, and by and large they do nothing with it. If I were a bank, I’d find ways to leverage that through app-driven recommendations, customer insight – the works.

“Instead, you just have the product division thinking about increasing monetisation and app designers thinking about user experience. The CDO should be able to see the entire business and suggest data-driven innovation.”

Mr Dalton has his sights set even higher, at entirely new levels of CDO innovation. “We are focusing on data management as a research activity in its own right, working through how we use the internet of things and artificial intelligence to create the future digital industrial platform. We are going to look beyond automating data ingestion, quality analysis, analytics and so on, to providing regulatory assurance, oversight and address social risk.”

Whether the ultimate success of the future CDO will be automating themselves out of a job is perhaps a more philosophical than practical concern, at least for now.