How much outsourcing is healthy in the NHS?

The NHS and outsourcing have an uneasy relationship. Lately it’s been getting worse. We recently had the People’s March for the NHS, campaigning against outsourcing, and drawing 5,000 people as it completed the 300-mile final leg into London. Lobby groups such as 38 Degrees and Keep Our NHS Public fight hard against private-sector involvement.

And the unions? Their opposition to outsourcing in the NHS could be described as fanatical.

Then came the failure of Circle’s healthcare partnership at Hinchingbrooke Hospital as evidence of what can go wrong. A scathing report by the Care Quality Commission rated Circle’s management of the Cambridgeshire hospital as “inadequate”. Children arriving at A&E were left “potentially unsafe” by lack of supervision at times. Patients told inspectors of being neglected by nurses.

Game over? Not quite. The NHS budget of £115 billion in England alone will mean the private sector won’t back off for long. And they may be invited back by necessity.

The NHS needs to find an extra £30 billion by 2020 or face financial chaos. Fans of outsourcing say it may be the only way for the NHS to survive. After all, private-sector firms depend on outsourcing to cope with cost pressures, demand spikes and new products. In a sense the NHS is already committed to outsourcing. Every stethoscope, CT machine and every single drug is procured from the private sector.

So is outsourcing on the wane in the NHS?

The data says not. The percentage of NHS budget claimed by outsourcers has risen year after year and shows no slowing. In 2006-7 outsourcing stood at 2.8 per cent of all services and rose steadily to 5.9 per cent last year.

Labour shadow health minister Andy Burnham has promised to redefine the role outsourcing will play should Labour win the general election in May. He says “there is a role for the private sector” and refuses to rule out the private sector from any part of the NHS. However, he sees the private sector as a supplementary facility to add capacity in a supporting role.

His objection to outsourcing? He says: “The market is not the answer. Why is not the answer? Because the market delivers fragmentation of care and the future demands the opposite, it demands integration of care. We need to free up the NHS to integrate, to partner, to merge, so it can make services, change services and make them affordable.”

Notably, he declines to place a figure on the correct figure which should be outsourced. “There isn’t a right percentage,” he says, stating that the decision to use providers should be made by clinicians based on patient need.

Sweden differs from the UK in a few important regards. The Swedish system delegates decisions to local government authorities, the 290 municipalities in 21 counties. They take care of provision and financing. Healthcare can account for 90 per cent of council activity. More than 70 per cent of funding comes from local taxation. 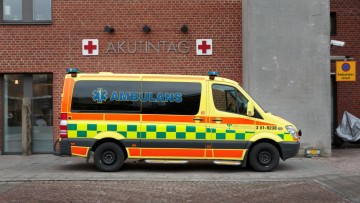 The Tory mission is to separate two issues in the public’s mind: that of who pays and who provides. Health secretary Jeremy Hunt’s speech to his November party conference focused on this theme: “Using a charity like Whizz-Kidz to supply wheelchairs to disabled children or using Specsavers to speed up the supply of glasses is not privatisation,” he said.

The real opposition to outsourcing in the NHS comes, then, not from the three traditional parties (nor from UKIP), but from a broad alliance of lobbyists, newspaper columnists and medical professionals who demand the current 5.9 per cent figure is reduced.

The Green Party is a vocal part of this alliance. Leader Natalie Bennett declared last year: “The profit motive has no place in the healthcare system. And we will not rest until we’ve expelled every last corporate bloodsucker from our NHS.”

Jillian Creasy, a former GP and the Greens’ health spokesperson, spells out why she and her allies are so opposed to outsourcing in the NHS: “The only way I can put it is that the NHS is a public service. I just think the ethos in what is generally a public service is very different to the marketplace.”

Intriguingly, Dr Creasy acknowledges that the NHS sources all drugs and all diagnostic tools from the private sector. “That is very true,” she says. “The extreme case would be communism. I don’t think we want to go that far. There is some place for innovation. But it is in the provision of the service, when it comes to seeing patients and the step behind it – deciding what can be done – that needs to be in a publicly run service.”

And what about social enterprises? Can they run public services? “I think there are two issues,” she says. “One is that a social enterprise is, in my view, better than a privately owned or shareholder-owned company as it is non-profit making. So NHS money is not leaking out into shareholders profits. With social enterprises we can assume, if it makes a profit, money is recycled back in.”

If outsourcers wish to tap into the NHS budget and help the service make the cost-savings it needs, it is the likes of Dr Creasy they need to take on. It will be a tough job.

Growth Strategies
5 ways to master agile collaboration
Leadership
Reviewing 2022 ⁠– business leaders reflect on a challenging year
Growth Strategies
Five big ideas for successful sales in 2023
Leadership
How leaders can win over agile working sceptics
Future of Work
What do generations Y and Z really want from work?
Leadership
Insights from the CEO who walked in on a cyber calamity