How best to make changes?

The business world faces many uncertainties, but one thing that’s constant is change. Organisations have to change to remain competitive, and the challenge for business leaders is to decide whether to go for wholesale business transformation and reinvent the organisation or to make small, incremental changes that evolve only certain parts of the operation.

According to a recent survey by Source Global Research, the majority favour business transformation. The survey of more than 600 senior executives and directors in UK organisations revealed that 82 per cent of organisations are already investing in, or planning to invest in, large-scale transformation programmes.

A responsive approach to change

Still, some favour a more responsive approach to change based on customer feedback. James Murphy, chief executive of communications agency adam&eveDDB, believes that businesses should take a leaf out of Uber’s book and take their cues for change from the customers they are targeting.

He says: “Ambitious businesses need to be constantly improving and creating a culture that fosters incremental change, so that you are improving in some area of your business at least every few weeks.

“This doesn’t mean just focusing on the latest tech and how you can adopt it, but changing your attitude and that of everyone in your organisation. As part of this, it is important to empower staff to come up with ideas rather than having a top-down management.” 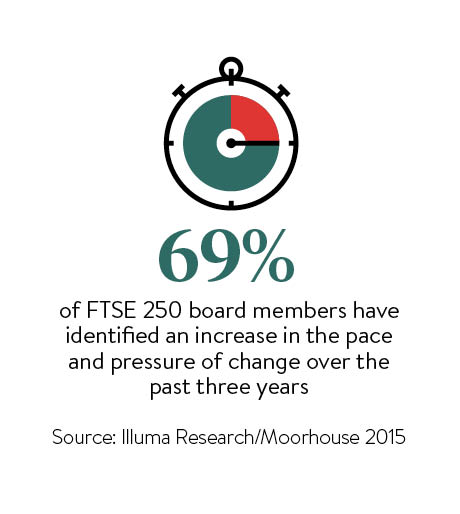 But business leaders who are inclined to make continuous small changes could be a making a mistake, according to Stephane Girod from Henley Business School, who along with Professor Richard Whittington from Oxford University has just completed new research into the potentially disastrous consequences of unplanned continuous small organisational change.

He says: “Executives reason that small changes pre-empt larger ones, on a ‘stitch in time saves nine’ principle. One of our major counterintuitive findings is that, in fact, small incremental changes can actually escalate into larger, more radical change. This effect happens even after controlling for more classic factors of large change, such as strategy, size and environmental change.

“In our study, small incremental change consists of changes to the boundaries of business divisions, by merging, splitting, transferring, closing or creating divisions.”

The research suggests that beyond a threshold, such continuous small changes are liable to trigger a potentially unintentional and even harmful radical organisational restructuring.

Far from always releasing pressure in the system, small incremental changes can be a pre-shock setting off a large-scale eruption, says Dr Girod. He points to successful companies, such as Google, Dow Chemical and Accenture, that recognise it is better to resort directly to more radical organisational change occasionally when significant internal change is necessary, than tweak the organisation a lot.

“But it doesn’t mean these companies shun smaller incremental change either,” he says. “They continuously shift some divisional boundaries to be agile, but they pace these changes and tend to avoid sudden gluts of smaller changes. In this sense, their choice is more than ‘either or’, it’s also about how much of the smaller changes they need to stay agile and think they can cope with.”

Yet some companies have chosen not to transform their businesses completely and instead have evolved processes and operations more subtlety.

Juan Pablo Luchetti, director of business consultancy Mubaloo, has worked with a number of them, including stock photograph agency Alamy. The company launched Stockimo, an iPhone app that simplified the way people uploaded their mobile photography to the Alamy network, which publishers and news organisations can now buy.

“It was responding to change in the market, without disrupting its business model,” says Mr Luchetti.

However, one of the companies that he most admires for achieving large-scale non-disruptive transformation is Procter & Gamble.

He says: “It has the biggest R&D team in the world right now because of its approach to crowd collaboration for solving issues. The company puts a challenge on a web page where third parties or individuals can log in and see what the challenge is. Given a clear objective and price, they go away and try to solve it. It was responding to change in the market, without disrupting its business model.”

In planning a change strategy, organisations also need to consider the potential impact on their people.

Matt Guest, Europe, Middle East and Africa head of digital strategy at Deloitte, says: “It is crucial to understand the drivers of value, to quantify them and then to target them with transformation prototypes. Incentives for people in the organisation should be set to help them adapt to the transformed model. If you don’t have a link of personal incentive to true value, then the chances of success are diminished.”