It used to be said there were only two certainties in life – taxes and death. Until recently, there was hopefully a third – retirement. But thanks to the removal of the default retirement age, even this once-sacrosanct expectation is under threat – and it’s bad news for employee engagement.

And yet here’s the problem: “The vast majority of those continuing to work are doing so not because they want to, but because they cannot afford to retire,” says David Blake, professor of pension economics at Cass Business School. He believes there’s a huge engagement issue looming in firms being stuck with staff who don’t want to be there, but can’t be exited either. “Bosses face a very rude awakening,” he says.

With the link between disengagement and low productivity well known, it may sound paradoxical, but the best way for employers to engage staff is ensuring they can leave at their chosen retirement age. “It doesn’t benefit firms to have people who don’t want to be there,” argues Professor Sarah Harper, co-director at the Oxford Institute of Population Ageing. “But too many HR departments see retirement as an event rather than a gradual process both should work towards.”

Professor Harper argues that the taboo around talking about finances needs to go, so a phased approach to retirement, such as by altering roles or hours worked, including getting retrained, can be agreed. The University of Wolverhampton recently found firms facing just a 1 per cent rise in staff aged 50-plus are 29 per cent less likely to boost productivity, because older staff are passed over for promotion or training causing demotivation.

“I now work three days a week,” says 66-year-old Mike Dyer, who has had a new role created for him by his employer, Sodexo, when he didn’t want to retire at 65. “Ironically, I handle staff engagement, including running our Investors in People reaccreditation,” he says. “For me, carrying on has been a massive boost to my own engagement, but I’ve grown my division’s engagement by 12 per cent since last year, so it’s win-win.”

Although Mr Dyer says he could have afforded to retire, he argues staying has enabled him to plan better. He says: “For the last two years I’ve been able to reduce my spending and quadruple what I’m paying into my pension. It’s put me in a much better fiscal place when I do retire.”

“They may have more time, but retireability is a huge issue for younger people,” says Keith Sully, head of pensions at Intercontinental Hotel Group (IHG). It’s why IHG this year began rolling out a financial modelling tool from provider Wealth Wizards, where staff can set different saving rates, retirement age or income targets and see what they need to save to achieve it. 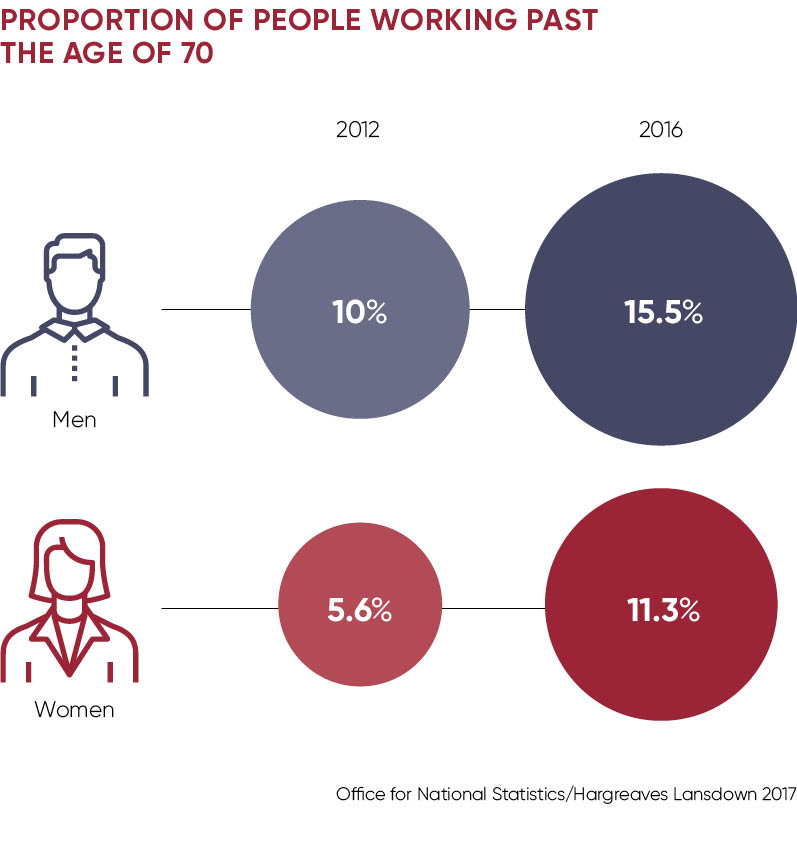 “Those aged 30 to 39 are our biggest cohort and getting staff to model their pension pot size has been a game-changer,” he says. “We had a 40 per cent response to our financial education seminar and of these 20 per cent took up the tool. Most have boosted pension saving to our maximum total contribution level of 12.5 per cent of earnings because they can see how making small changes now really impacts being able to retire when they want. It has massively boosted engagement.”

But while there are always firms ahead of the curve – IHG also plans to trigger communications to staff if they look unlikely to meet their retirement age or income targets – the bad news is that not all are responding this way. A recent poll by Capita Employee Benefits found half of employees said financial planning is the benefit they need to help them save for retirement, but research only last month by financial adviser Chase De Vere found 29 per cent of employers still thought workers’ financial affairs were their own responsibility.

Perhaps because employees now have on average 11 different jobs over their careers, employers aren’t incentivised to offer costly financial education. But Professor Blake argues it’s short-sighted. “Employers all need to agree the retireability of their staff is important for the time they’re with them. It’s not fair that one doesn’t do enough, leaving the next employer to make up the shortfall,” he says.

According to Canada Life, 73 per cent of staff expect to work past the traditional retirement age, so employers don’t have long to act. “If we’re not careful, the whole issue of retireability will be the next wave of workplace presenteeism,” says Michelle Bradshaw, compensation and benefits director for the UK, Ireland and Israel at Oracle.

Ms Bradshaw has already put more than half her staff through its financial education programme with partner Secondsight. She argues that more employers need to follow suit. “With the right information, people can and should retire happy,” she says. “We’ll be heading for a car crash if it’s not got on top of now.”