When Facebook and Twitter accused the Chinese government of spreading disinformation about the pro-democracy protests in Hong Kong, they made an ethical stand against social injustice.

In August the social media giants removed thousands of state-backed accounts that sought to discredit protestors as violent and extreme, and were “deliberately attempting to sow political discord in Hong Kong”, according to a statement from Twitter.

For Twitter at least, the decision was seemingly an easy one to make. Not only did China’s campaign violate its policies of spam and fake activity, Twitter is blocked in the communist state – many of the accounts accessed Twitter using VPNs – giving the platform the freedom to take whatever action it sought necessary to crack down on illicit activity.

But would that decision have been as simple if, for instance, the illicit activity had originated from a political party in the United States, where the result of making a stand against a government may have more serious corporate ramifications? Perhaps not.

The platform already has a complicated relationship with Donald Trump, whose tweets often violate its terms of service – notably the parts about abusive, threatening and violence-promoting content. Would banning him, as so many have demanded over the years, result in retaliation from the president, who is known to wage personal attacks on companies that publicly challenge him?

Of course, this is only a hypothetical scenario – Twitter could have banned president Trump by now, if it wanted to – but the delicate balance between doing what’s ‘right’ and what’s good for business is a line that is becoming increasingly difficult to toe.

When it comes to social injustice, business leaders can no longer watch from the sidelines. At a time of such geopolitical volatility and social unrest, there is an expectation to take action, not only from their employees, but their customers, investors and wider society.

“Ethical decision-making is what sets leaders apart – the CEO that leads, versus the CEO who succumbs to adopting the path of least resistance,” says Rita Trehan, business transformation expert and founder of Dare Worldwide Consultancy.

There is no shortage of examples when it comes to companies taking a public view on heavily politicised issues, such as Airbnb and Starbucks, whose leaders publicly condemned Donald Trump’s travel ban against seven majority-Muslim countries in 2017.

“Trump’s own history of making personal attacks on businesses made it difficult for brands to react to, many of whose globally-minded leaders were personally outraged,” says Giles Gibbons, a founding partner and CEO of strategy consultancy Good Business.

Despite the risk of backlash, Airbnb responded by offering free accommodation to anyone affected by the ban, and Starbucks offered free legal advice to employees and promised to hire 10,000 refugees over the following five years. While lauded by many, the moves were also met with threats to the business – #boycottAirbnb and #boycottStarbucks both trended on Twitter – along with attacks from a number of right-wing commentators.

“In many ways, however, this served to make the statements more meaningful. It felt like a genuine demonstration of audacity by business leaders and it showed a willingness to stand up and be counted for a hard-held set of values and beliefs,” Mr Gibbons says.

Profit is no longer king

After all, business leaders’ sense of social conscience has never been greater, and “profit is no longer king”, according to Philippa Sturt, managing partner at law firm Joelson.

She highlights Nike as a key example of a brand embracing this change, following the brand’s ads last year featuring American footballer and activist Colin 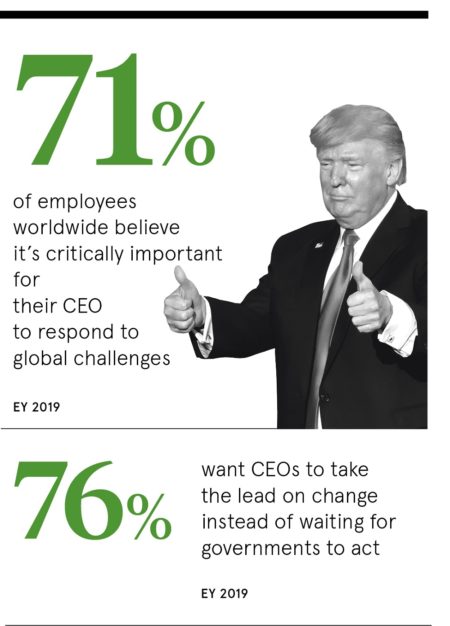 Kaepernick, who controversially left the NFL after refusing to stand for the pre-game national anthem in a protest against social injustice and police brutality. The ad read: “Believe in something, even if it means sacrificing everything”.

“By embracing Kaepernick, Nike have elected to take both a social and political stance, knowing full well it may isolate a considerable portion of their US consumer base,” Ms Sturt says.

Even then, Nike’s stance is still complicated, following its move to extend the deal as the NFL’s official uniform supplier to 2028.

Dr Simon Hayward, CEO of leadership consultancy Cirrus and honorary professor at Alliance Manchester Business School, says authenticity and values are all a part of being a business leader in today’s world, and society now demands employers to have a “higher code of ethics than simple commercial self-interest”.

He says: “In recent years we have witnessed a breakdown of trust in organisations following many high-proﬁle cases of mis-selling, mis-reporting and corruption. In some cases, the consequences have run into billions of pounds in damages and stock market value write-downs. Corporate amorality is a costly business.”

This risk of doing nothing means modern CEOs have to be active role models of ethical leadership, whether they like it or not. But when their political views do not align with those of their employees or corporate partners, how are they supposed to take a stand and please all stakeholders at the same time, particularly when those decisions could have a negative impact on the business?

For example, pulling out of a certain market or region to make a stand against injustice – such as government policies or environmental concerns – may be seen as the ‘right’ thing to do, but would shareholders feel the same if that move hit the stock price? Would employees rejoice if it resulted in job losses?

It’s this multi-stakeholder management dilemma that can be “paralysing” for business leaders, according to Andrew Kakabadse, professor of governance and leadership at Henley Business School. He says leaders have to consider a wide range of stakeholders, from the large investment funds, which often pressure companies to work in low-cost environments in order to maximise revenues, to trade unions, pension funds and public entities such as large religious institutions.

“Only few companies make social injustice a critical aspect of their strategy. Even some of the most ethical companies who address corruption and bribery often close their eyes to social injustice matters because of the overwhelming level of injustice incidents that arise in so many countries and the inability to address these,” Professor Kakabadse says.

“In the absence of governments taking a meaningful position on these matters and with a high number of countries that continue to exercise social injustice, shareholder pressure on companies is the overwhelming influence that allows trade with these nations to continue.”

A new form of capitalism

Alexander Pepper, a professor of management practice at the London School of Economics and Political Science, says that Noble prize-winning economist Milton Friedman’s doctrine, that a business’s sole responsibility is acting within the law to increase company profits, is increasingly being called into question. “But multiple corporate objectives create their own problems,” he says.

“The corporate world is changing in the face of public outrage, consumer demand, and government pressures. But there is much work to be done by companies, governments, and business academics in order to fully understand the inter-relationship between environmental, social, governmental – and financial objectives,” Professor Pepper says.

Tensions surrounding this ethical leadership debate are on the rise, and come at the same time when societies around the world are growing ever more divided, Mr Gibbon says. But it’s not as simple as asking business leaders to follow their hearts and take stands on issues that challenge their personal values. “The reality has to be more nuanced than that,” he adds.

“Businesses shouldn’t stop being businesses when it comes to how they consider social and environmental progress – they should make rational, not just emotional, decisions,” Mr Gibbon says.

But there doesn’t always need to be a trade-off between ethical decisions and corporate financial performance. Richard Burrett, chief sustainability officer at the sustainability-focused private equity firm Earth Capital and a fellow of the University of Cambridge Institute for Sustainability Leadership, says the whole conversation needs to be turned on its head.

“It would be flawed to assume that for businesses to adopt the role of an environmentally and socially responsible white knight that a sacrifice in performance must be made… We need to redefine what ‘good’ or even ‘profitable’ business is. Making ethical decisions should only be regarded as a positive approach.”

Yet, while there will always be certain tough decisions to be made, Mr Burrett says that when it comes to corporate ethics and sustainable business practices, leaders who take a stand “will now simply be joining the growing choir”.

“The challenge is whether capitalism can transition to more sustainable capitalism – one that recognises, in its decision-making, a wider range of essential issues.”