What was once a predominantly male-dominated industry now offers a wide range of opportunities that appeal to other groups. Two in particular, female franchisees and younger franchisees, have been making their presence felt in the sector.

The British Franchise Association Franchise Survey 20151 shows the number of young people entering the franchise sector is increasing, with a fifth of new franchisees joining in the last two years, aged under 30.

Although statistics from the same report show a fall in the proportion of female franchisees, down to 23 per cent from 28 per cent in 2011, this isn’t an accurate picture of female participation as many women are now running franchise businesses with their spouse or partner, a trend that has been increasing over the years.

Behind this shifting participation demographic are changes in the industry itself. Recent years have seen it become more attractive and more accessible to different groups, while also offering them more choice.

Our franchisee base is diverse, with people coming from different backgrounds and cultures, much like the wider UK population

Carl Reader, affiliate chairman at the British Franchise Association (bfa), says: “Certainly there is more choice available to prospective franchisees. Over the last few years there has been an increase in lower-investment franchises, particularly tuition franchises, which has helped younger franchisees with their affordability. These franchises are often of an amount that can be fully funded by a personal loan or savings.” 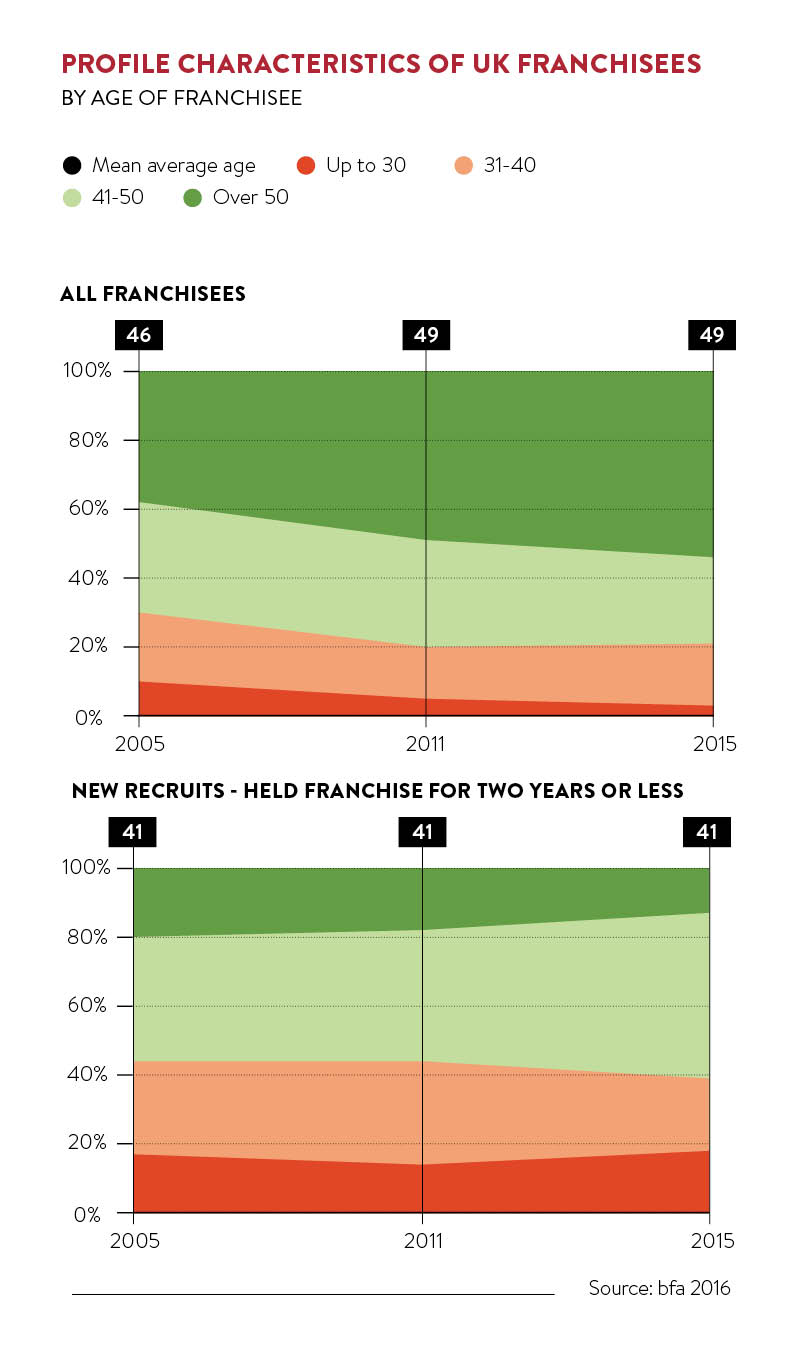 Clearly aware of the benefits of diversity within their franchise network, in selecting the right franchisees, many franchisors have taken a broader approach to recruitment.

Scott McLeod, operations director at Domino’s Pizza, says: “When choosing Domino’s franchisees, we look for entrepreneurial spirit, rather than focusing on an individual’s age or gender. Our franchisee base is diverse, with people coming from different backgrounds and cultures, much like the wider UK population.”

Raising awareness has always presented something of a challenge for the franchising industry, but things have improved in recent years thanks to a number of new initiatives, including the bfa’s Women in Franchising initiative and the Encouraging Women into Franchising (EWIF) initiative.

Linda Price, co-founder of swimming lesson franchise Swimtime and chairwoman of EWIF North, says: “The franchise sector has undoubtedly become better at promoting itself as a viable business option and to an extent there has been an organic increase in women in franchising.”

She describes the modern franchise industry as more female friendly, with greater access to support from a female perspective.

“I’ve met women involved in a wide variety of sectors from the more stereotypically feminine elderly care and children’s activities, to slightly less glamorous businesses such as chimney sweeping and drain unblocking,” she adds. “What is clear, though, is that women across all sectors have the appetite and ambition for business growth.”

The entrepreneurial spirit of the so-called millennial generation, those aged roughly between 18 and 34, and their desire to be in control of their work-life balance are among the reasons why franchising is attracting younger franchisees.

The biggest entry barrier for this group is access to business funding. However, younger franchisees are often helped by family members, not just in terms of the finance they need, but also in gaining a foothold in an actual franchise business.

Mr McLeod says he has seen many of their Domino’s Pizza franchisees involving their children in the business from a young age. “They are educating the next generation and establishing a succession plan so their franchise business can continue to be successful long after they retire,” he says.

An abundance of lifestyle-type franchise opportunities, such as dog walking and children’s entertainment, provide the flexibility for combining business and family life, and have huge appeal for women and younger people.

But participation is shifting within larger management franchises, such as recruitment company Driver Hire, where there are opportunities to build businesses of significant scale.

Chris Chidley, chief executive of Specialist People Services, which owns Driver Hire, says: “We have seen a shift in the demographics of our franchisees, with more women and younger people joining the business in recent years, and the changing face of the transport and logistics sector is a factor in this.

“For us specifically, I think the rise of e-commerce has played a part. Not only has it supported the growth of the logistics sector, it has made the wider industry more visible to the everyday consumer. People who may never previously have thought about logistics can now see the vital role this industry plays in the UK economy.”

Another factor in this shifting of participation trends is the way that franchisees themselves are seeing opportunities for business growth.

Julie Waites, a founding partner at franchise consultancy The Franchise Company, says: “Across the franchise spectrum, low-investment franchises can be an entry point to the industry and also a platform from which franchisees can trade up to the higher investment level brands, such as Domino’s Pizza and McDonald’s, where we are now seeing more very successful female franchise owners.”

Nevertheless, the bfa’s Mr Reader insists more could be done to engage future franchisees from all demographic sectors and suggests the US approach to franchising could be the way to encourage even greater diversity.

“Their Next Gen programme is an educational foundation that promotes the education and recognition of franchising in the education system, and provides scholarships, competitions and other initiatives to drive engagement among the younger community. They also have the VetFran initiative from which we could learn to increase participation from ex-military after their resettlement,” he says.

“Given these opportunities, together with our drive to increase the female engagement with franchising, I hope the diversity within franchising will continue to improve.”

1Survey carried out with NatWest

In 2011, Anneli Thomson became the youngest franchisee of sales and management training company Sandler Training when, at the age of 26, she took on the Oxfordshire franchise.

She was also making the transition from employee to franchisee, having joined the company at the age of 21 as marketing assistant.

Before that, while at university, she had started and run an online lifestyle business, StudentFizz, a go-to hub for students to search offers and nights out across the UK university network.

She says: “I could have started a business development consultancy, but this would have been less lucrative as it would have taken much longer to establish. I would have had to develop all the content, written materials and intellectual property from scratch. A franchise offers access to a global brand as well as tried-and-tested systems that can be applied across a variety of business types and industries.”

Her business has flourished with year-on-year growth of 36 per cent for 2014-15 and a turnover of £380,000. She was also named Sandler Training’s Outstanding Franchisee of The Year in 2015. And alongside her commitment to growing her business, she is still able to enjoy the lifestyle she wants.

She says: “I have a great work-life balance and enjoy a variety of hobbies, including skiing, ice climbing, writing and triathlons. I also ensure that I have one week out of every eight off, which I manage by scaling my workload during the other seven weeks.”

A future exit strategy has also been given some thought. “I would go to the main franchisor and work with them to find an appropriate buyer. The key would lie in scaling the business prior to sale so that the buyer was confident they were buying an organisation,” she adds.

Sarah McLean began her McDonald’s career more than 34 years ago and has been a franchisee for the last 14. She now runs 13 restaurants across Staffordshire, Leicestershire, Derbyshire and Warwickshire.

Her restaurants contribute £13 million to the local economy and she employs more than 1,000 people.

She says: “My aim in running multiple restaurants is to remain hands-on and to continue to be the gatekeeper of standards. I strive at all times to be one of the best and I am my own greatest critic.”

Over the last five years she has achieved sales growth of 39.16 per cent, which is a combination of organic growth, and the acquisition of other franchises and company restaurants. Organic growth for the first quarter of 2015 was 7.54 per cent, placing her group at the top of the league of all large franchisee organisations in the UK.

She says: “One of the benefits of being a franchisee that I hadn’t anticipated before becoming one is the capacity I have to use the business to support my personal values.”

These include her involvement in supporting fundraising for the Ronald McDonald House Charity and helping to improve the local environment where her restaurants are based, through organised litter picks with other interested local groups.

“Last year we evolved this with local planting and providing small bird, bat, owl and hedgehog boxes to each local authority as longer-term legacy projects,” she says.

“Supporting the reinvestment into my restaurants is my dedication to striving for the highest operational standards,” she adds.