As if the language is not enough of a barrier, anyone planning to do business in Japan should consider learning how to “read the atmosphere”. The idea may make no sense for a Westerner, but the Japanese even have a catchy expression – kuuki yomenai – to describe the inability to perform this vital social task. In short, it means that a person is required to grasp what their Japanese interlocutors intend to do even if they do not say it aloud. Because very often they will barely utter a word.

Reluctance to express a view unless formally invited to do so is among apparently odd behaviour British entrepreneurs stumble upon when they do business with Japanese companies. And the experts warn that being aware of this kind of subtlety could decide whether a business relationship gets off to a good start.

The old belief that, when it comes to business, money is the only language that counts often misses the target

When a Japanese or other east-Asian professional remains silent in a meeting, it does not mean they are not prepared to answer questions or are introverts. It may just be they will not engage in behaviour that at home could be considered disrespectful or even rude. Reading the atmosphere and spotting someone wants to contribute to the conversation is a must, therefore, to ensure potentially valuable contributions are not lost.

Dealing with cultural differences of this sort has become evermore important for companies as they expand their presence worldwide. Many have discovered that the old belief that, when it comes to business, money is the only language that counts often misses the target by a large margin.

Erin Meyer, associate professor of organisational behaviour at INSEAD, a Paris-based business school, says that in countries such as China business tends to run much more smoothly if a trust-based personal relationship is built before the hard numbers are discussed. When meeting Chinese businesspeople, jumping headfirst with flashy PowerPoint presentations and promises of world-beating discounts, without engaging in social niceties first, can kill off the whole negotiation process.

“It does not matter how low your price can go,” Ms Meyer says, “if a Chinese businessperson does not trust they can do business with you, the deal will not happen.”

In many non-Anglo Saxon cultures, building trust is a major part of business negotiations in a process that can sometimes baffle the most pragmatic sales professionals. The French and Spaniards, for example, like to take extended business meals where business is barely mentioned, if at all. They will talk about the food, the wine, football or family in leisurely lunch breaks that may sound like a waste of precious time for a Brit or American, but which in fact work as an instinctive way to assess the reliability of associates.

“In Mediterranean countries, people take time to know each other before they start talking business,” says Tamiko Zablith, a consultant in business etiquette. “If you approach business subjects too quickly, other people can be turned off. They may think you are only there for the money and do not care about people.”

In some Asian countries, gifts are wildly employed to help build up relationships. In this case, however, you should be careful not to fall foul of anti-bribery rules by gifting valuable items or to offend your contact by handing an inappropriate token of appreciation. For instance, giving a watch to a Chinese person could be interpreted the wrong way as a timepiece symbolises death in their culture. To make matters worse, if the watch is an expensive one, it could be construed as a bribery attempt by authorities in the UK or US.

Acting with sensibility and adding a human touch to a gift can be better and safer than being lavish. Ms Meyer mentions the example of one of her clients, a British manager who worked in Indonesia, where personal trust-building is much more of an issue than in the UK. “His team members asked about his children, and he said his daughters liked horses and also stickers,” she says. “Within a week, he was presented with a beautiful package of horse stickers by his co-workers. That is the kind of gift that counts a lot in a relationship-oriented society.”

The impact of globalisation

Ms Meyer notes that as business become more and more globalised, businesspeople become more tolerant of faux pas committed by foreigners. “Today we recognise that people eat their food differently, handle their business cards differently or have different ways of shaking hands,” she says. More to the point, however, is the effect that cultural differences can have on the productivity of companies. Failing to understand the behaviour of associates can lead to inefficiencies and even botched deals.

Michael Landers, a San Francisco-based cultural consultant, tells the tale of a British hotel group that was negotiating a large deal with a South Korean technology giant, whose executives had to reschedule a key meeting several times. When the meeting finally took place and the contract was about to be signed, the negotiator representing the British group – an American – joyfully said the process could have been finished much earlier if there had not been so many postponements of meetings. “The Korean executives did not understand why he had to mention that publicly, they felt disrespected and the deal was called off,” he recalls.

Sometimes even acts that look like obvious signs of politeness can work against the good progress of a partnership. “The British often apologise,” Ms Zablith points out. “In some other cultures, it could be seen as a weakness.” This disconnect puzzled researchers who decided to delve deeper by studying what “I’m sorry” means to Americans, who are not keen on apologising, and to the Japanese, who do it all the time. The researchers concluded that, while Americans view apologies as personal admissions of guilt, in Japan people are more concerned about the consequences of a particular event to the group. Thus, when they say they are sorry, they express an eagerness to repair a damaged relationship.

On occasions, dealing with cultural issues can prove challenging. For example, in some parts of Saudi Arabia women are expected to “dress modestly”, a definition that precludes even wearing jeans, and male professionals may refuse to shake hands with their female peers. Ms Zablith advises that it is important to try and understand the culture.

“In some parts of the Middle East, there might be gender issues. If we know that in advance, we can prevent crossing a line that makes other people uncomfortable,” she says. “Sometimes our social skills may take us much further than our technical skills.” 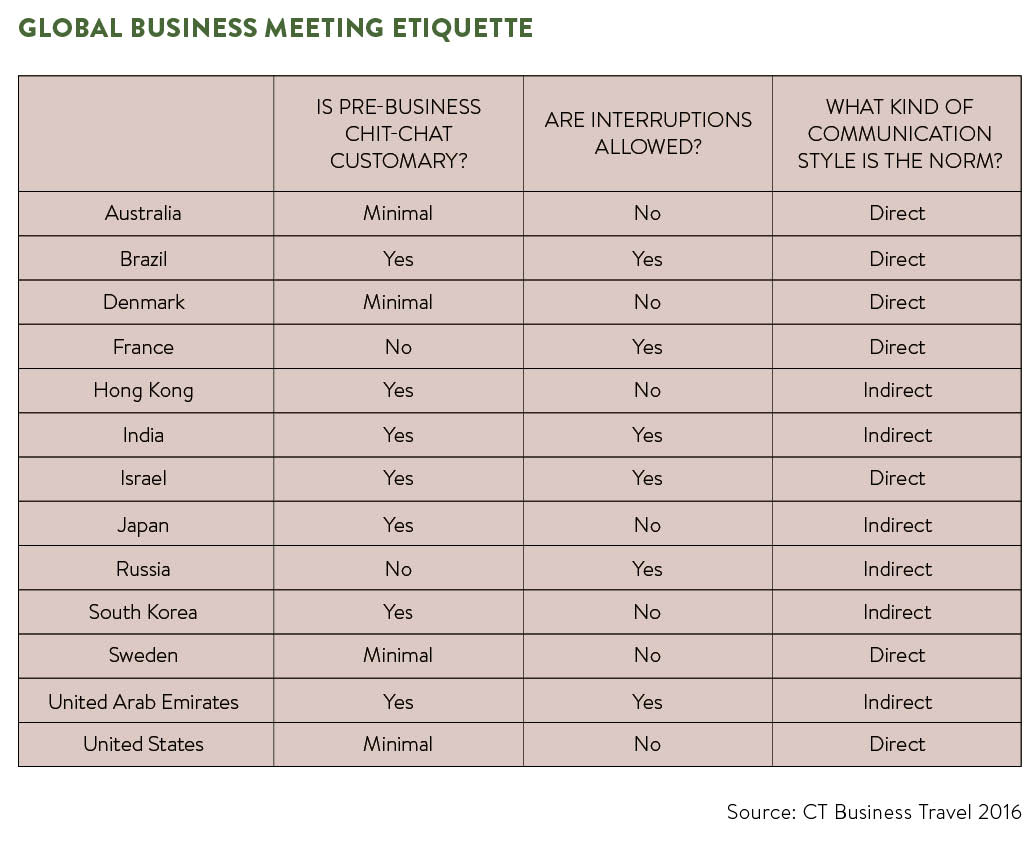