In the post-war period to the turn of the century Britain exported a lot of quality stuff. From The Beatles to Brit Pop, Rover to Rolls-Royce, education, sport, film and fashion. If it was made in Britain you could shift it almost anywhere.

British heritage was a major draw, as was the country’s perceived commitment to quality, yet throughout this period there was a glaring omission in the range of things foreigners wanted to buy from us. You guessed it – food.

A perfect storm of war debt and an obsession with convenience created an unholy culinary mess across the country, perpetuated by the rise of supermarket shopping, in which the people of Britain choked and gnawed for 50 difficult years.

Domestic kitchens shrunk to provide space for TV-watching in the lounge, people resorted to decorating their creations to increase dinner party appeal and, latterly, the popularity of microwaves reached epidemic proportions. It was an unhappy time for epicureans.

Lord Karan Bilimoria, founder of Cobra Beer, arrived in the UK in the 1980s when food quality had bottomed out. “I went to a British boarding school in India and I had the misfortune of eating British food on a daily basis – it was far worse than the other food that was available.

“Whenever I could, I would escape to the town and fill up on Indian food, which would have to last me the rest of the week.”

As late as 2005, Britain was still receiving pot-shots about its nosh, notably from then French President Jacques Chirac who, while leading the country’s bid to host the 2012 Olympic Games, said: “After Finland, [Britain] is the country with the worst food.”

The rise of British haute cuisine

It would have been a low blow in 1980, but in 2005 it was downright inaccurate. Britain had stopped the rot some time before. Today, it has a host of Michelin-starred restaurants – 17 new ones in the class of 2016 alone – and its food brands, from basic to gourmet, are famous around the world.

“Britain is now one of the best places to do business in the world,” says Lord Bilimoria. “Anyone can succeed regardless of race, religion or background. Britain’s economy and growth rate are the envy of Europe.

“As a result of that, London is now a global food capital and the finest cuisine of all kinds is available – original English food is outstanding, not to mention foods from around the world available here.”

The impetus for the country’s food boom is on two fronts – people arriving in the country to show us how it’s done and our most media-friendly chefs, spearheaded by Gordon Ramsey and Jamie Oliver, doing a great job of selling “Brand Britain” overseas.

Six-year-old restaurant chain MEATLiquor, which has seven outlets in London, Leeds and Brighton, and a new venue in Singapore with two more planned in Asia, is a British restaurant brand with global ambition.

Co-founder Yianni Papoutsis says Britain is benefiting from societal and cultural changes. “The opening of trade barriers has made once hard-to-find ingredients ubiquitous, and the easier movement of people has brought new skills and techniques to these shores. The globalisation of information in the form of the internet cannot be overstated either,” he says.

Mr Papoutsis and co-founder Scott Collins say they have tapped into existing demand in Asia and the Middle East for British-made goods of all descriptions. It’s a fact borne out by the experience of Mash Direct, which sells prepared vegetable side dishes and has experienced significant demand from Arab states.

“The turning point for the international side of our business came in 2012, at a Paris food exhibition, when we were approached by a distributor from Dubai,” says Martin Hamilton, managing director of the business, which has sales of £14 million a year, 16 per cent of which go abroad.

“We were thrilled, but quite perplexed, when after sampling our products, he told us that mashed potato was something that would sell well in the Middle East. Up until that point it was a market that never would have even crossed our minds.”

The team translated packaging into Arabic and soon Mash products were being stocked in Spinney’s, the United Arab Emirates’ equivalent of Waitrose.

“The success of our products in the UAE came as a surprise to us. Our core customers are British expats who want a taste of home, but our Chilli Baby Bakes – baby potatoes coated in a fiery chilli marinade – have grown increasingly popular with Dubai locals, due to the potatoes’ spicy coating,” says Mr Hamilton.

Uri Baruchin, strategy director at design consultancy The Partners, worked on the government’s “Made in Britain” campaign, helping manufacturers identify themselves as British and benefit from the glow. He found some markets respond better to the Union Jack than others.

“Europeans have a much stronger sense of pride in their own cuisine traditions,” he says. “They are much more reluctant to give up on cultural stereotyping – in the same way the British won’t let go of their views on the French.

“Americans, on the other hand, have a fascination with Britishness and a strong emotional response to British accents. We have the BBC to thank for that. In Japan, Britishness is almost fetishised. It is [designer] Paul Smith’s biggest market for this reason.”

But it’s not as if the French automatically bat back anything edible we try to sell them. Government figures show cheese exports climbed 7 per cent in 2014, but zoom in on France and the figure rises to 20 per cent. It looks like Brits should revisit our clichéd view of French stubbornness.

And it’s not just the “Great Britain” label that does well abroad. In markets where the GB badge is considered unremarkable, such as Europe, brands playing up their locality within the UK can still gain traction.

The Chocolate Café, headquartered in Ramsbottom, Lancashire, sells a range of tempting artisanal chocolate bars. It recently switched from supplying high street brands wholesale to targeting consumers direct through its website. The orders are lower, but the margin is higher and the brand has more scope to grow.

In its first year selling online, it expects to shift 5,000 units. Beyond UK borders it is experiencing demand from America, Canada and Australia, but its biggest international market is France.

“The products that export well are the ones that are the most regional,” says Paul Morris, managing director of the brand, which mixes fine Colombian fino de aroma cocoa with premium British ingredients. “Our Manchester tart bar is very popular, for example. We are now developing a range of chocolate bars to capitalise on this which will launch in early-2016.”

To this day, being made in Britain gives products an edge on the global stage. But British food, for so long mocked by people who did it better everywhere else, is gaining popularity due to the principles of quality that underpin the Made in Britain label, not the label itself.

Launched as MEATWagon in 2009 and inspired by the street food phenomenon that made its way to UK cities from Asia, MEATLiquor is a restaurant concept based on no-nonsense dining in large venues adorned with graffiti. 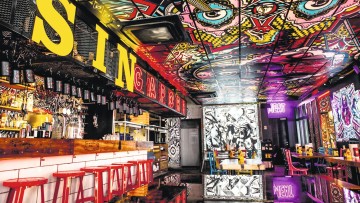 Having experienced quick success across England, the founders have branched out overseas beginning, unusually perhaps, with a new location in Singapore.

The restaurants’ menu, described as “rough and ready”, has proved popular throughout the UK and the business is expanding rapidly. Venue seven opened in Islington in October and number eight launched in Bristol in November.

In June, the company launched what it describes as an “international outpost” in Singapore, a 100-seater site in the Duxton Hill area. It is a joint-venture with Jacques Dejardin’s The Blind Group, which operates restaurants and bars in Singapore, including Oxwell & Co and Operation Dagger.

Co-founders Scott Collins and Yianni Papoutsis explain their reasons for picking Singapore over other destinations: “The airport code of SIN alone suggested this might be the place for us. Three days of eating and drinking later, our suspicions were confirmed.”

Despite the group’s unusual approach to market research or perhaps because of it, the venue has been a success, so much so there are now solid plans for at least two more eateries in Asia in the near future. The team are looking for other sites in Singapore, Thailand, Indonesia, Malaysia and Hong Kong.

“Internationally, there would appear to be a form of prestige associated with quality British brands. Currently, we’re seeing strong interest from the Middle East and Far East,” says Mr Papoutsis. “I’d like to think we’ll see more small brands evolving and getting the backing and support to fully explore their potential. I also think we’ll see a few huge, British-based international ‘juggernauts’ emerge over the next few years.”

Also inMade in the UK

Why Britain can still call itself great

Also in Made in the UK