The topic of employee rights in the “gig economy” has been all over the headlines lately. Concerns have been raised over the use of agency staff at online fashion retailer Asos, the treatment of couriers at parcel delivery firm Hermes and the status of people working for so-called sharing-economy companies such as food delivery service Deliveroo.

As a result of such controversy, government has been prompted to act. In October, prime minister Theresa May asked Matthew Taylor, Tony Blair’s former policy chief, to undertake a six-month review of how current employment practices need to change in order to keep pace with modern business models.

The Business, Energy and Industrial Strategy Committee also launched an inquiry into the future world of work, focusing in particular on the pay and working conditions of people employed in non-traditional ways, including gig-economy workers.

Although there is currently no standard definition of what a gig-economy worker is, the term is generally used as shorthand for temporary labour, covering everyone from freelancers and contractors to agency staff.

Coming in from a slightly different angle, meanwhile, HM Revenue & Customs (HMRC) has also joined the fray. It has set up a specialist unit to scrutinise the practices of companies using significant numbers of self-employed workers. HMRC will also investigate any complaints about alleged abuses of self-employment rules by businesses in order to avoid paying tax and fulfilling their employment obligations.

The issue is that, as the labour market continues to morph due to new technology, the economy struggles to recover from the fallout of recession and uncertainty generated by the Brexit vote, and general standards of living fail to revive, employment practices are coming very much under the spotlight. In this charged environment, the gig economy has become a focal point for fears over potential exploitation, not least because of the use of controversial zero-hours contracts at the low-skilled end of the scale.

Who are the workers? 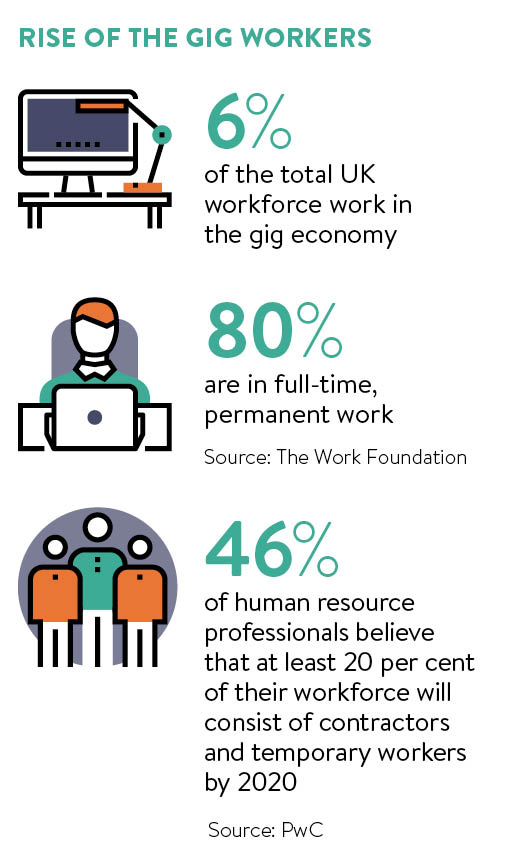 As to how many gig-economy workers there actually are in the UK currently, Lesley Giles, director of The Work Foundation at Lancaster University, says that a lack of clear data makes it difficult to know for certain. But she estimates they are likely to account for no more than 6 per cent of the total UK workforce. In fact, despite the hype, a huge 80 per cent of the people in employment are still in full-time, permanent work.

“There are probably about 1.9 million people who are gig-economy workers,” Ms Giles says. “Most of them are self-employed and the majority are probably highly skilled. In fact, if we’re looking at gig-economy jobs that use online platforms, about two thirds of them will have high levels of skills.”

Despite this situation, workers across the gig economy tend to be polarised into two groups. At the bottom end are the low skilled on whom much of the focus has been to date. These are people often on temporary, fixed-term, zero-hours contracts undertaking a number of jobs in sectors such as retail and hospitality that are generally insecure and low paid. As a result, the power balance is not in their favour, making it an employers’ market.

At the top end, however, are mid to highly-skilled professionals working in areas such as IT and the creative industries. They expect to work flexibly, are relatively well paid and generally wield some power with potential employers as their expertise is more specialised.

But as the popularity of online platforms such as TaskRabbit and PeoplePerHour grows to connect freelancers with potential employers around the world, concerns are beginning to be raised in this area too. A key worry centres on the notion that UK workers are increasingly being forced to compete on price against people in countries where the cost of living is much lower.

As Melanie Lane, head of the employment team at law firm Olswang, points out, a combination of scant legal protection for the genuinely self-employed and the increasing globalisation of the workforce is leading to genuine concern that it will drive a race to the bottom.

“It’s difficult for UK employment law to protect people from the effects of globalisation and the government can’t legislate for self-employed people doing work outside of the country,” she says.

In addition, online platforms that simply introduce businesses to individuals for hire “are less likely to be at risk of claims over breaches of employment law obligations because they’re just putting customers and individual service providers in touch with each other, and leaving them to negotiate terms. However, they do need to be mindful of the rules around operating as employment agencies”, Ms Lane advises.

This situation contrasts sharply with that of sharing-economy companies such as Uber. In a recent Employment Tribunal ruling that is expected to have repercussions across the wider gig economy, Uber’s drivers were classed as workers rather than being self-employed.

This means that, unless the company’s planned appeal succeeds, these workers will be entitled to basic legal rights such as a minimum wage and statutory sick pay, a scenario that has major financial implications for its business model.

But as Andrea Broughton, principal research fellow at the Institute for Employment Studies, says, the situation with online platforms, which is increasingly being termed the “online gig economy”, is more akin to that of a traditional outsourcing-offshoring model.

While she acknowledges that global competition is likely to drive down costs and will result in some work moving offshore, she does not believe it will severely damage the labour market here.

“It’s a complex issue and employers have to weigh up the pros and cons,” she says. “It will work for some companies in certain functions, but there are also quality-control issues and the inconvenience of managing people who are a long way away.”

The Work Foundation’s Ms Giles agrees. “I’m not convinced that it’ll be a big issue. I think there’s a lot of exaggeration in this area, but this kind of work is really quite small in volume terms,” she says.

Nonetheless, PwC forecasts in its 2015 The Future of Work report that the connected work market will be worth £2 billion to the UK economy by 2020. A significant 46 per cent of the human resources professionals questioned also believed that in four years’ time at least 20 per cent of their workforce would consist of contractors and temporary workers.

But the problem, says John Harding, a partner in PwC’s employment business, is that the average employer’s practices are simply not geared to gig-economy ways of working, which is creating a race to the bottom in other ways too.

“They don’t really understand the needs of workers and how to engage them on anything but an hourly rate, which I’m not sure gets the best out of people in terms of service quality,” he says. “So using gig-economy workers only suits certain circumstances, which will vary between industries. It’s something employers will have to give a lot of thought to over the next few years.”

Ingrid Waterfield, director of management consultancy KPMG’s People and Change advisory business, agrees. She says most employers still focus their attention on permanent staff and, despite being used to supporting internal, virtual teams, have failed to expand their thought processes or policies to include temporary staff employed on an ad hoc basis.

“It’s about working out how to leverage opportunities as an organisation, both from a talent and strategic business perspective. But the issue isn’t being thought about in the round as much as it could and the negative press around some workers being treated unfairly is leading to reluctance to think about things in a more creative way,” she concludes. 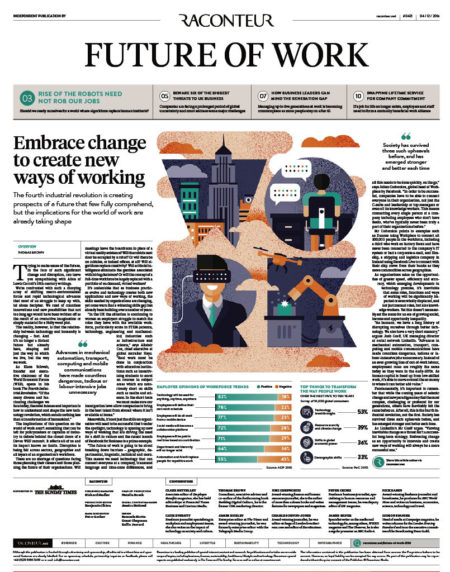