A few months ago, a newspaper columnist had a bright idea. He wanted to nationalise mobile phone networks. His new state-owned monopoly would solve black spots, which are currently too costly to plug, invest in R&D and offer old-fashioned customer service. The single new network could also avoid duplication of masts.

The problem is that mobile phone brands aren’t quite what they seem. Behind the familiar brand names, such as Vodafone, O2 and EE, lies an “ecosystem” of outsourcers.

Take customer care. Vodafone doesn’t handle customer care directly. It relies on Amdocs, an outsourcer. Or when EE sends a bill or wants to know how many iPhones it has in Doncaster, it relies on Ericsson. O2 and Three UK both use Huawei and Tech Mahindra to run their core networks.

Map out the delivery of mobile services and you are talking hundreds or thousands of firms. The number is hard to calculate, because it’s hard to know where to draw the boundary. Do we include the outer fringe of outsourcing, such as media buyers, brand consultants, advertising agencies, data storage providers and data visualisation firms?

Consumers, including newspaper columnists, are rarely aware of this hidden world of outsourcing. 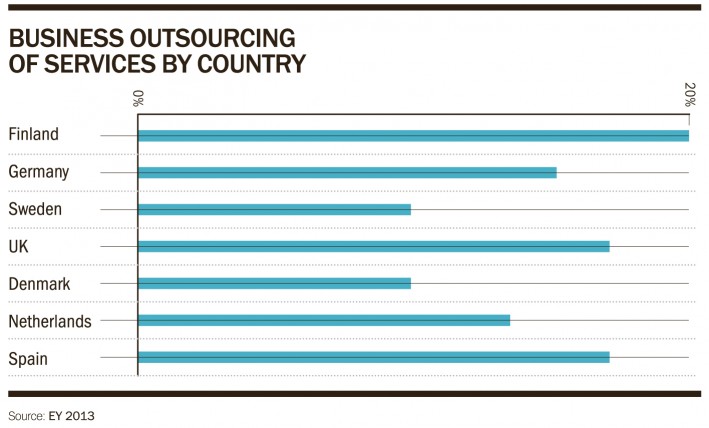 Buying all the firms involved in delivering the mobile network as part of the nationalisation drive would be expensive. Huawei is the largest telecoms maker in the world. It made £2.2 billion profit in 2013. To buy a privately owned firm such as this could cost north of £70 billion. You’d also be buying office managers (Mitie) and mast optimisers (Arieso), to billing specialists (WorldPay) and call centre software writers (Aveya). The total bill could total more than a trillion. It’s just not feasible.

We can’t do it on the cheap and seize them by force. Amdocs is American, Huawei is Chinese, Tech Mahindra is Indian. A British bill of nationalisation wouldn’t work on foreign firms as their assets aren’t based here, nor would sending in the army and grabbing their UK offices. Their technology and infrastructure are based overseas, so you’d be nabbing a few leased rooms and photocopying machines in Reading and Croydon. Futile.

And our new nationalised network would be back to relying on the same private-sector partners just as before, precisely what the critical newspaper columnist was trying to avoid.

It is faintly possible his new “BritMobile” network could try and do many of the services currently outsourced back in-house. That is a tough ask. Take the automated phone answering service. Voice recognition firm Nuance is the dominant supplier. Nuance has 12,000 employees in 39 countries. It shares research with IBM, Samsung’s mobile division and Intel. It has three decades of experience doing just one thing. It has a war chest of patents. Apple’s Siri uses it. Is BritMobile going to compete head to head with Nuance? No chance.

There’s another defect. The UK outsourcing market is a war zone, alive with competing entities. Newcomers appear all the time. The current UK mobile market has 12 networks, bolstered by virtual networks, such as giffgaff, Tesco, talkmobile, Lebara, Co-Op, GT Mobile, Lycamobile and Virgin. A start-up can win a contract with, say, giffgaff to prove their idea works, and then attract interest from Vodafone UK, progressing to Vodafone worldwide if they continue to deliver. Nationalisation kills this mechanism. You either have a contract with BritMobile or nothing. The turbulent forces of innovation are stilled.

A centralised structure can’t compete with the frenzy of innovative outsourcers, each specialising in their own esoteric niche

Just to bang home this point, it is worth emphasising just how Amazonian this ecosystem is. The diversity is incredible. Take something really tiny, such as measuring customer purchasing habits. You’ve got Dunnhumby, Blue Yonder, eCommera, Datasift, Beyond Analysis, Actuate, Mu Sigma, Juniper, GfK, Capgemini, SAP, Teradata, Guavus, Omnico and a long list of others battling it out. We need diversity in this ecosystem. It’s what makes the whole thing work.

Behind these firms lies a second tier of innovators, such as Pure Storage, which last year raised $225 million in funding to compete with EMC in the flash storage industry. Pure Storage provides a service ten times faster and ten times more power efficient than the traditional disk approach. The company relies on a risk-taking client taking a punt on its brand new tech. If a monopoly has, say, a ten-year deal with EMC, there is no way in.

These specialists are often run by entrepreneurial mavericks. Michael Ross built Figleaves.com into a huge online retail business, then sold it for a fortune. Today he runs data analyst eCommera. His brain churns out ideas for sales algorithms, which his roster of mathematicians evaluate with their clients. Some of his ideas work, some don’t and, by Darwinian processes, the industry is moved along. He is unlikely to want to work for a state-owned monolith. Why would he?

It is worth stating bluntly that the reason we have 4G mobile phones capable of streaming high-definition video for the cost of a bottle of house white a month is because of outsourcing. A centralised structure can’t compete with the frenzy of innovative outsourcers, each specialising in their own esoteric niche.

Naturally, the nationalisation plan has other defects. Politicians would meddle. The goals of BritMobile would be disputed – should it prioritise R&D, low-cost calls, universal coverage or 5G networks? Today, if one network opts for a low-cost, low-tech strategy, customers can flee to a rival network favouring high-cost high performance. The fragmented market guarantees all segments can be catered for.

There is a serious point here. Outsourcing is under-appreciated. When we use our mobile phone, we are barely aware of the vast coalition of partners who come together to make our calls possible. The same is true for other industries, from automotive and manufacturing, to supermarkets and cinema. Consumers may not know it, but it matters.

Quickfire Q&A: Why do you outsource?

Also in Future of Outsourcing 2015