Despite its role as a major provider of low-cost oil and gas, in addition to its position as the world’s eighth largest emitter, the United Arab Emirates (UAE) is successfully diversifying its economy through the deployment of low-carbon infrastructure.

By 2016 oil revenues constituted less than 50 per cent of the UAE’s export receipts. It recently announced plans that, by 2050, 44 per cent of the country’s energy usage would come from renewable sources, 38 per cent from gas, 12 per cent from cleaner fossil fuel and 6 per cent from nuclear power. By 2035, it expects to deliver 61 gigawatts (GW) of additional solar, which is a remarkable goal given that installed capacity in all of Saudi Arabia was 61GW in 2016.  And the funds are available to support the rhetoric, with a commitment of £134 billion to achieve these aims.

While much of the region’s push into low-carbon infrastructure has been in the power sector, it is developing new heating and cooling projects, desalination combined with renewables, future city planning, electric vehicles and exploring best ways to finance such approaches.  One of the most important projects for effecting such change has been the Abu Dhabi-based Masdar Initiative. It was instituted to act as a developer of clean energy power projects, and sustainable urban planning and development, and drive innovation across a range of clean technologies.

One example of the scale of change is the recent announcement by Masdar of the launch of construction on the 800 megawatt phase three of the Mohammed bin Rashid Al Maktoum Solar Park in Dubai. Through Shuaa Energy 2, a joint venture between Dubai  Electricity and Water Authority (60 per cent), Masdar (24 per cent) and EDF  Energies Nouvelles (16 per cent), when complete this will be the largest single solar plant in the world, providing 5GW of solar power by 2030.

The Masdar-led consortium won the project after offering the lowest recorded bid for a solar plant at the time, valued at 2.99 US cents per kilowatt hour. It’s the achievement of this goal that is transforming the infrastructure playing field around the world.  Bader Saeed Al Lamki, executive director of clean energy at Masdar, says: “The way we generate and consume power is expected to change; we’re on the verge of a new paradigm. The fundamentals of the sector are so strong that it makes commercial sense.

“We are optimistic for the future. Renewable energy fundamentals have been established quite strongly – it’s a viable economic choice on the table, driven by technological evolution and R&D, reduced price and regulatory frameworks for investors that have matured.”

Masdar’s approach goes far beyond energy and the linking of utilities needs with generation options. The company has not only shown a strong focus on providing energy security, while offsetting carbon emissions and diesel use, but has also worked to develop Masdar City, which offers a visionary “greenprint” for sustainable urban development. Indeed, according to Yousef Baselaibthe, executive director of Masdar Sustainable Real Estate, the cost of operating within Masdar City is now equal to anywhere else in the region.

Christian Hellmund, partner in the energy and renewables team at law firm DWF, says: “Investor confidence is key to driving the development of low-carbon infrastructure in the Middle East and North Africa (MENA). This stems in part from security over assets and the promise of long-term income streams. As the cost of deploying low-carbon technologies goes down and international pressure to commit to climate change agreements jumps up, the stage is set for low-carbon infrastructure to take flight.”

What matters is how these developments are connected and can provide knowledge, experience and the potential for industrial learning. Improvements in district cooling efficiency, an increasingly important requirement for a warming world, are being trialled. Renewables-powered desalination is contributing to the region’s overall water security with the Ghantoot project and Abu Dhabi has built a huge storage system under the Liwa Desert to ensure that water is preserved. In case of emergencies, the reserve can provide about 100 million litres of water a day to the country’s residents. Dubai’s new solar park is even intended to print its own 3D lab.

What makes the UAE special is quite specific to the region. As Mr Hellmund points out: “Its vast, uninhabited land strips create the perfect place to build large-scale low-carbon energy generating plants. Large solar plants are able to harvest more energy from the sun due to the more favourable angle of the sun rays than similar plants located further away from the Equator.

“Finally, many countries in MENA are blessed with the ability to construct new, innovative energy transmission and distribution networks, rather than having to upgrade older existing ones.”

This doesn’t mean that other regions may not be well placed to take advantage of the opportunity to bypass infrastructure development, from telecoms to power, rail, water, roads and more. One of the key questions surrounding the continuing development of renewables is the speed at which energy transition will take place as this will drive investor interest in new opportunities. There are strong disagreements between experts regarding dates for peak oil consumption, which range from the International Energy Agency’s projection of 2040 to some as soon as 2021. The speed of energy transition will be key to changes in infrastructure as a whole.

There are analysts who see what is now happening with energy as a structural shift in the way the economy works. As Carbon Tracker’s Kingsmill Bond says: “The ‘business as usual models’ favoured by incumbents are simply wrong.” He points out that the last time we saw such a shift in energy was from biomass to hydrocarbons after 1800 and that once the “foundation technology” changes, so does everything else.

Markets are driven by tipping points, which means they are driven by incremental changes; they look to where new growth lies. With the dramatic fall in the cost of wind and solar over recent years, it’s possible investors may soon lose interest in high-carbon infrastructure altogether. 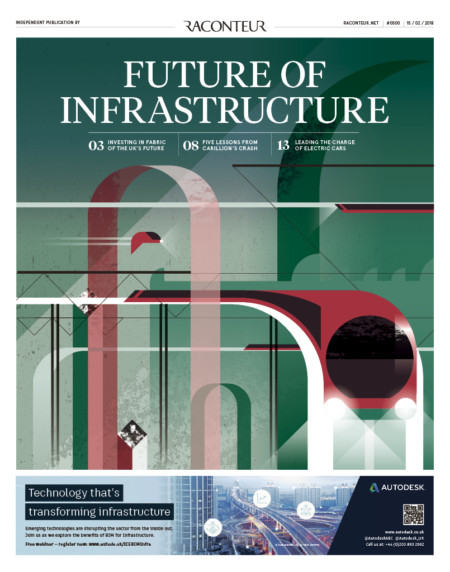