Take a look at almost anything written about engagement and it is almost a given the words “staff” or “employee” will feature. Globally, 87 per cent of employees are not engaged, proclaims Gallup; employee disengagement costs the UK economy £340 billion a year in lost productivity, according to Hay Group; and so the list could go on.

But the eagle-eyed may have noticed all these statistics ignore one key person – the leader. If employees’ engagement oscillates, it’s surely common sense leaders suffer the same ups and downs. But here’s the $64,000 question: how much does this really matter?

“It’s absolutely the case leaders set the tone. It’s they who set the standard, so leaders actually need to be even more engaged,” argues Kate Cooper, head of applied research and policy at the Institute of Leadership and Management. “Even when things aren’t going well, they almost need to rise above this.”

Even though academics have veered away from the great leaders’ mantra, preferring a holacratic, everyone-in-it-together approach to organisational design, what has not disappeared is the notion companies can either have inspiring leaders or leaders who inspire disengagement.

A recent Bain & Company study found 60 per cent of employees didn’t know their company’s goals, strategies and tactics, so if leaders haven’t clarified this vital ingredient for creating engagement, responsibility for poor business performance lies squarely on their shoulders.

“It’s interesting lots of leaders still don’t focus on their own engagement or what I call their own energy,” says Charlene Li, author of The New York Times best seller, The Engaged Leader. “Yet it’s even more important they maintain this over time.”

According to Ms Li, the tale-tale signs leaders are becoming disengaged are when they go missing in action, take longer to return e-mails or calls, say “no” more often, and start to support and promote those who most agree with them. And when this attitude sets in, it can have a corrosive impact on the bottom line. Staff who are “actively disengaged” – around 20 per cent, according to Gallup – specifically say they do not find their work or their leader motivating. 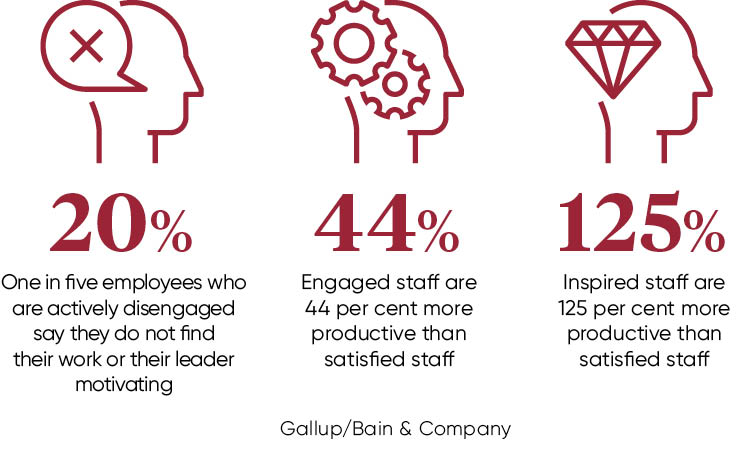 “Leadership is a contact sport,” says Chris Bones, professor of creativity and leadership at Manchester Business School, and partner at Good Growth. “Being an engaged leader is about being visible and present. What’s interesting though is that a reason leaders often become disengaged is because it can take time for staff to believe them. Paradoxically, leaders can become disengaged just at the point when their staff start to buy in to their vision.”

The power of engaged leadership

One leader acutely aware of the power of engaged leadership is Ken Allen, chief executive of DHL Express, who in 2013 launched what business journal HR magazine described as the “world’s biggest engagement scheme”. In what was a do-or-die decision, as the company had lost €2.8 billion between 2002 and 2009, the business has since transformed itself.

But according to Mr Allen, engagement starts from him and particularly from being imbued in the business. “I’m a company man,” he says. “I’ve been here since 1985. Today I see lots of leaders parachuted into businesses, but they will only inspire their staff if they embrace the good things that made the business successful and don’t try to do things ‘their way’.

“Until every employee thinks they can grow personally too, leaders can’t grow their business, so it’s leaders who need to create stories. I take it upon myself to be in front of people all the time, delivering my message. I don’t want to be seen as a suit from head office.”

Because human resources literature focuses on “authentic leadership” and about being honest with staff, Ms Cooper argues leaders can be confused about the sort of engagement they have to present to staff. For instance, whether they should admit they’re feeling low or whether being emotionally bare facilitates better “followership”.

She says: “Authenticity is about saying ‘I’m having a bad day’. That’s fine, but the best leaders still need to present control. What leaders must do is create a team around them, one that has their backing rather than waits for them to fail.

“Engagement needs to be a strategic activity. Leaders need to recognise what sort of person they are. If they thrive setting businesses up and are engaged doing that, fine. But, if they also know their enthusiasm wanes, they need to know when it’s best to bring someone else in who has more energy.”

The good news is as more leaders understand the bottom-line value of having engaged staff, the more leaders themselves are understanding their role in it.

Eric Garton, partner at Bain & Company, and author of Time, Talent and Energy, says leaders need all three of these qualities, but it’s their energy or engagement that has the most power to transform. “All businesses suffer organisational drag, but the most drag is caused by lacklustre leadership,” he says. “Engaged staff are 44 per cent more productive than satisfied staff, but employees who are inspired are 125 per cent more productive than a satisfied staff.”

Mr Garton argues engaged leaders “presume trust and empower accordingly”. He says: “Millennial companies have inherently more energy because their leaders don’t tend to micro-manage. While some leaders get worn down by their own organisation, the best don’t worry about people challenging them. The best leaders demonstrate engagement by owning it – simple as that.” That’s the challenge. Now it’s up to leaders to embrace it. 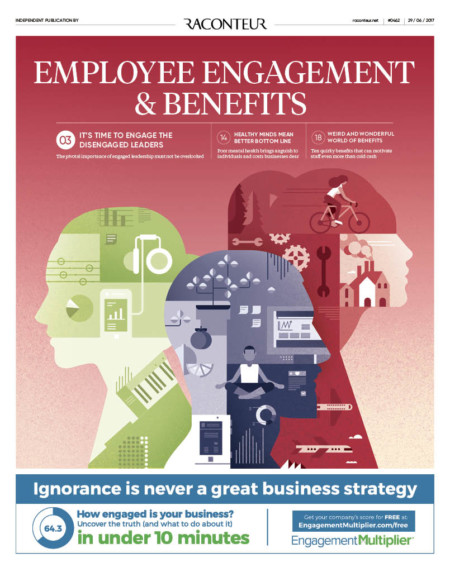