The love affair with coffee is still growing too – there are now more than 24,000 branded coffee shops in the UK, according to market researchers Allegra, and the number is growing by more than 5% a year.

These coffee shops are increasingly being used for business meetings, driven by the rise in flexible and home working, the greater ownership of smartphones and the availability of free Wi-Fi in many of these shops.

Data from SAP Concur showed that the 27 million users of the company’s expense claim system were having 10,000 meetings every month in Starbucks alone, making the coffee chain the top location for out-of-office business meetings.

Yet, the interaction between coffee and business is not new. In 1663, there were more than 80 coffee houses within the walls of the City of London where people met to discuss business. The most famous of all of these – Lloyd’s Coffee House – opened in 1686 on Tower Street and became the most important meeting place to discuss shipping and insurance. Lloyd’s of London, which still bears shop owner Edward Lloyd’s name, is still with us more than 330 years later.

While a coffee shop was the perfect place to do business in 17th century London, it that still the case?

Cafes and coffee shops are noisy places thanks to coffee grinders, blaring music and general chatter. A 2017 survey for the charity Action on Hearing Loss found noise levels of more than 97 decibels in one café, as noisy as standing next to a tractor or in a nightclub.

2017 survey found noise levels of more than 97 decibels in one café, as noisy as standing next to a tractor or in a nightclub

That noise is affecting your ability do business well. Research by Ravi Mehta of the University of Illinois found that while the moderate levels of noise experienced in some coffee shops can actually help creativity, as soon as noise levels increase above 85 decibels, the amount of information people can process and creativity falls.

That is the science but there are other concerns too, most notably security.

A survey by connectivity company iPass among chief information and technology officers from 500 companies found that of all the locations where employees can connect to public Wi-Fi, coffee shops  were viewed as by far the most risky. A majority of chief technology officers also believed that C-level employees, including the CEO, are the highest risk targets as they travel regularly on business and have privileged access to highly sensitive and/or valuable corporate data and systems.

Many organisations have policies that advise staff working out of the office not to work in crowded public locations.

The University of the West of England, for example, in its remote access policy, says, “Working on confidential information should be avoided in public spaces e.g. coffee shops or trains, due to the possibility of unauthorised individuals viewing or overhearing this information.”

Other organisations insist that employees who do use them put privacy screens on their laptops so that any sensitive documents and passwords cannot be seen.

Chris Ward, entrepreneur, GB cyclist and author of the paean to coffee shop working culture Out of Office says, “I have employed a lot of people and have never worried about privacy in coffee shops. There is so much information out there. Who is actually interested in what I am talking about?”

A few years ago Ward was asked to help get the CEOs of 35 mobile phone companies to agree to send texts to all of their users promoting the UN’s Global Goals campaign.

“I did it all from coffee shops,” says Ward.

Not all coffee shops want people working in them in any case and not just because they don’t want someone nursing a single flat white for hours. Dough Lover in Brighton has a no laptop policy and doesn’t offer Wi-Fi. The owners say, “A lot of fuss has been made about our no laptops/tablets policy. It’s nothing personal. It’s not a publicity stunt either.  We simply prefer to put our focus firmly on our carefully crafted food and drinks.”

A growing number of companies are eschewing coffee shops altogether and using co-working spaces and flexible business clubs and centres instead.

A 2017 survey for Regus found that around 20% of remote workers use dedicated business centres compared with around 10% who work in a coffee shop when remote working.

One company which is seeing the benefits of this is The Clubhouse, the flexible business club and meeting space provider which has four locations across London: Mayfair, St James’s, Bank and Holborn.

David Kilpatrick of business intelligence solutions company Altius, based in Godalming, is a regular user of The Clubhouse.

“Logistically it is a lot easier for our customers to meet us in central London,” he says. “We had had enough of sitting in Costa Coffee and Starbucks drinking lattes all day and we needed a more professional place for planning our business and having our meetings. The beauty of The Clubhouse is that it is a professional working environment with great meeting rooms, which create the right image when our customers come in.”

Nick Robeson, managing partner of executive search company Boyden, often uses the Clubhouse to interview candidates on the neutral territory of The Clubhouse in Bank. Robeson says, “The Clubhouse provides us with the flexibility we desire as we grow, combined with the level of professionalism and discretion our clients expect from a leading executive search firm.”

With figures from the Office for National Statistics showing that remote working has been growing steadily over the last two decades, the number of people having to choose a suitable environment to work or have a meeting looks set to increase.

While the idea of the coffee shop entrepreneur is a potent one, the reality is that while having on-tap flat whites and paninis close at hand is very desirable, the noise and privacy concerns of coffee shops make them unsuitable for many business people. And the rise in remote working means your local Starbucks is only going to get busier. 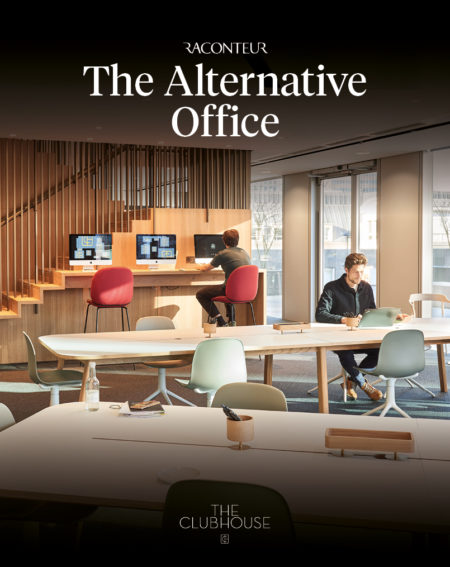 Does cafe culture really have a place in business?

Also in The Alternative Office 2018