As we enter what has been dubbed “the climate decade”, is it enough for companies to just talk up their ambitions to become carbon neutral? Or should they be taking further action and starting to look at ways in which their operations can become climate positive?

In recent months there has a been a slew of corporate announcements, as some of the world’s biggest companies have ramped up promises to cut their carbon footprint. In January, Microsoft pledged to become carbon negative by 2030, swiftly followed by a promise from Starbucks to become “resource positive” over the next decade and O2’s decision to offer the UK’s first net-zero carbon mobile phone network by 2025.

If you aim for a positive impact, then it’s a positive objective. It means you will become part of the solution rather than the problem

According to Mathias Lelievre, chief executive at global sustainability consultants ENGIE Impact: “Recent environmental disasters around the world, coupled with stakeholder demands, have accelerated the need for these companies to make moves beyond pledges.”

He expects to see efforts to reduce emissions, cut waste and improve efficiency become a primary focus for companies across all sectors and industries, with new operational processes, supply chain innovations and company cultures reset.

“It is, undoubtedly, a huge challenge, but businesses can no longer afford to have this as a secondary priority or view it as an operational initiative alone. It must transcend the organisation,” Lelievre says.

Jason Tundermann, vice president of business development at LevelTen Energy, a renewable energy platform, agrees. “Corporations are experiencing pressure from many different stakeholders, including customers, employees and even major investors, to reduce their greenhouse gas emissions.

“Greenwashing isn’t going to cut it anymore; these external groups want more transparency when it comes to reporting and they want to see a clear plan in place to reduce emissions now.”

Reducing emissions is only the first step

So how can businesses curb their emissions and start running an organisation that isn’t just carbon neutral, but which actually has a positive effect on the climate?

One option is a power purchase agreement, or PPA, when a corporation directly contributes to a new renewable energy project by agreeing to pay the developer a fixed price for energy when the project comes online. It’s a way of eliminating the carbon impact of purchased energy, while also adding green energy to the grid.

“With one agreement, a corporation can reduce their emissions on a massive scale and they can point to a new wind or solar project that was built as a direct result of their actions,” says Tundermann.

Many businesses turn to carbon off-setting as a way of reducing their emissions, buying carbon credits to compensate for the CO2 they emit. These credits are then used to support environmental projects, such as reforestation schemes, but critics argue that unless these schemes are well monitored, all they actually do is “pass the carbon buck”.

“Doing something positive elsewhere will not remove the problem created by emitting the pollutants in the first place; it will only mitigate for it,” says Mats W. Lundberg, sustainable business manager at engineering firm Sandvik Materials Technology, which has committed to halve its CO2 impact by 2030.

While activities such as planting trees, drilling holes for clean water and funding solar panels are all commendable, he says, they need to be done in combination with activities that are also cutting the actual emissions from business operations.

“The only way to introduce true operational resilience is not to make a negative impact on the environment. Being carbon neutral, or hitting net zero through offsetting, just means doing extra good things and, if not combined with improvements in business operations, they are offering a ‘free pass’ to counteract the negative emissions,” says Lundberg.

One part of a company’s carbon footprint that is often overlooked is created by its use of digital technology. The figures are staggering; according to the carbon think tank The Shift Project, ICT contributes about 4 per cent of all global greenhouse gas emissions, twice as much as the aviation industry.

Ecosia offers companies an option, having developed a search engine that tackles the embodied emissions associated with the internet. All the company’s searches are powered by green energy from its own solar plants, explains chief executive Christian Kroll, and for every 50 searches, the not-for-profit company plants a tree. So far, more than 87 million have been planted, with companies such as Marks & Spencer, EY and a clutch of UK universities all using the search engine. 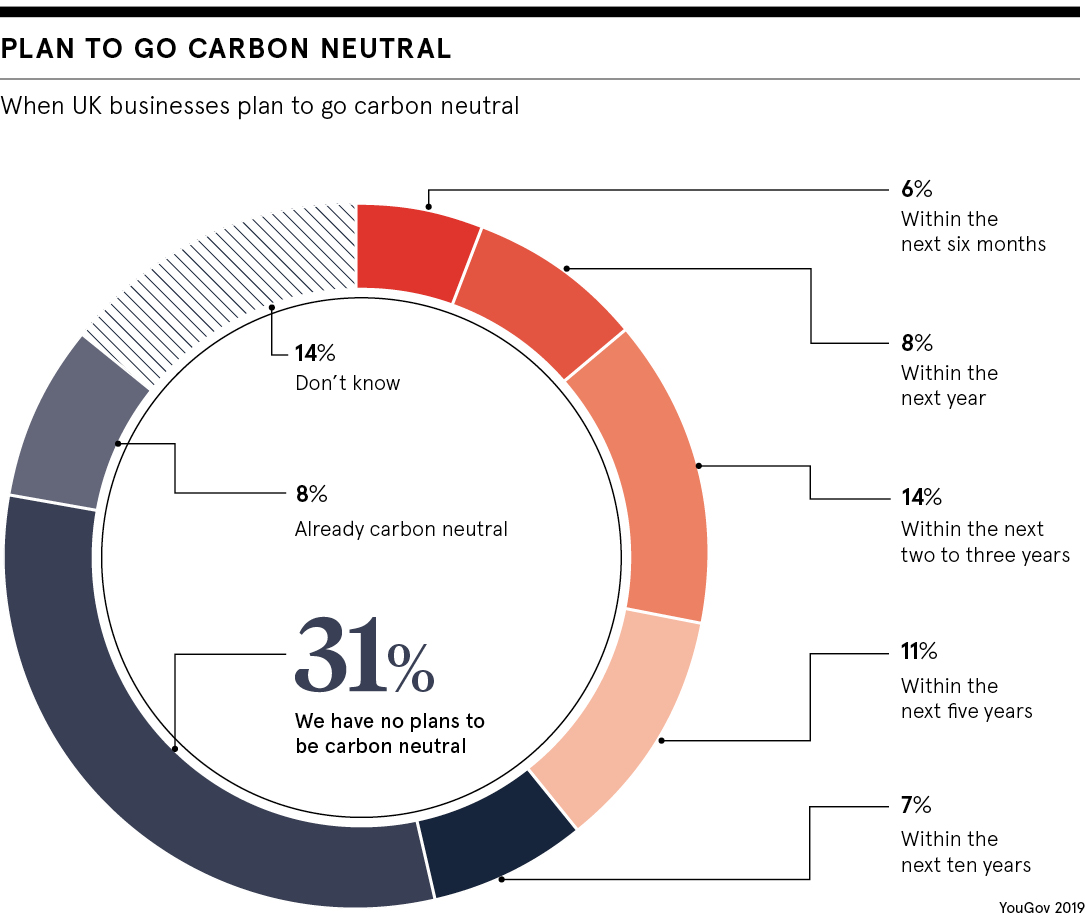 And Ecosia is set to open its second solar plant this year, as part of its goal to produce twice as much green energy as it actually needs, extra production which, says Kroll, will push dirty energy out of the grid.

“There are a lot of companies who say ‘yes we want to become carbon neutral by 2030’, but that still won’t be enough,” he says. “If you change your business model, or shift your business priorities, there is no reason why a company should stop at being just carbon neutral. Since we are living in the age of climate change, we have to start thinking differently.”

Marga Hoek, sustainable business specialist and author of The Trillion Dollar Shift, which looks at the business opportunities opened up by the United Nation’s sustainable development goals, thinks companies need to be ambitious. She agrees they should start to look beyond simply becoming carbon neutral and actually aim to make a positive impact.

“Less bad is not good enough,” says Hoek. “If you aim for a positive impact, then it’s a positive objective. It means that a company will become part of the solution rather than the problem.” This is the best way to access new markets that issues like the climate crisis will open up, she adds.

Companies edging towards climate positivity can also enjoy a reputational boost, which is crucial when you consider that in ten years time, 75 per cent of the global workforce will be millennials, who are far more progressive in prioritising sustainability and also want to work for companies that are purpose driven.

But there is a more fundamental change. Historically, the talk has always been of decoupling growth and impact, but if companies are now driving to have a positive impact, then this thinking is turned on its head. “Now we need to couple growth and impact because now we say the bigger the company is, the better. That’s a thrilling thought because it means the world is served best the more your company grows. It’s a totally new way of thinking,” Hoek concludes.

This year IKEA bucked a trend. It was the first year in which the company’s climate footprint decreased, by 4.3 per cent, while at the same time retail sales grew by 6.5 per cent. The figures were achieved through a significant increase in the renewable energy used to produce IKEA’s products, along with the greater energy efficiency of its lighting and appliance ranges.

As Andreas Ahrens, head of climate at the Inter IKEA Group, explains: “The IKEA commitment to become climate positive by 2030 means to reduce more greenhouse gas emissions than the IKEA value chain emits, while growing the IKEA business.

“This includes strong actions to address not only how IKEA impacts climate change, but also how climate change impacts the IKEA business. This is critical, especially since we are a material-intensive company.”

The company has committed to invest €200 million to speed up the transformation towards climate positivity, with the investment channelled to the IKEA supply chain and how it uses renewable energy, and also removing carbon from the atmosphere through reforestation and better forestry management.

The business has also eschewed carbon offsetting, committing instead to ensure carbon remains stored in its products longer by supporting the circular economy.

IKEA prides itself on the long-term partnerships it has with its suppliers, says Ahrens, and the way in which this supports innovation. For example, he explains: “Glue in boards stand for 6 per cent of the total IKEA climate footprint and we have several innovation projects with partners to find a bio-based glue with a significantly less climate footprint.”

There are even plans to introduce a plant-based version of IKEA’s popular meatballs, eliminating the carbon embodied in the cattle industry. 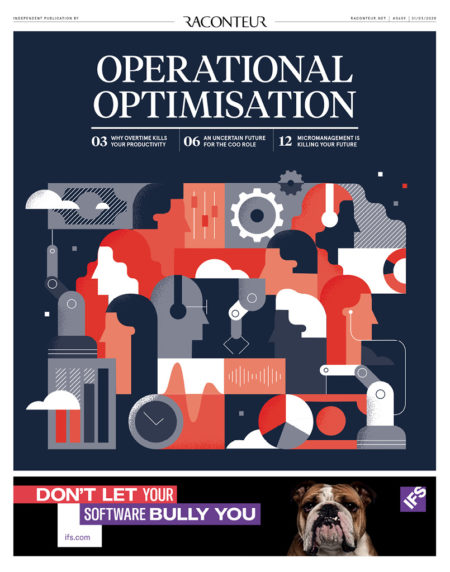