If the tumultuous events of this year from Brexit to the election of Donald Trump offer a lesson to business, it is that consumers are willing to challenge the status quo, punish “elites” and take a risk.

No wonder the world looks a more unpredictable place than 12 months ago. Businesses have proved more adept at protecting their brand and reputation than many politicians. As the old marketing saying goes, a consumer brand has to get “elected” by customers every day when they go shopping, not just once every four or five years when there’s an election.

Companies that invest in their brand have a track record of growing faster. An investment in the top ten most highly valued brands in the advertising giant WPP’s annual survey of the top 100 global brands would have outperformed the S&P 500 Index of stock market companies by more than 70 per cent in the last decade. Investing in a brand “clearly pays off in the short and long term”, WPP’s chief executive Sir Martin Sorrell says.

However, business and politics share similar challenges because social media and digital technology mean crises unfold faster than before, with more unpredictable results for their brand and reputation.

Samsung had to carry out a global recall of its Galaxy Note mobile handset because of a series of battery explosions this year. When one unhappy user posted a video of his charred phone on YouTube at the end of August, it got 1.3 million views. Samsung initially tried to play down what it called “a tiny problem” with its manufacturing process, but it failed to convince consumers, resulting in the recall and a £4-billion hit to its profits.

Tim Burt, senior managing director at Teneo Blue Rubicon, a leading communications and corporate reputation management agency, says: “Everyone has a fear of a crisis going viral on social media. This is a particular threat to consumer-facing brands, where criticism can be shared, mashed up, spliced with video and distributed globally. It has become one of the major risk factors faced by any company that depends on online engagement.”

The Volkswagen emissions-rigging scandal and the TalkTalk customer cyber breach are other recent examples of reputational crises that have had a knock-on effect to the company’s profits and share price. 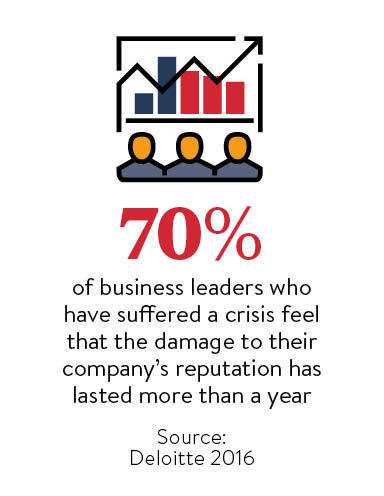 Seventy per cent of business leaders who have suffered a crisis feel that the damage to their company’s reputation has lasted more than a year, according to a Deloitte global survey of 300 board directors this year.

In a world where trust and authenticity matter, bigger is not always better for a brand as it grows in size. Smaller brands may have advantages because they can be more nimble and will often have closer links to their core market.

Brand and reputation management has become a boardroom issue for companies of all sizes, especially as the modern breed of chief executive is increasingly likely to be active on social media, and see the opportunities and risks first hand.

Mr Burt says: “The rise of online scrutiny has created significant anxiety in the corporate world. Suddenly consumers, shareholders, analysts and regulators can interact with each other in a social media environment to amplify criticism of a company or its management, fuelling negative coverage.”

As the Samsung case illustrated, the first instinct of many people is to publish negative comments about a brand online, usually on social channels or review websites.

“Clearly, sometimes this megaphone trend – he who shouts loudest invariably gets heard in an online world – is fully justified and companies should be called to account,” Mr Burt says. “But in an era of fake news, it is also dangerous, with a rush to judgment that is hard to manage. What this requires is more thoughtful online reputation management. Companies need effective tools and strategies to explain themselves digitally.”

The relentless, ubiquitous nature of the online world means every company now has a media profile that they must manage

Communications and marketing experts say companies must be vigilant in monitoring their reputation, especially online, and prepare for a crisis by doing simulations and creating a “playbook” to respond.

The worst reputational crises often occur when companies are unprepared. Fewer than half of the 300 board directors surveyed by Deloitte had a crisis playbook ready to use and one-third did not even know if one existed in their company.

While it makes sense for companies to take a thoughtful, strategic approach to brand and reputation, Mr Trump’s election-winning performance has challenged convention because he aggressively attacked his critics, disregarded the facts and stuck to his own “megaphone” message.

He is a unique case because he already had a powerful personal brand and tore up traditional rules of political communication.

But it seems likely that others in politics, business and beyond will follow this lead because of his success. It’s a worrying development because it could lead to a further distortion of the truth in a world where companies already have to deal with problems such as counterfeiting in medicine and piracy of intellectual property.

The relentless, ubiquitous nature of the online world means every company now has a media profile that they must manage. 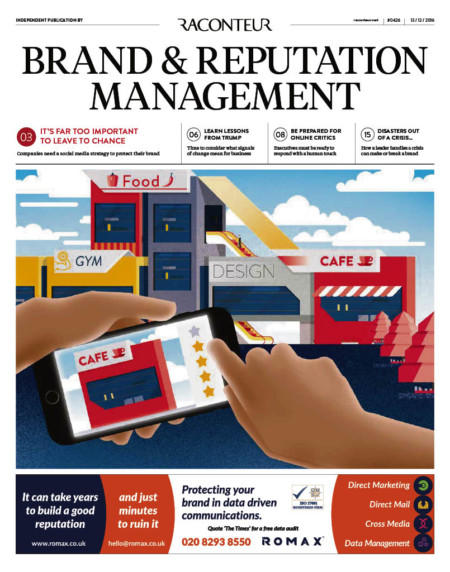